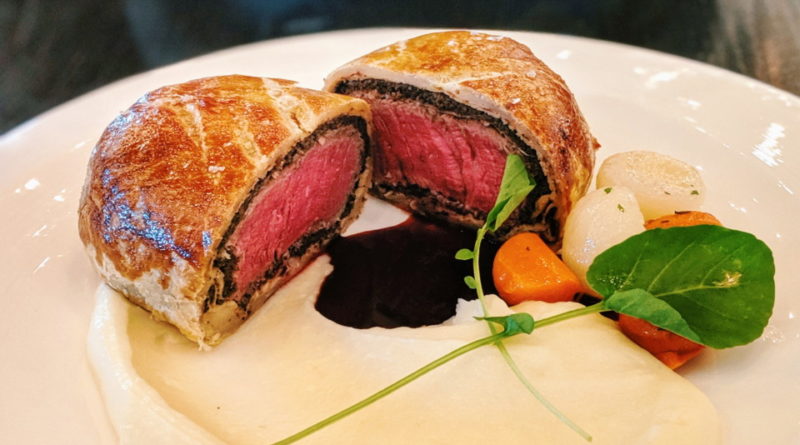 I don’t know about you, but I’d say watching the fiery battle between the red and blue team as well as the swearing by Chef Ramsay on Hell’s Kitchen was a big part of my childhood. I used to watch Hell’s Kitchen every season and was mesmerized by the entire process of cooking at a fine dining restaurant. The stress, the fire, the precision…. what a combination. 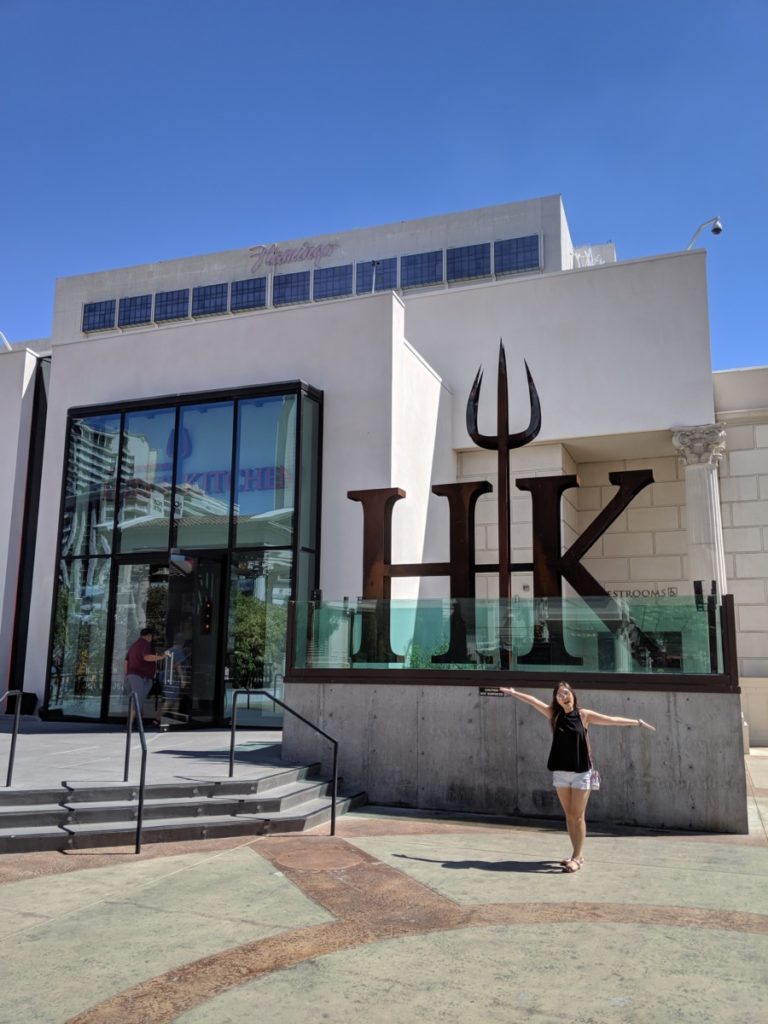 I FINALLY decided to open up my wallet and try Gordon Ramsay’s Hell’s Kitchen in Las Vegas recently and I gotta say, it did NOT disappoint. From the big HK and pitchfork sign at the front to the blue/red decor inside to separate the teams, everything looked exactly like what I saw in the show. 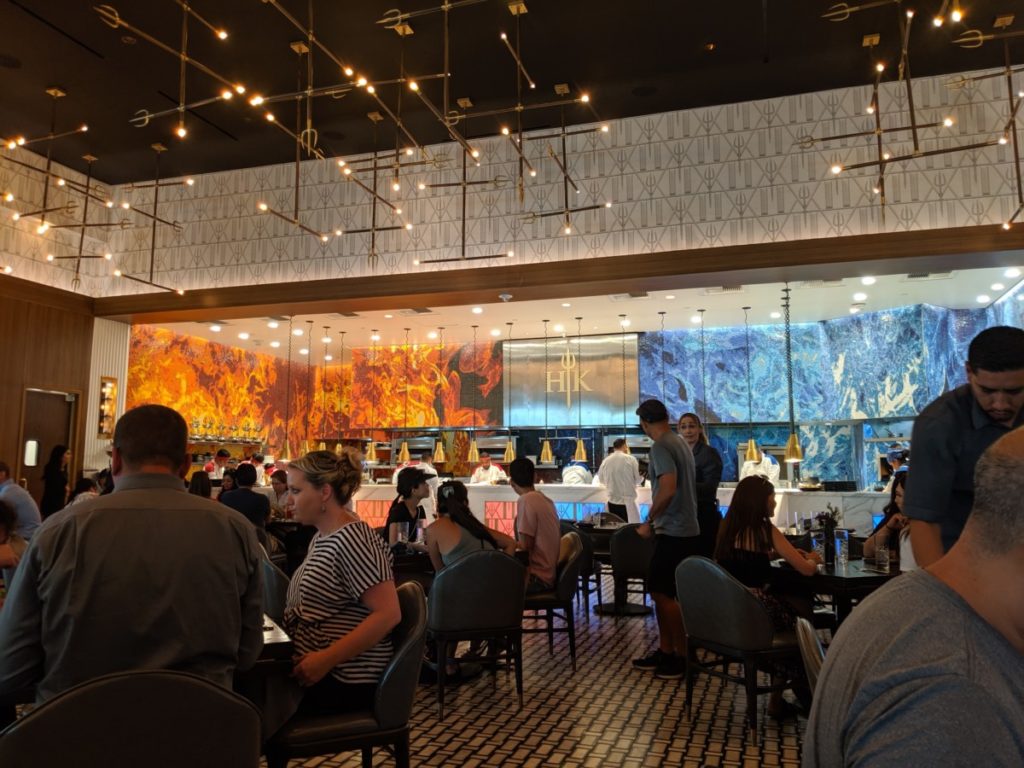 We chose the lunch service thinking we wanted to go for their lunch prix fixe three-course menu ($62 USD) but in the end we decided to go a la carte. Neither the caesar salad nor spring onion soup sounded interesting and we really wanted to try their other well known appetizers.

We got the Lobster Risotto ($25.95 USD) and not joking this was the best risotto I’ve ever had in my life. 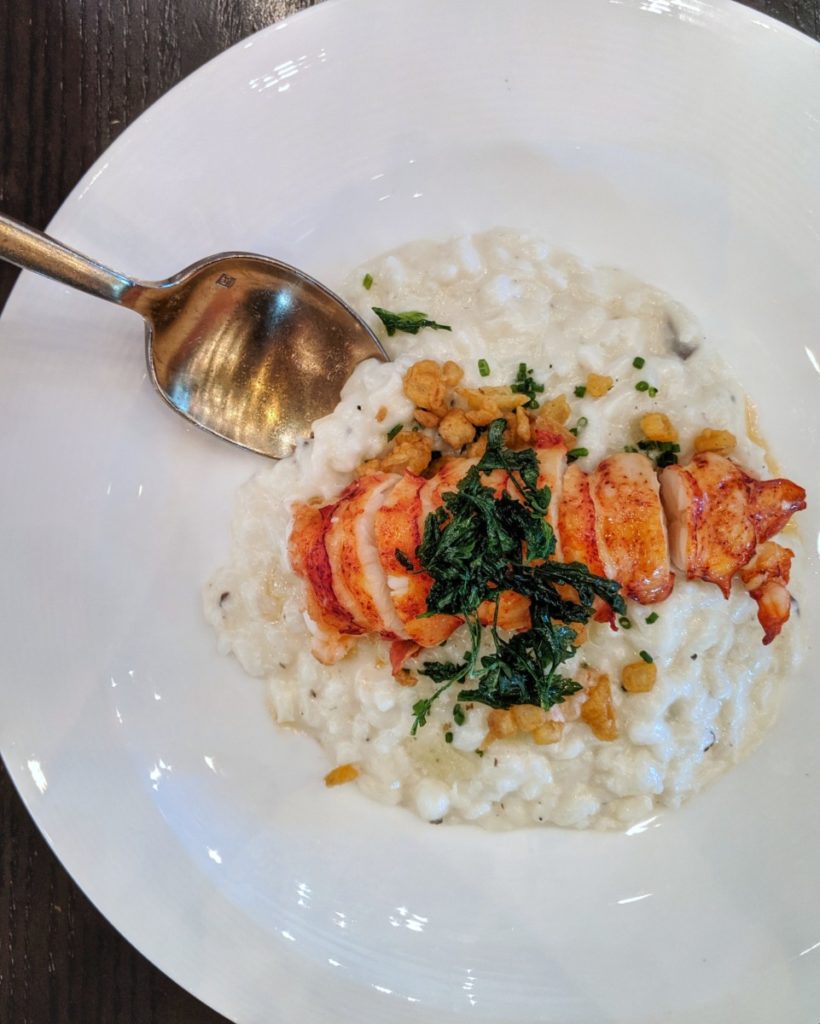 The butter poached lobster tail was buttery yet buoyant, the hint of truffle fit perfectly with the rich risotto, and the crispy onions gave it a bit of crunchy texture. The photo makes this dish look big but in reality, you can finish it in 8 bites. 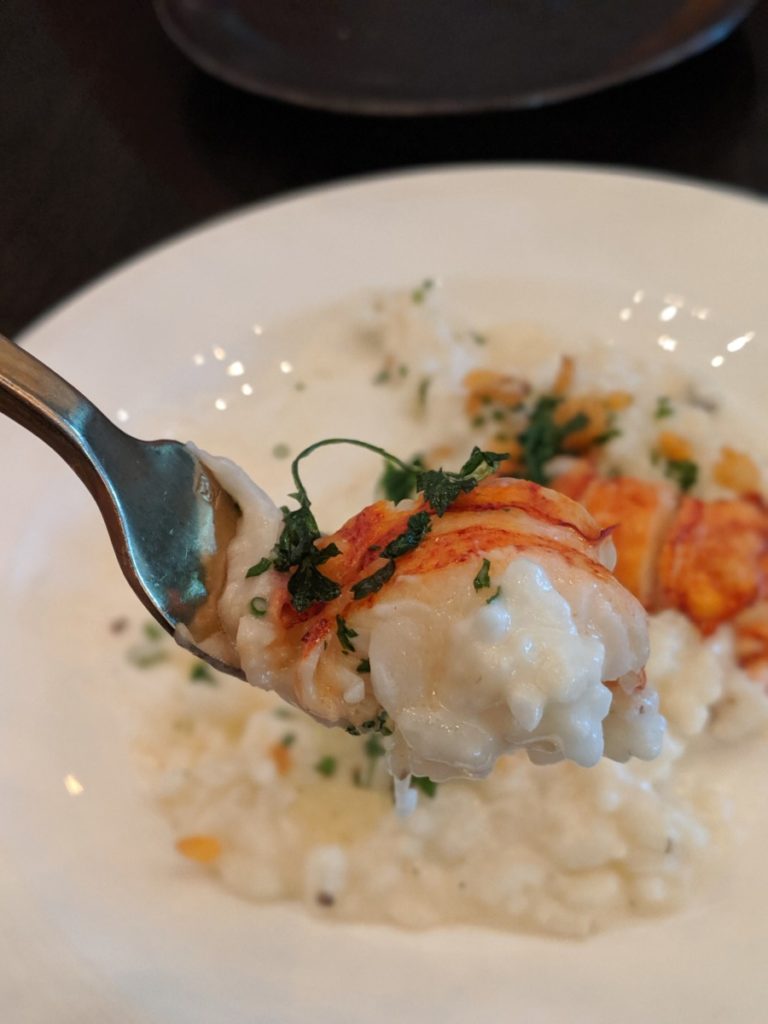 You must savour those 8 bites though, and every bite to me… was worth it. 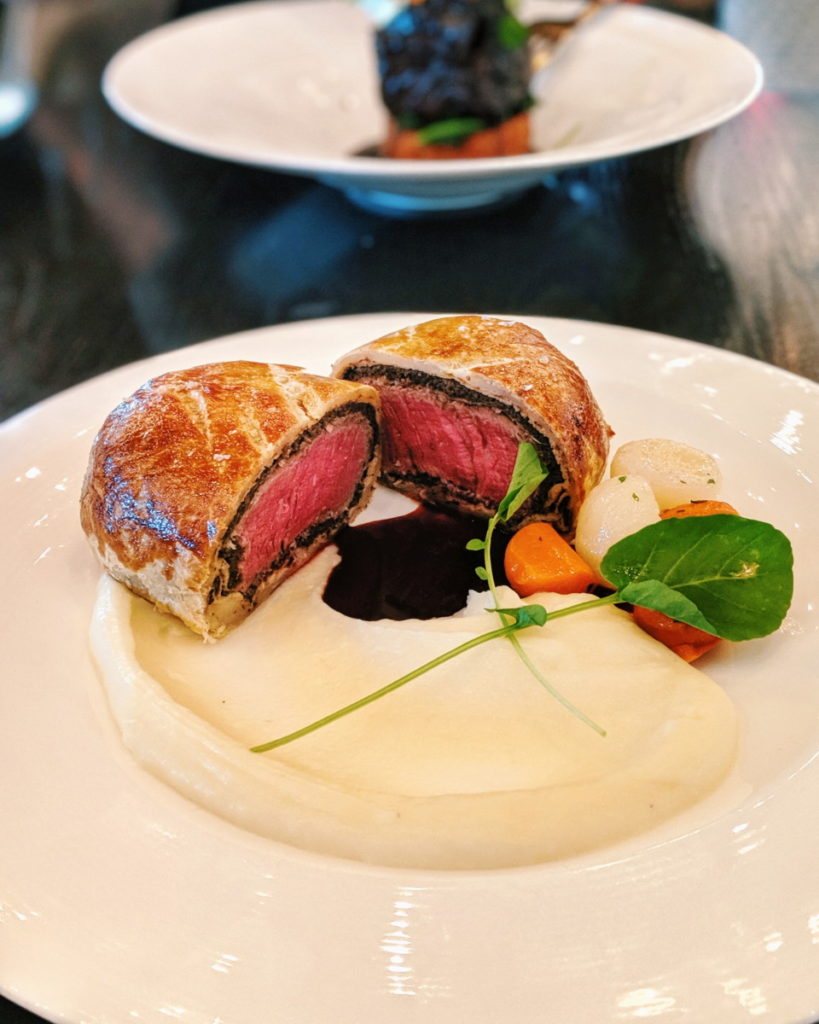 The famous Chef Ramsay Beef Wellington ($59.95 USD) can be ordered a la carte during lunch (even though it’s not on the menu) and it was as perfect as I expected. Tasting this Beef Wellington, I finally know what it SHOULD taste like (not like some other Beef Wellingtons I’ve had in Vancouver). The crust was as flaky as I expected, the mushroom was as earthy and wholesome as I wanted, and the filet mignon just melted in my mouth. Now, this was an extremely expensive dish and while it was amazing, I probably wouldn’t and can’t afford to eat this more than once or twice in my life. 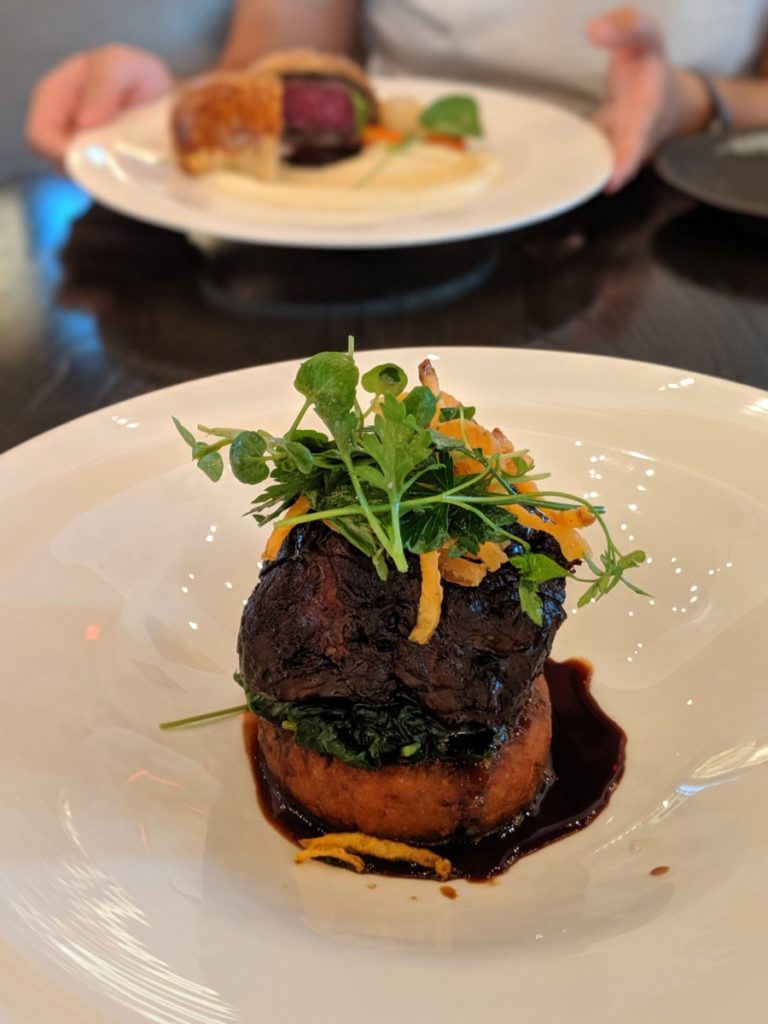 Meta Knight and I shared the Beef Wellington as well as the Braised Short Rib ($39.95 USD). The waitress raved about this so we decided to give it a try. It sat on top of a fried yukon potato cake which soaked up the juices nicely. All in all, this was pretty good but a tad salty for us. I wouldn’t highly recommend this. 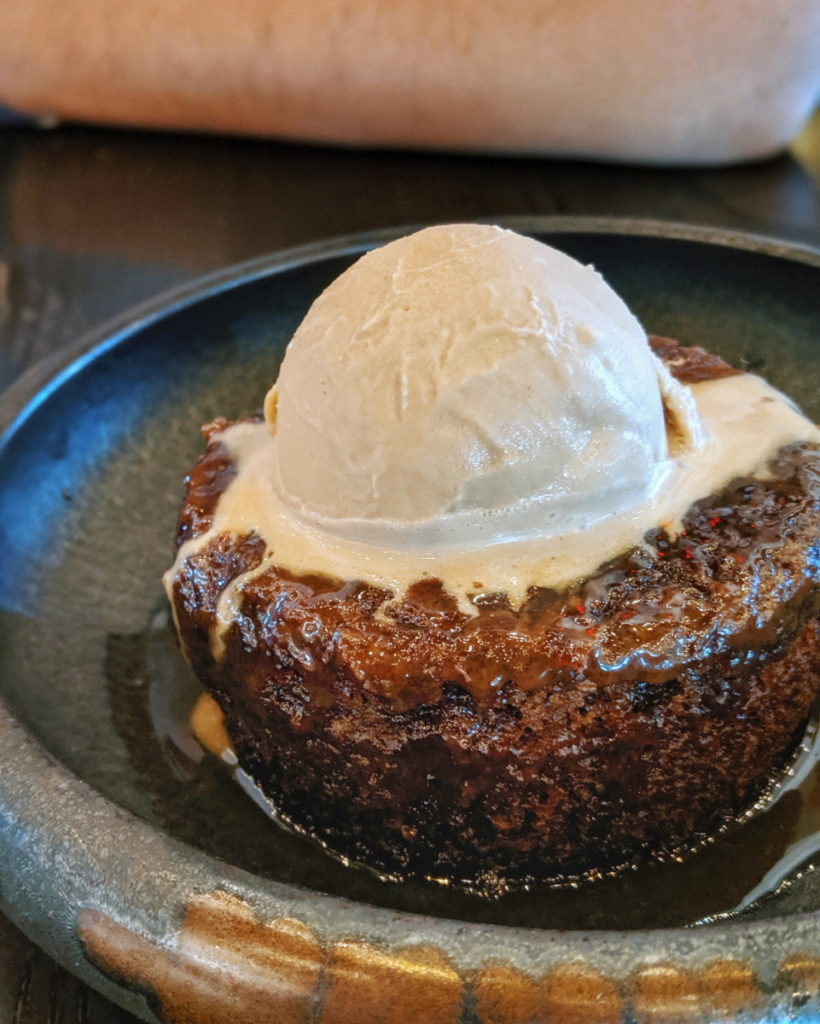 THIS though… the Sticky Toffee Pudding ($13.95 USD)…. is a MUST GET ITEM. Even if you’re not a fan of toffee or bread pudding, I think this will change your mind. I’ll be the first to say that I don’t have a sweet tooth, nor do I like really sweet desserts (which this totally looks like it is). However, this was one of the best desserts I’ve ever had. Unreal. Just get it.

At the end of the day, Hell’s Kitchen is definitely not to be missed if you’re a fan of Chef Gordon Ramsay or the show Hell’s Kitchen. We came here to celebrate my birthday so the almost $200 CAD bill was easier to swallow. But otherwise, it’s truly really expensive to dine here so don’t come unless you’re prepared. 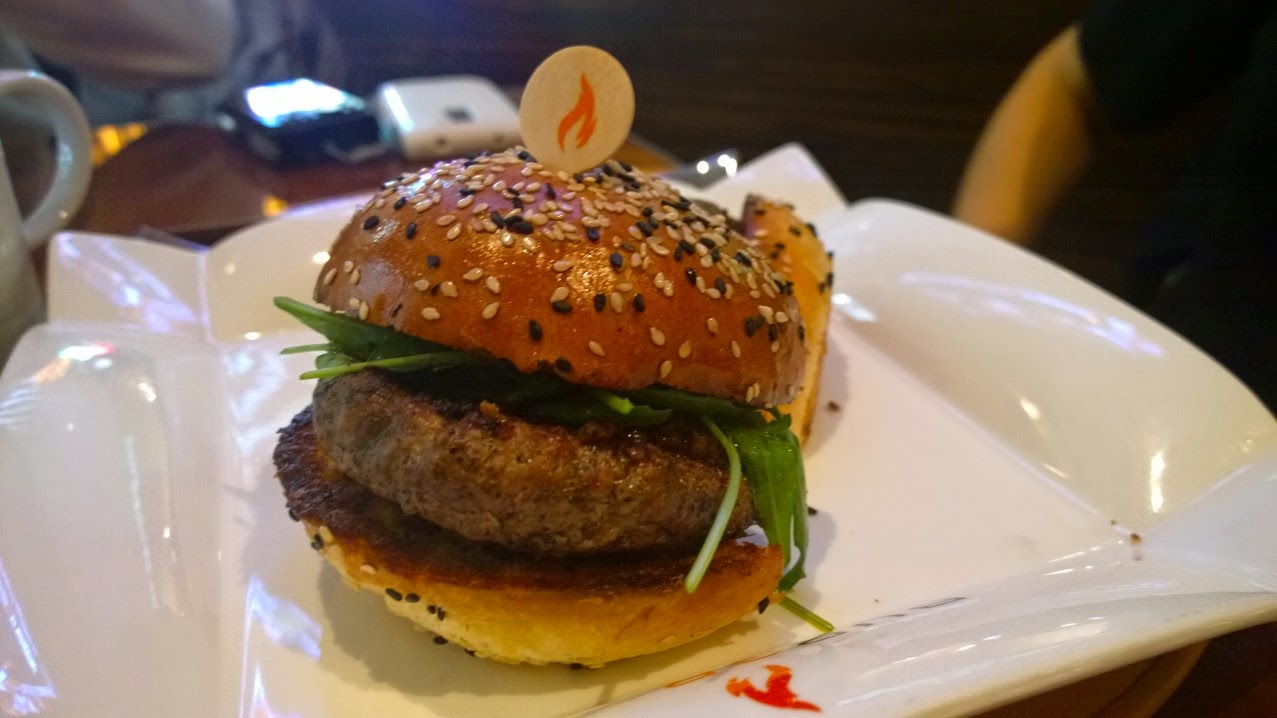 What To Expect When Traveling with Korean Air