Skip to content
Brunch Rating: 2/5 Tapas
June 19, 2013January 16, 2016 admin 0 Comments
I’ve heard great things about the Rogue Kitchen + Wetbar located in Waterfront station so when Tsa suggested the Broadway location for dinner, I was quite excited. 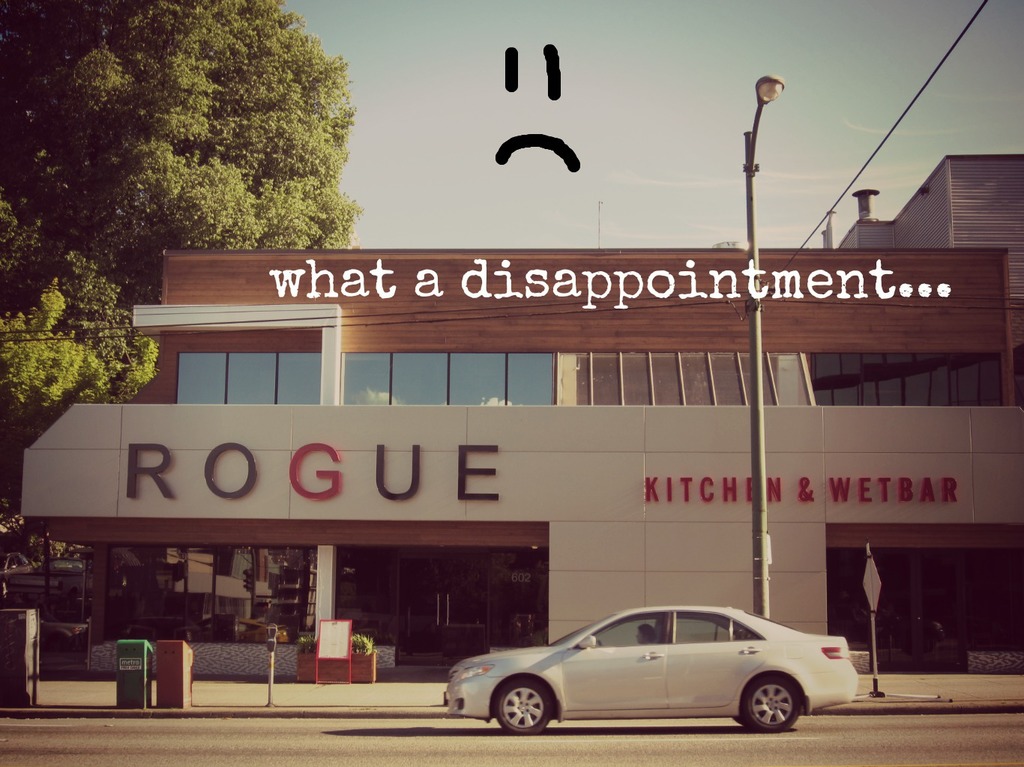 I came with a large group of 9 during prime dinner time but we noticed that half the restaurant was empty. 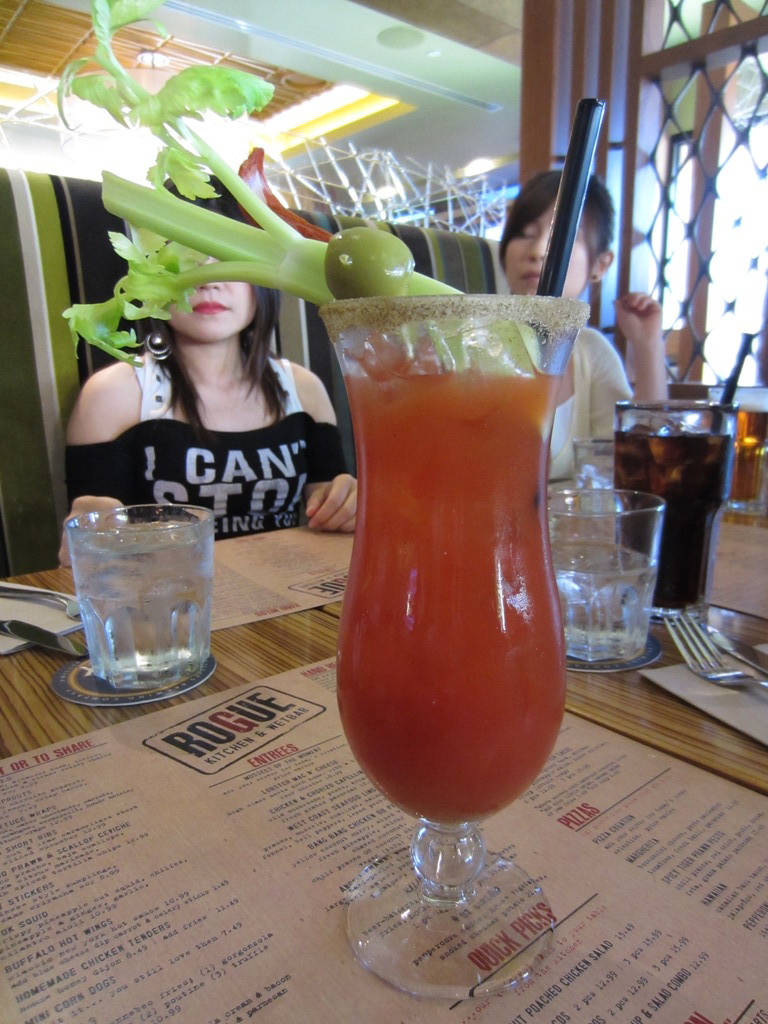 Their Signature Cilantro Caesar ($7.49) was a big hit at our table. It comes with an olive, celery, and a pepperoni stick. 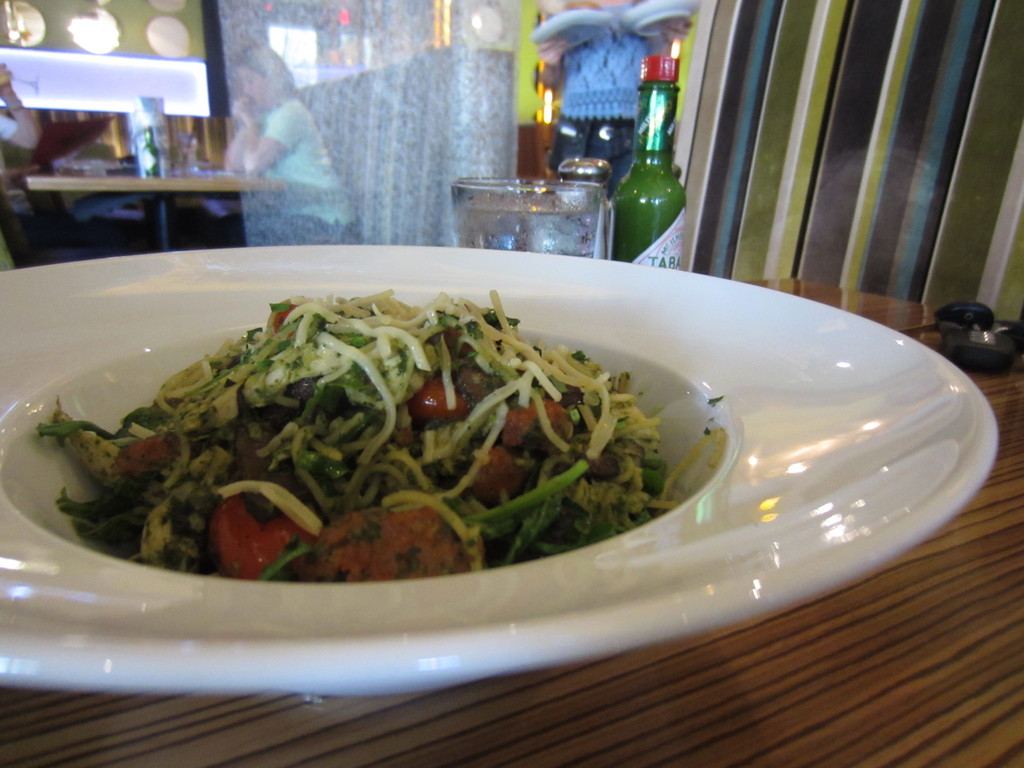 Vicks was not a big fan of the Chicken & Chorizo Capellini ($16.99). She said it tasted really bland and underwhelming even though the description of it (wild mushrooms, pesto, arugula, fresh grated Parmesan) sounded fantastic. 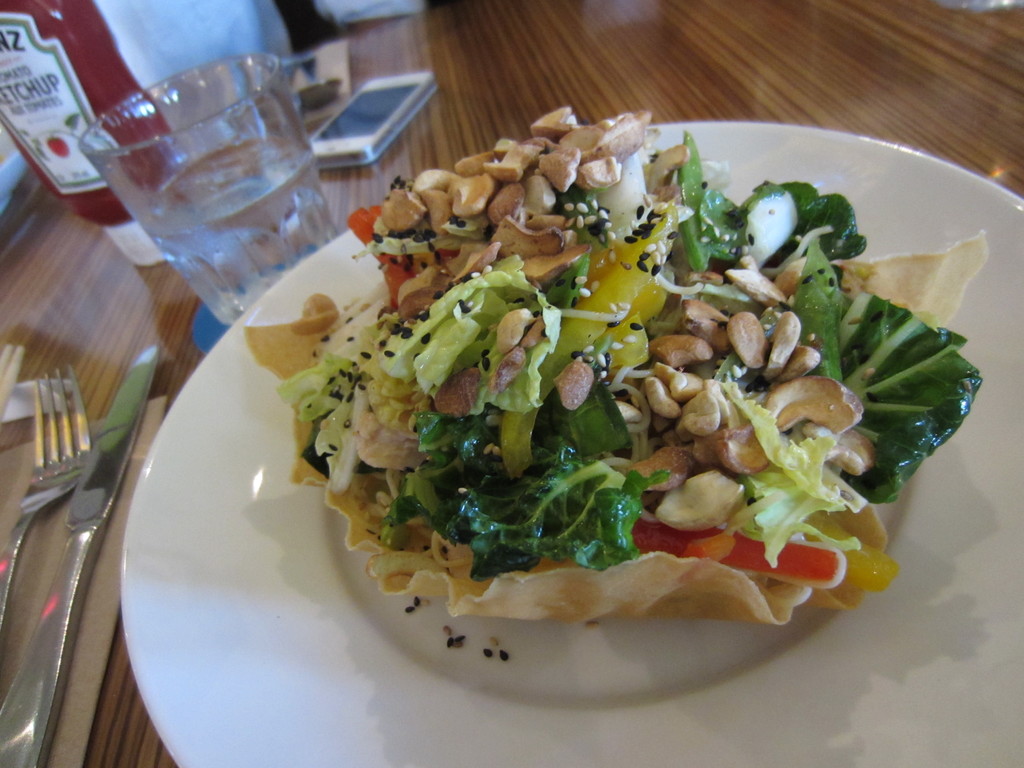 I went for the Coconut Poached Chicken Salad ($15.49) and although it had an array of beautiful colours, the flavours failed the shine through. The chicken had no coconut taste and was oddly dry for having been poached in coconut milk. The snap peas, yellow and red peppers, and mixed greens were all so-so but tasted out of sync with each other and had no binding flavours. 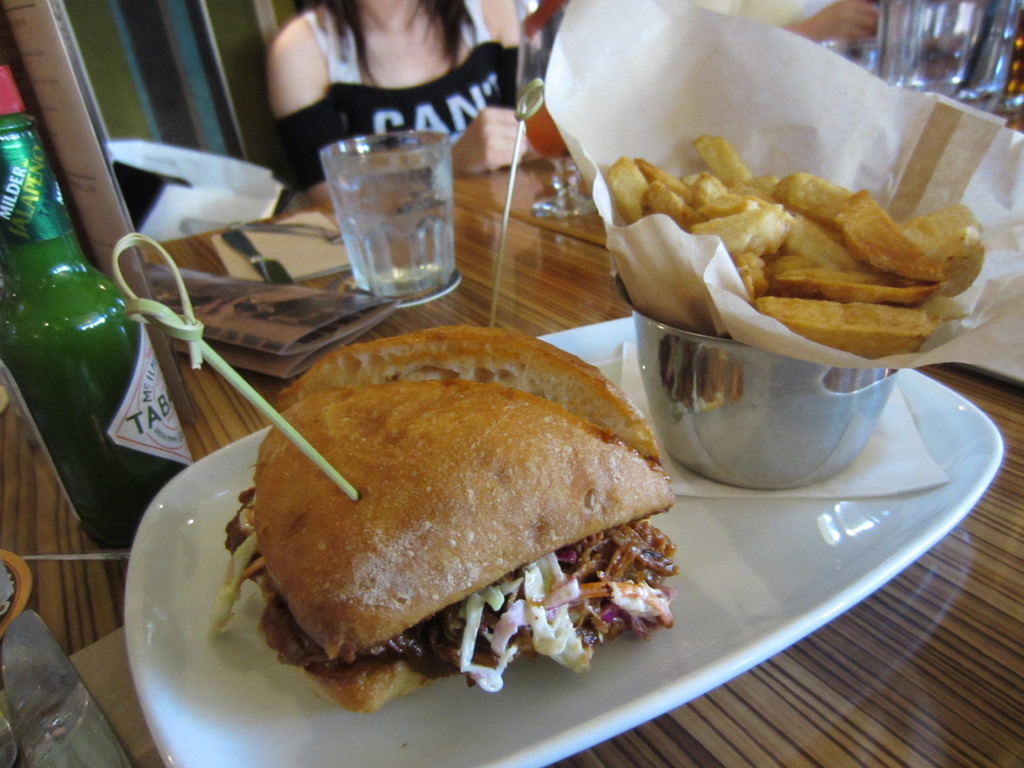 The only entree that actually wowed us was the Pulled Pork Sandwich ($14.49). Meta Knight ordered it and could not stop eating it. The braised pork shoulder was melt in your mouth and the housemade bourbon stout bbq sauce was amazing. 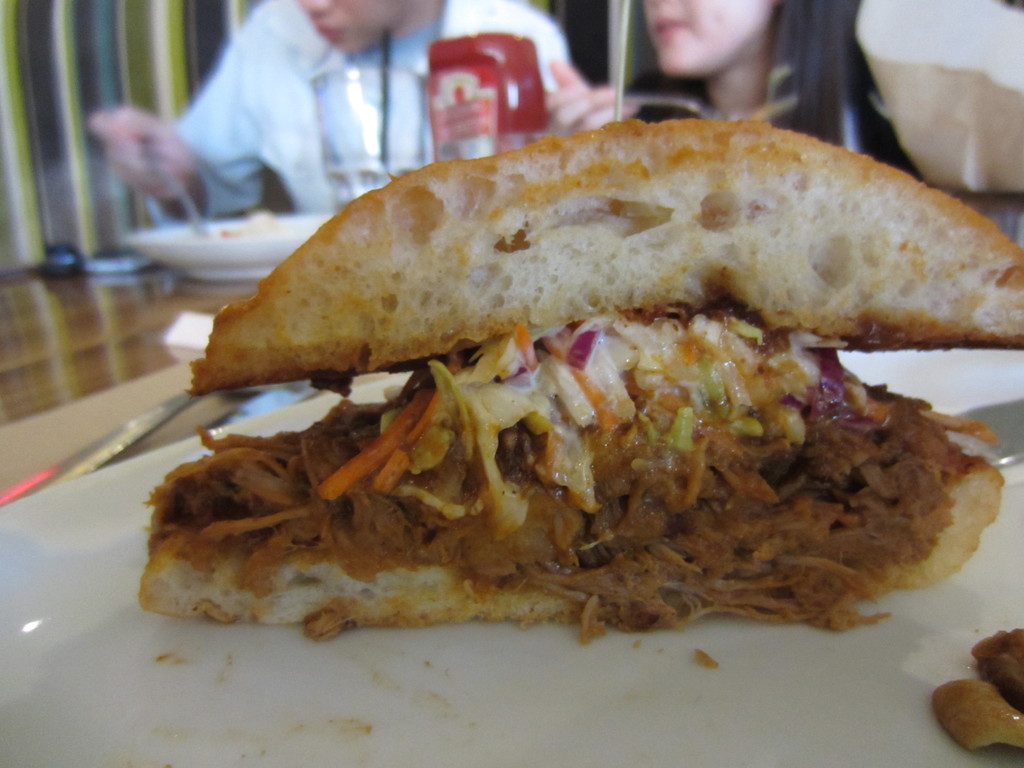 I was lucky enough to get a taste (I had to pry this off Meta Knight, no joke) and boy was it delicious. If I ever go to Rogue again, this will probably be the only item I’ll order. 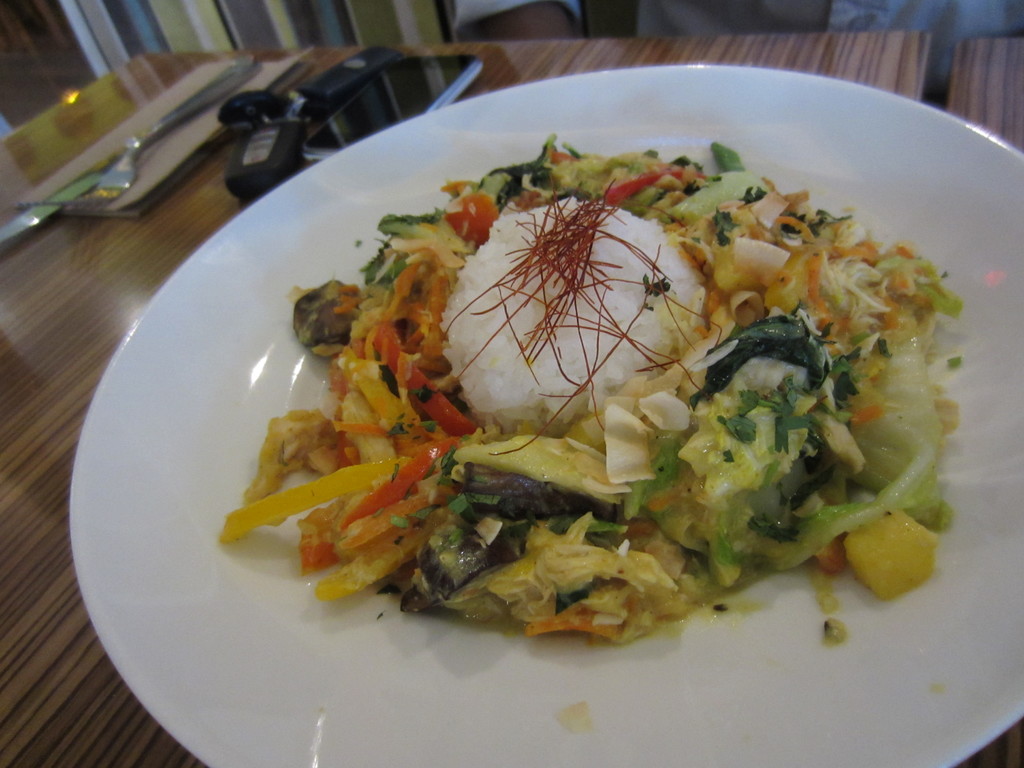 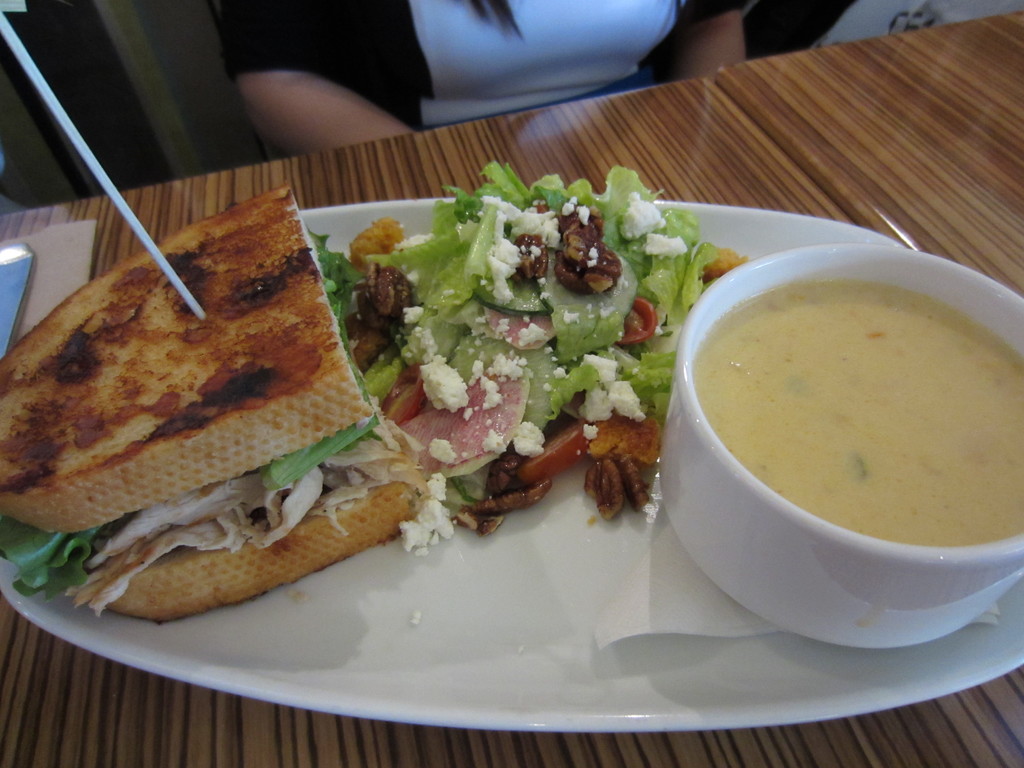 Tsa enjoyed the Turkey Sandwich, Tom Kah Soup & Salad Combo ($12.99). This seems like a good combo to get for lunch.

Okay, now about the service. One thing I found strange was that none of the servers were wearing uniforms so it was really hard to see who worked there. As well, our waitress gave us one of the worst service I’ve had in a while. She had a very nonchalant attitude while talking to us, didn’t check up on us at all during our meal, walked away from us when we were trying to wave her down for more water or because something was wrong with our order, and also overcharged us in the end. None of us are very picky with service (comon’… we get much worse in Asian restaurants), but all of us left the restaurant disappointed and shaking our heads. I felt frustrated having to pay the 18% service charge for that type of service. 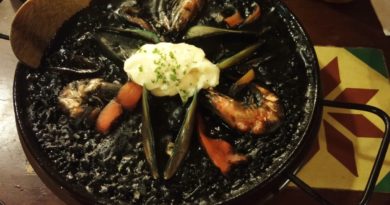 Patisserie Lebeau- For The Love Of Belgian Waffles