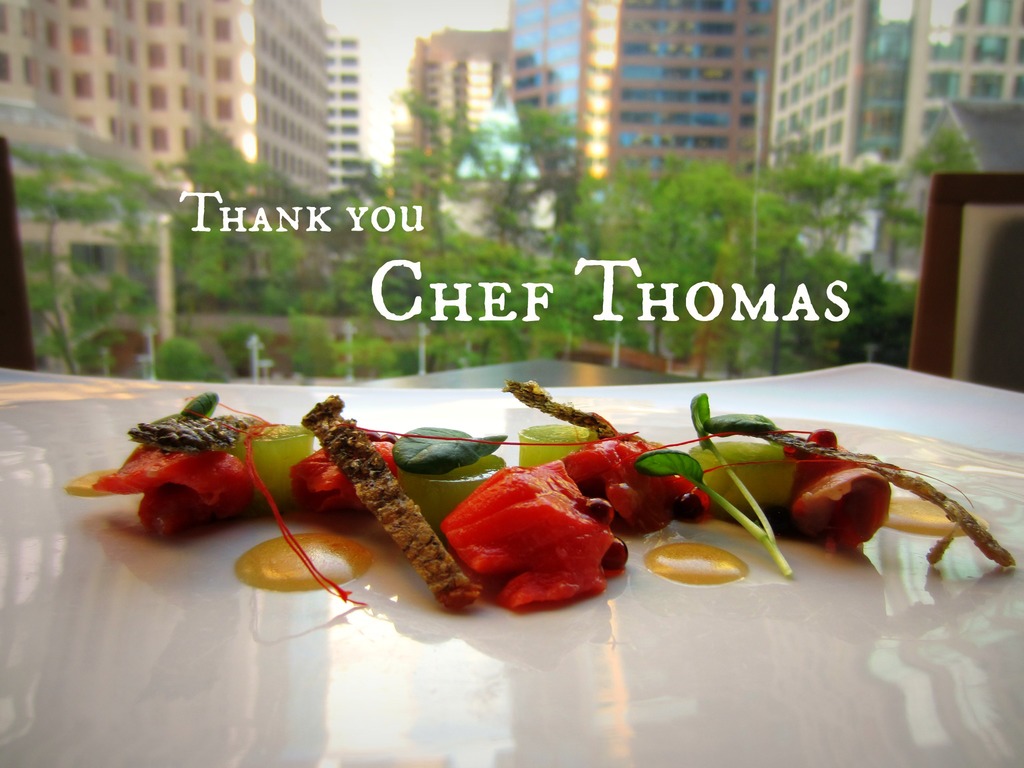 Downtown Events Media Event Rating: 4.5/5
June 8, 2013March 8, 2016 admin 0 Comments
For our 4 year anniversary, I surprised Meta Knight by going to Mosaic Bar & Grille at the Hyatt Hotel. With my Vaneats package in hand, I was incredibly excited since I saw how beautiful the courses were from other food blogger’s experience. Just a heads up, this post is compilation of two visits at Mosaic within a span of a week.

Executive Chef Thomas Heinrich is the culinary genius behind Mosaic Bar & Grille located on the second floor and Grain Tasting Bar on the first floor of Hyatt hotel. 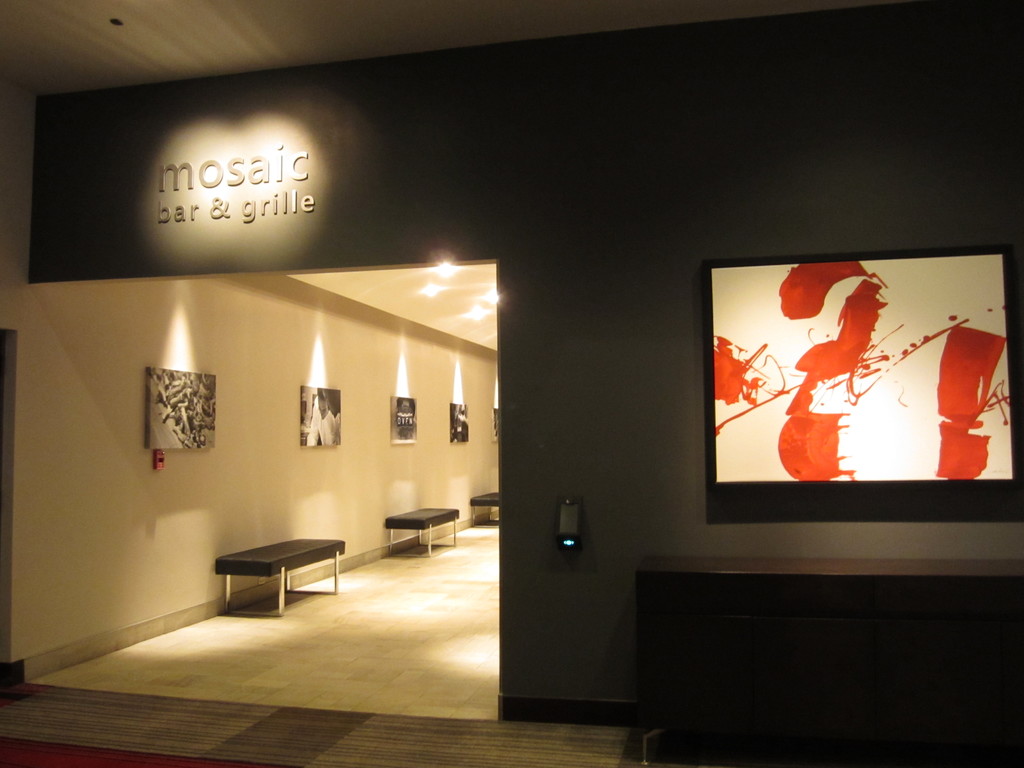 I’ve heard such amazing praise regarding Chef Thomas’ dishes and how they always look like a work of art. Heck, the Vaneats package is called “Art of Taste”!
[1st Visit]

The complimentary Smoked Salt Biscuits were so incredibly soft and buttery. Even with my willpower, I devoured them pretty quickly.

After much deliberation, Meta Knight enjoyed the Caesar ($8) while I chose the Kits Cooler ($8). His was made with absolut vodka, clamato juice, worcestershire sauce, and tabasco sauce. 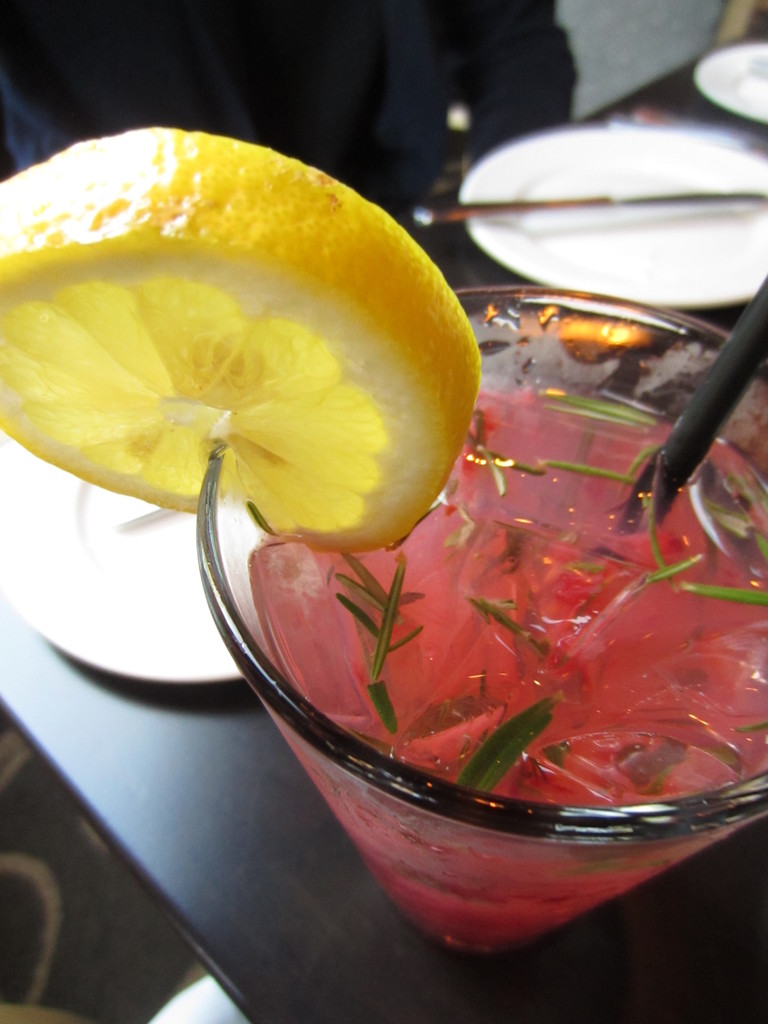 I absolutely loved the fresh rosemary in my drink since it gave the raspberry taste an earthy robust flavour. I might have to start putting rosemary in all of my fruit drinks from now on. 😛

So having read a billion reviews on the vaneats package and seeing all the amazing pictures, this Warm a la Minute Smoked Skuna Bay Salmon was by far my most anticipated dish of the night. When it arrived, I was quite taken back because it didn’t resemble anything like the pictures. The components were there – salmon, avocado terrine, and maple bourbon vinegar. But it looked so poorly executed. I didn’t want to be a nagging customer just because the presentation looked off so we didn’t tell our server. After I got home, I posted a picture on Instagram of this dish and mentioned how disappointed I was. My fellow foodie friend Sean from Sean’s Adventures in Flavour Town and Chef Thomas Heinrich reached out to me via twitter and Chef Thomas asked us to come back again to show us what the salmon dish SHOULD have looked like. He apologized and said that dish should not have gone out. Thus, that is why this post is a compilation of two visits. 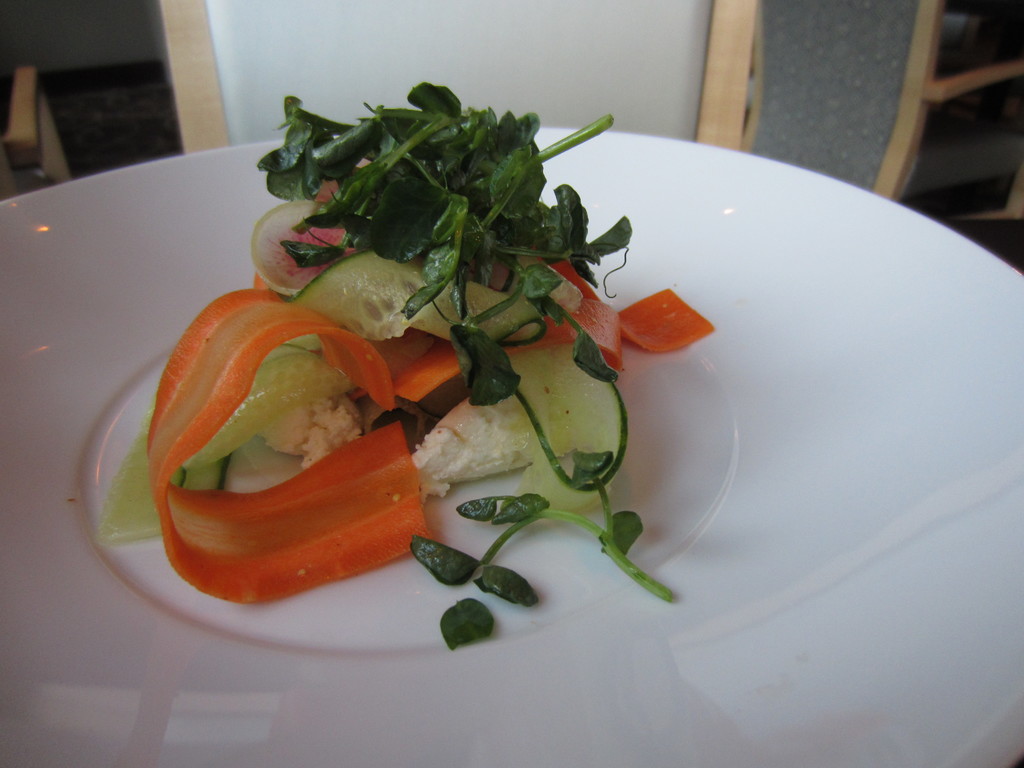 This is the other appetizer offered with the package called Local Season Spring Salad. I also thought this was not as nicely executed as it should have been. 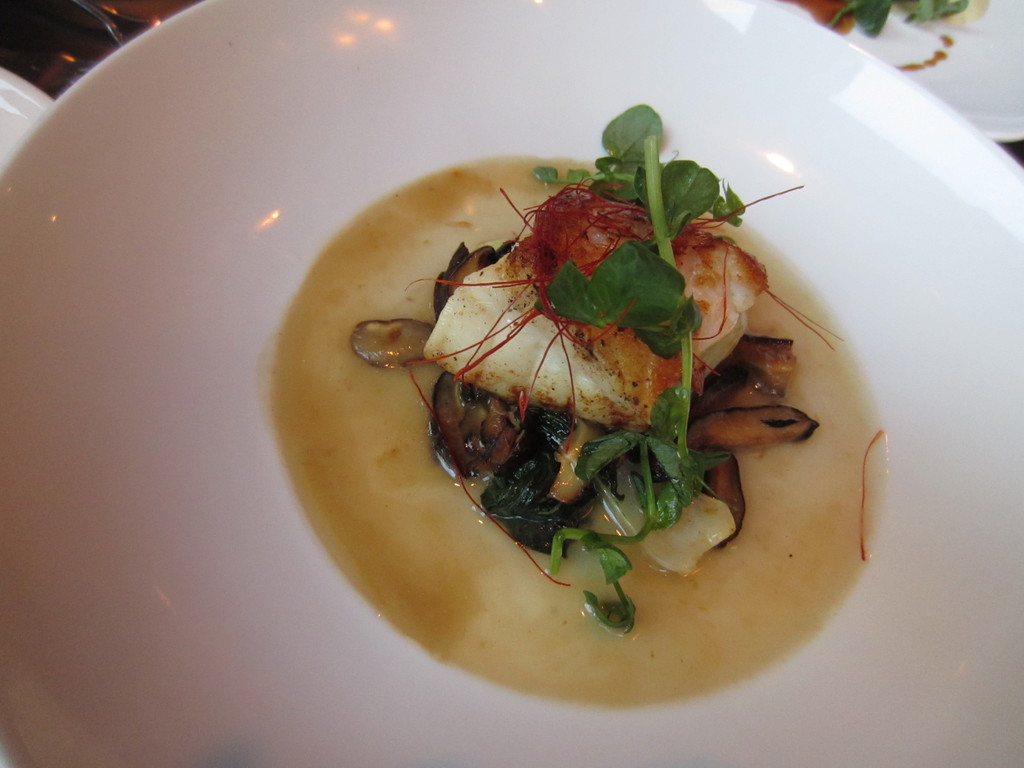 I chose the Grilled Long Line Caught BC Ling Cod with baby bok chow, shiitake mushroom, and a dashi broth on the side. 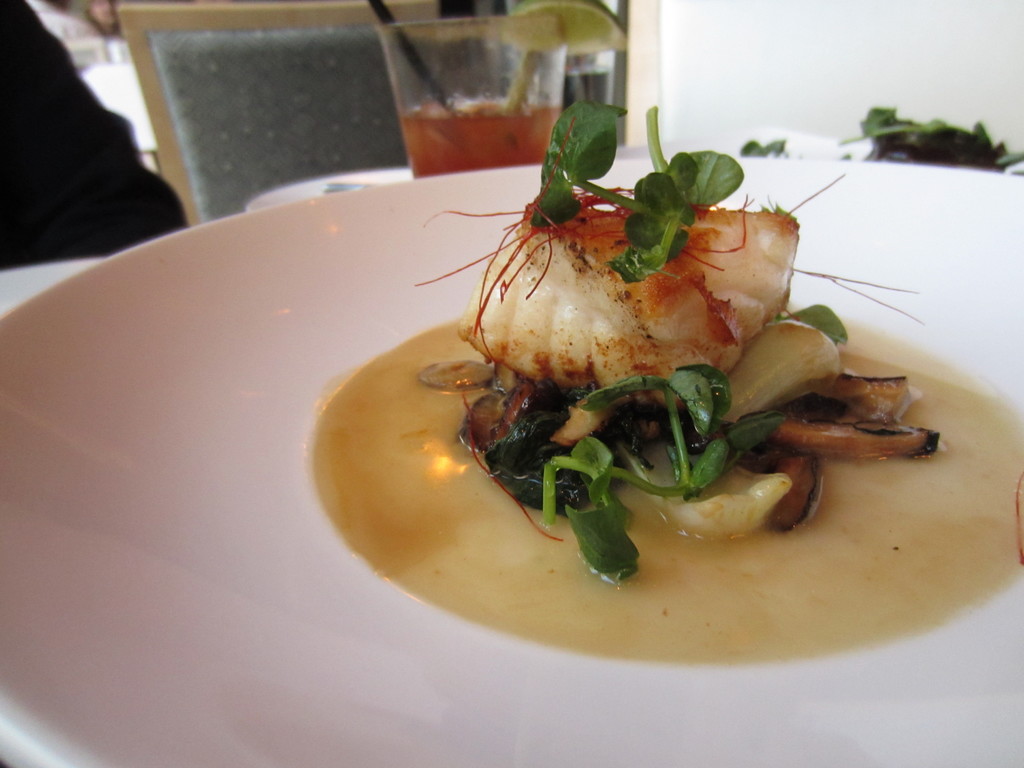 The ling cod was tender and very flaky. I really enjoyed the light dashi broth and almost wish I asked for a spoon to drink it like soup. 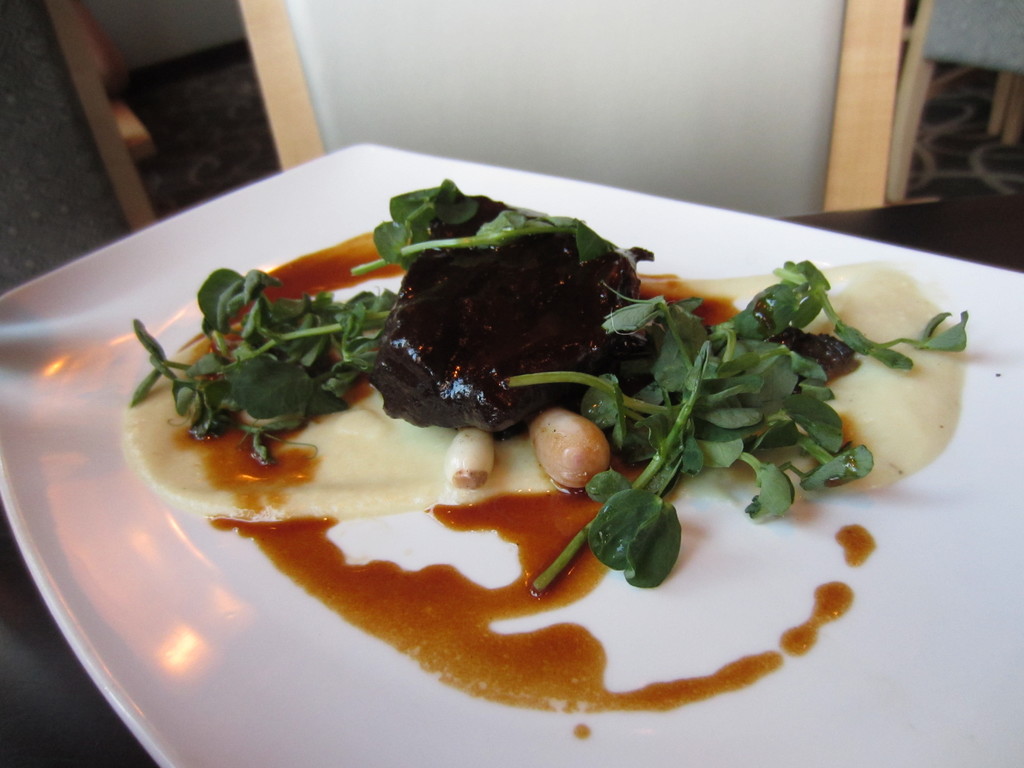 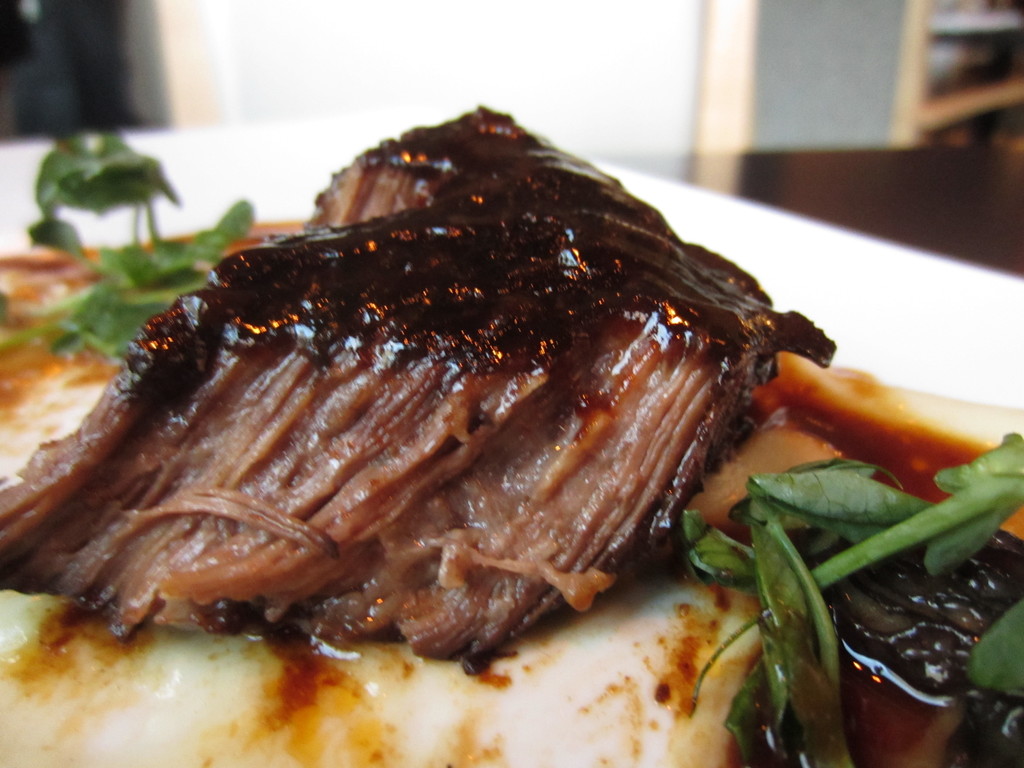 A picture is worth a thousand words so I don’t even think I have to explain how incredibly soft and moist the meat was. It literally melted in my mouth with ease. 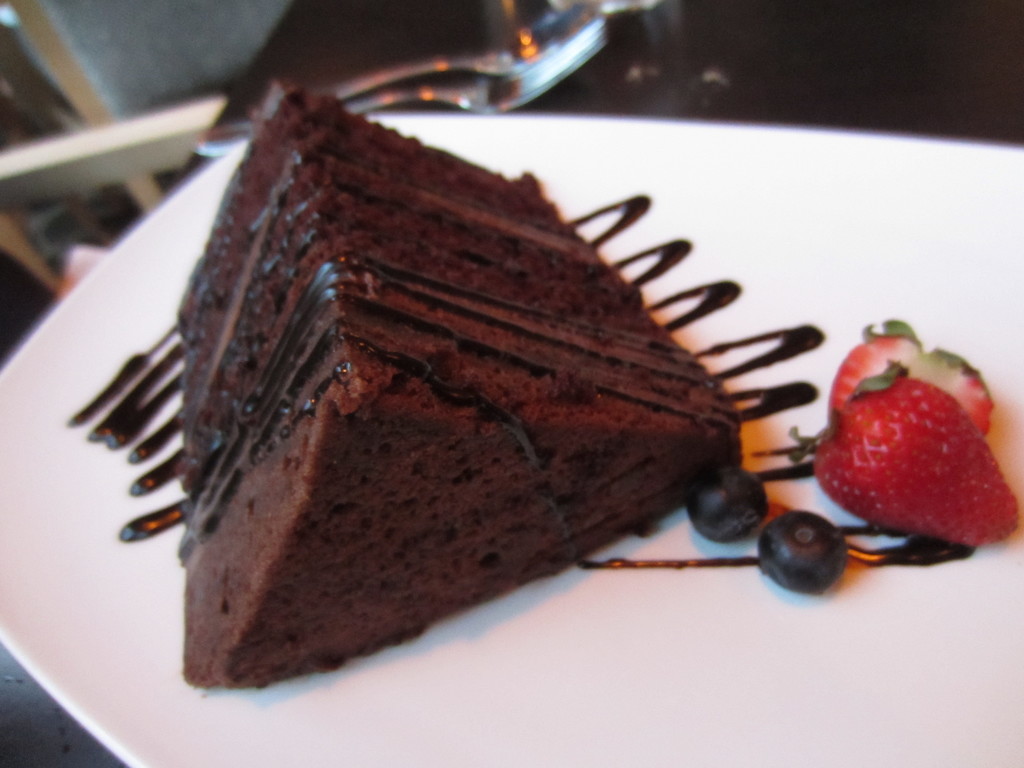 By this point, we were both bursting at the seams so we packed almost all of the Triple Layer Mosaic Chocolate Cake. Kirbro had a taste of the cake when I got home and said the fudge was incredibly velvety and smooth. 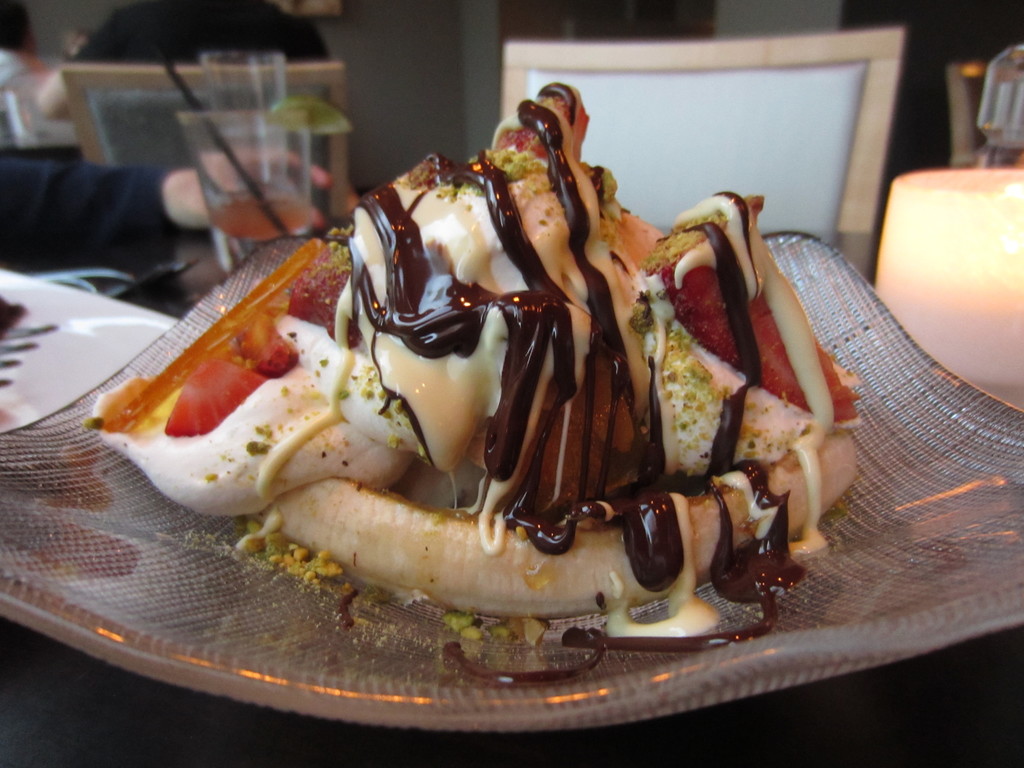 If you don’t come for anything else, come for their Banana Split. With caramelized bananas, vanilla ice-cream, almond brittle, fresh berries, and chocolate sauce, and pistachio dust on top, its anything but your childhood banana split. 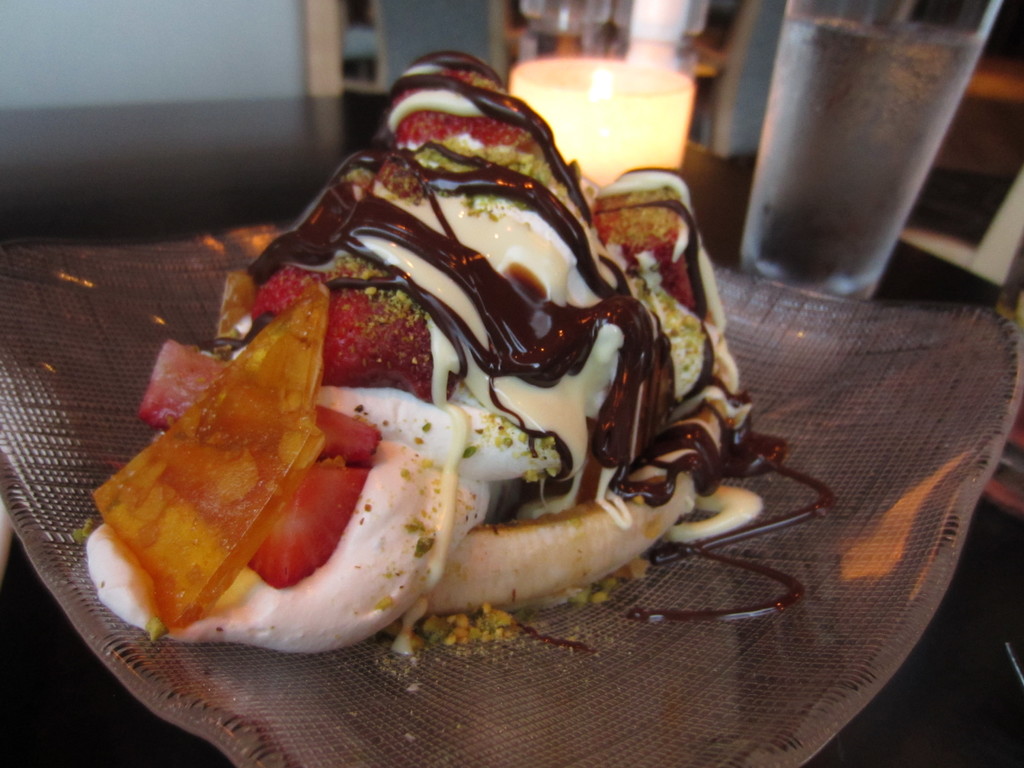 This adult version of a banana split evaporated within moments of it landing our table. We felt like kids again eating this.
[2nd Visit]
As mentioned, to make up for the poorly executed salmon appetizer, Chef Thomas invited us back again for dinner in the same week. I just want to mention that the service at Mosaic is top notch. Our server and hostess were amazing both times (they even remembered us!). 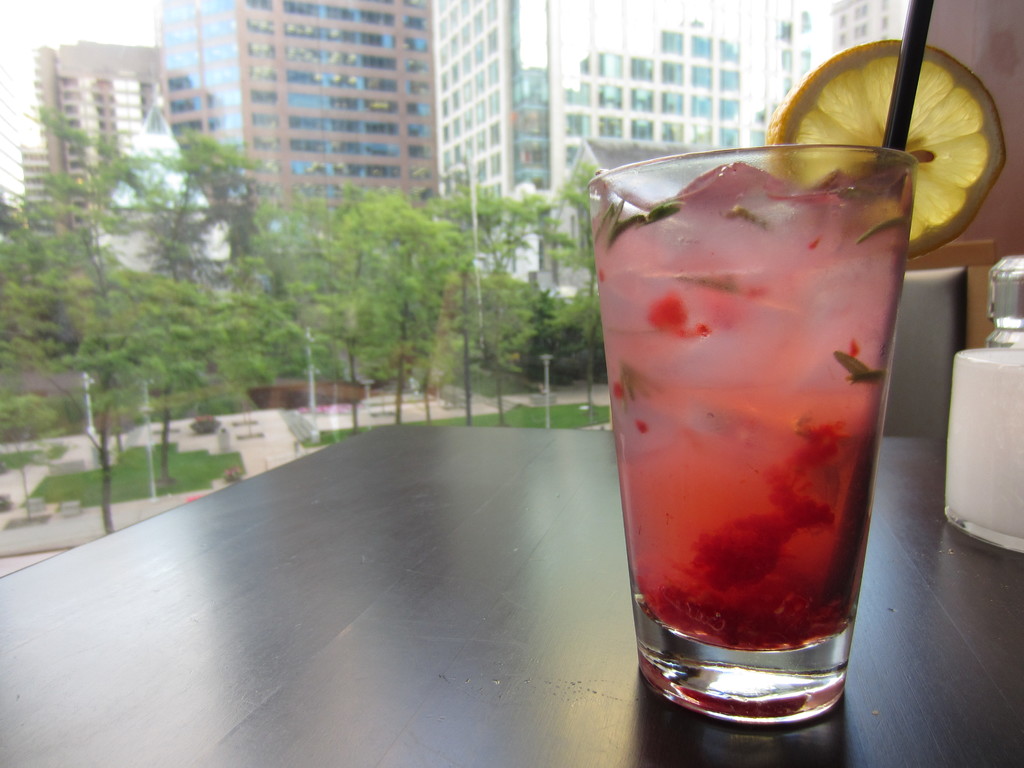 We had no idea what to expect since we were not given a menu. I loved the Kits Cooler so much last time, I just had to order it again. It was just as delicious as last time. 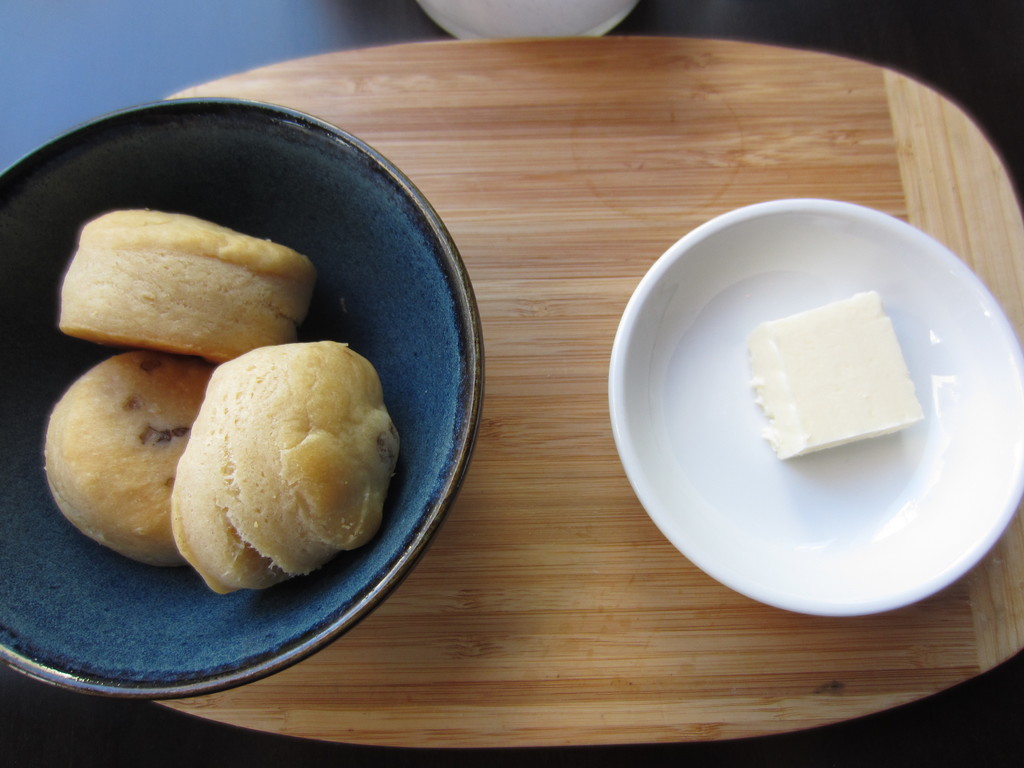 Smoked Salt Biscuits again but this time, Meta Knight thought they were even fluffier than last time. Thumbs up. 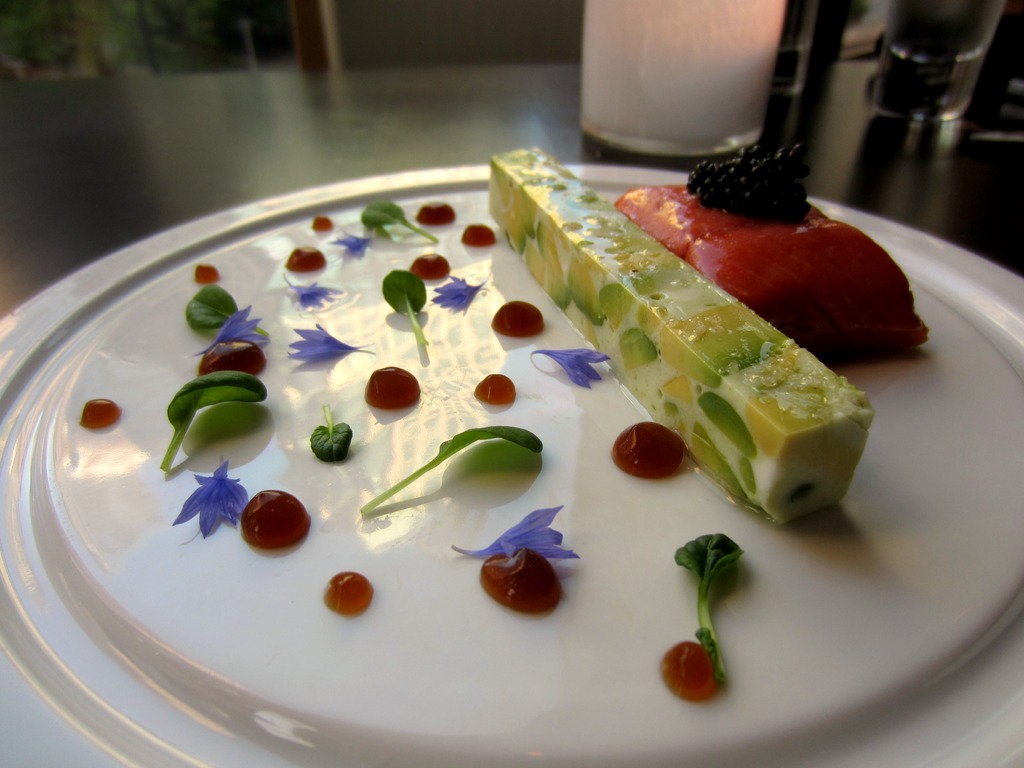 Now this ladies and gentlemen, is what the salmon dish is suppose to look like. It is truly a work of art and is the first time I really got to experience a dish that was meant to be consumed visually as well as through the palate.

We couldn’t stop staring at this dish and feeling flabbergasted by the difference from last time. 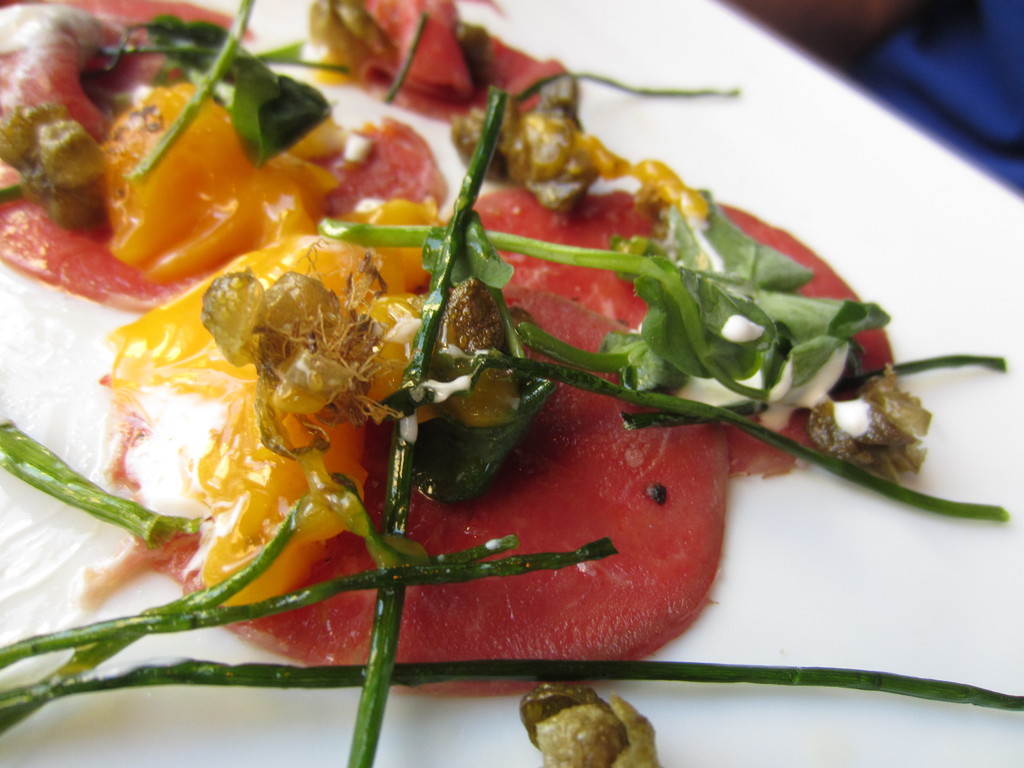 I loved how each ingredient had a purpose and either added a textural or flavourful component to the dish. The crispy capers and chives added crunch while the egg yolk lava caressed the tender meat. We both though the egg yolk resembled the soft yolky egg you get at ramen restaurants.  I highly recommend this.

Next up was Salmon Sashimi with cucumber gelee, citrus dressing, fish roe, saffron, and crispy fish skin. When I was eating this, I felt like I was a judge on Iron Chef America having the luxury of eating food prepared using molecular gastronomy. 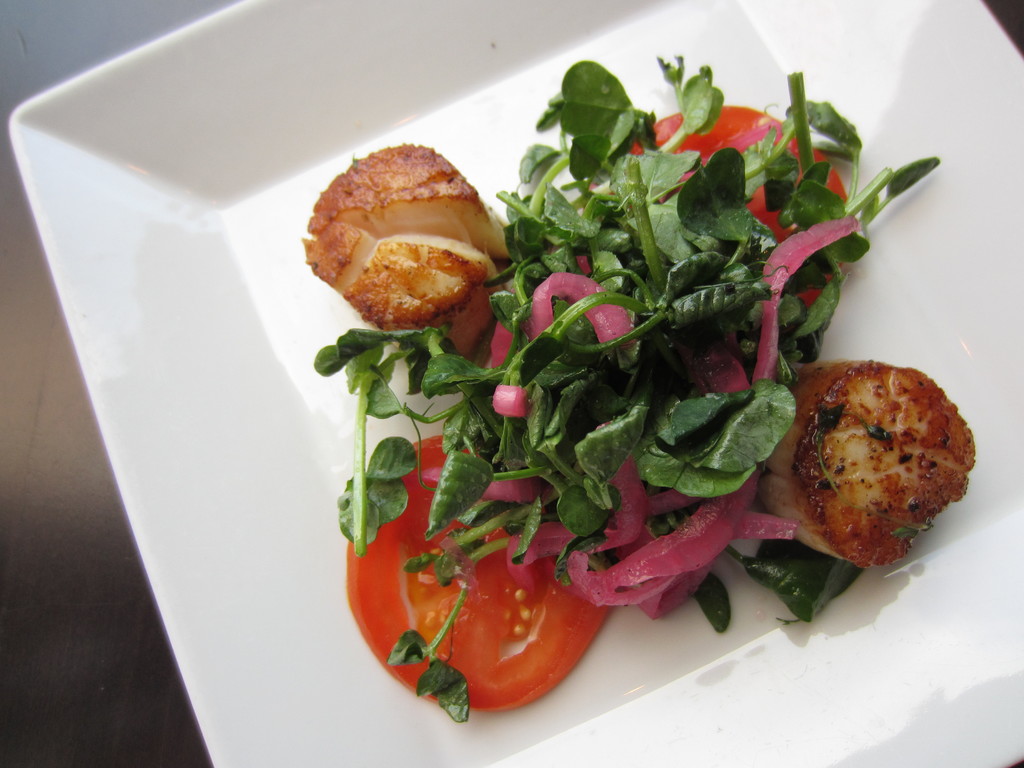 Our waitress raved about this Seared Scallop Salad dish and said it was her favourite. Indeed it was very delicious. We finally know what successfully seared scallops taste like after having unsuccessfully tried searing them at home. 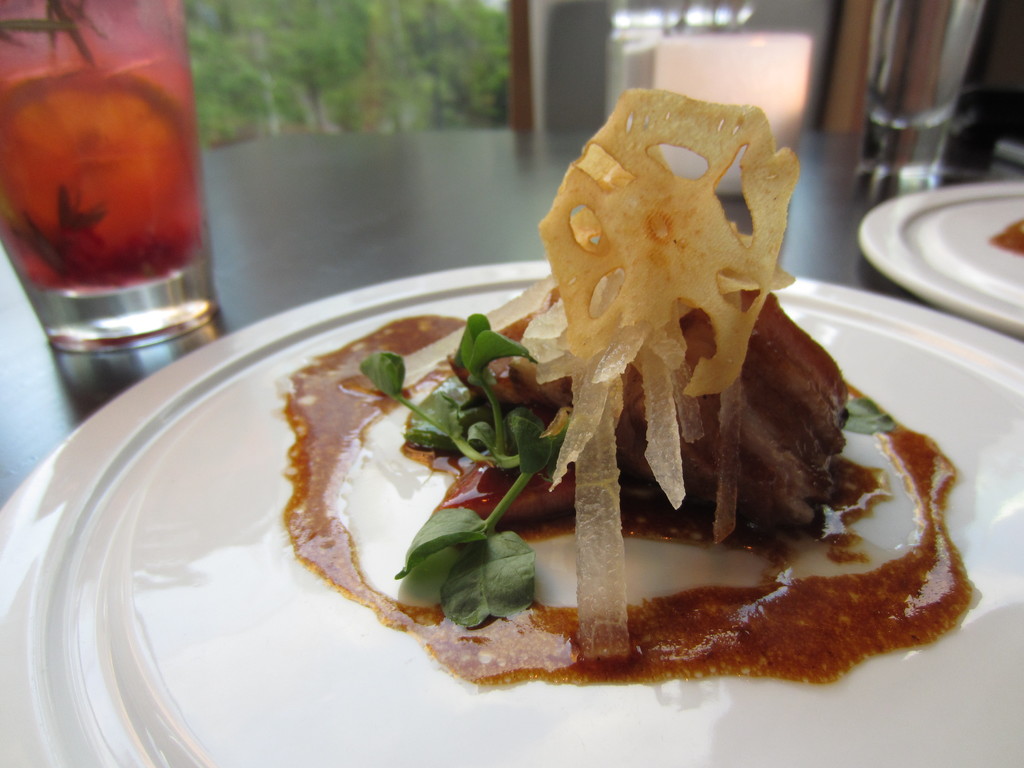 For our first of two entrees, we had the Grilled Galbi Marinated Pork Jowl with radish, snow peas, crispy lotus root, and asian pear. The fatty jowl reminded me of pork belly and while I very much enjoyed the dish, it got a little too fatty for me so I just set some of it aside. 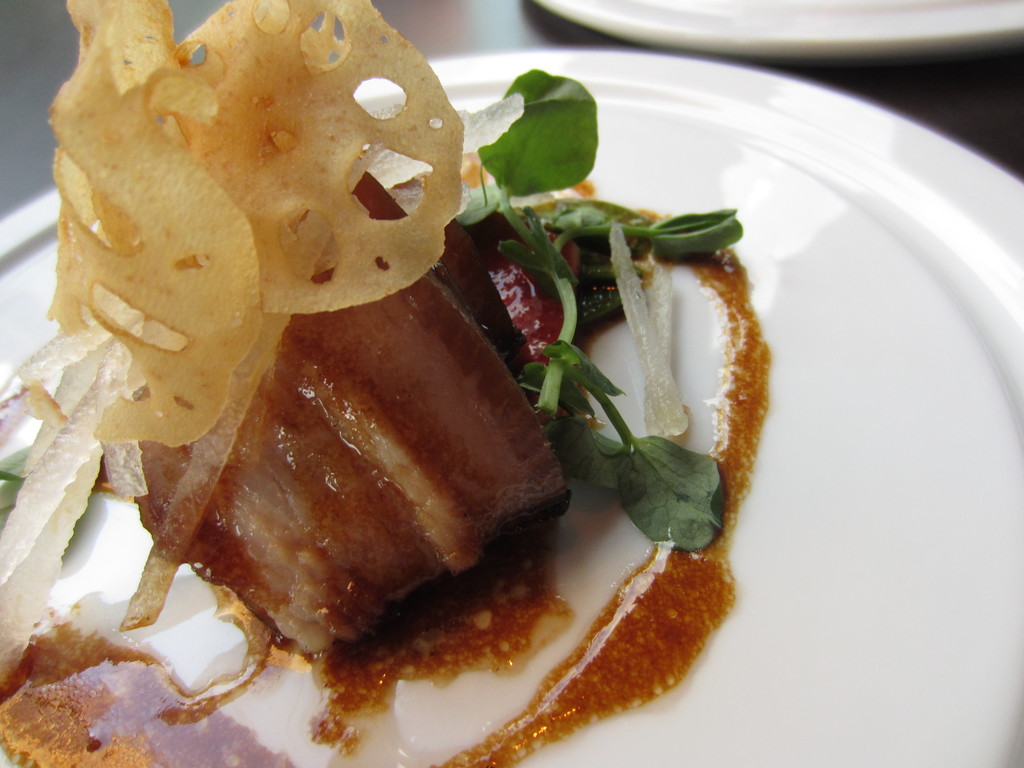 The lotus root chips as I’d like to call them were sliced oh so thinly and gave a spectacular crunch. I ate them like chips before I even started my meal. 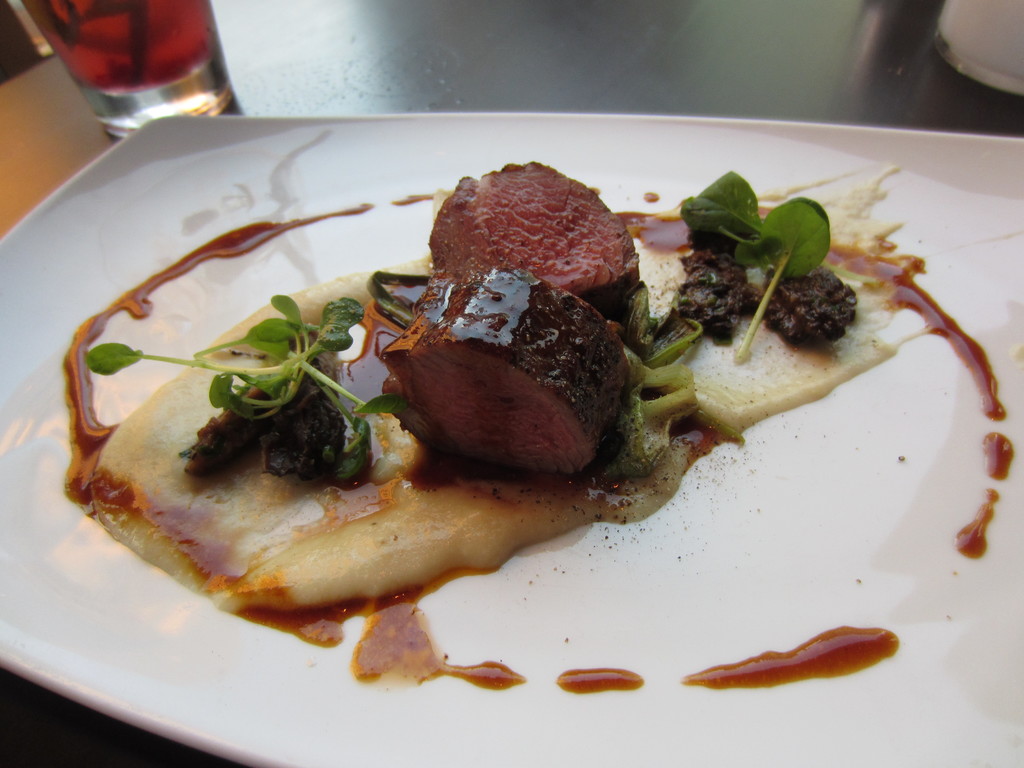 These Lamb Medallions were served with the same root vegetable puree from before, morel mushrooms, and deep fried spring onions. 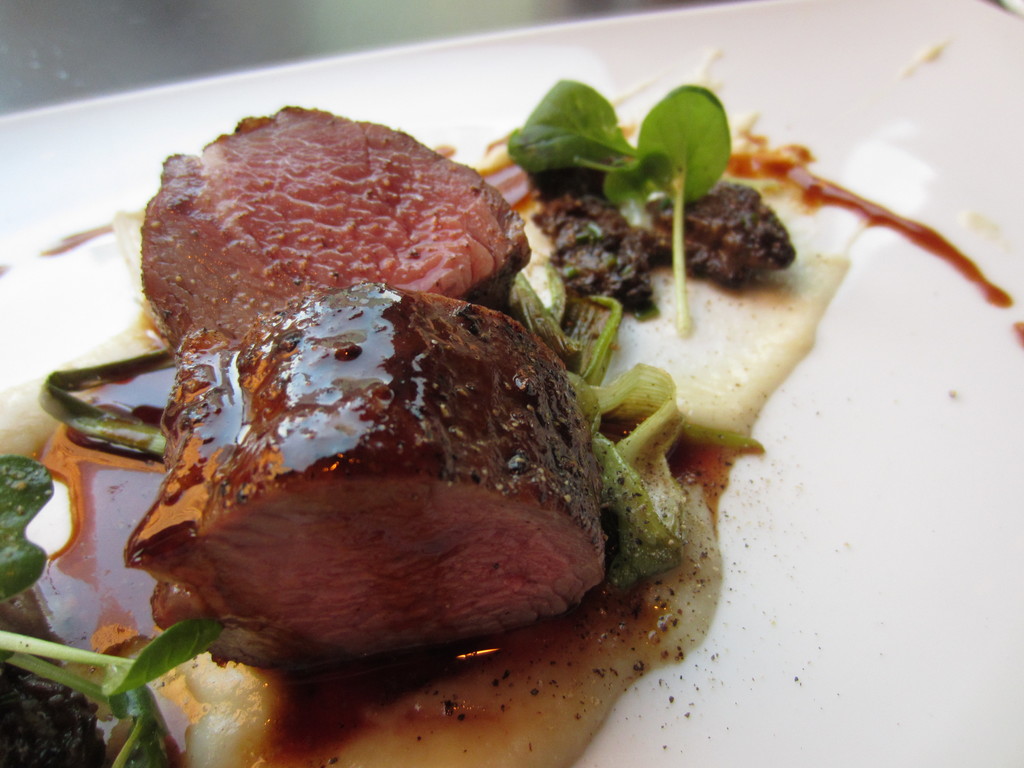 It was cooked perfectly medium rare and extremely tender. We couldn’t stop saying ‘oh my god… this is SO good…’ the entire time we were eating. I actually tried eating the green onion too but I think they were more for garnish than anything because I had to gnaw on it pretty hard. Not attractive on my part.

Last but not least is the Green Tea Panna Cotta with ginger streusel, and seaweed sesame chocolate. I didn’t expect the strong concentrated matcha flavour because i find that most times, restaurants use very little because they are afraid it will overwhelm their customers. However, this was awesome and right up my alley in the green tea department.

All in all, though our experience the first time around was subpar due to the appetizers (and ONLY because of the appys, everything else was great), it was quickly rectified by the fast response and generosity of Chef Thomas. He treated us like we were in his own kitchen, whipping up whatever he thought we would enjoy the most. Thank you again Chef for your hospitality and for making our 4 year anniversary experience complete.