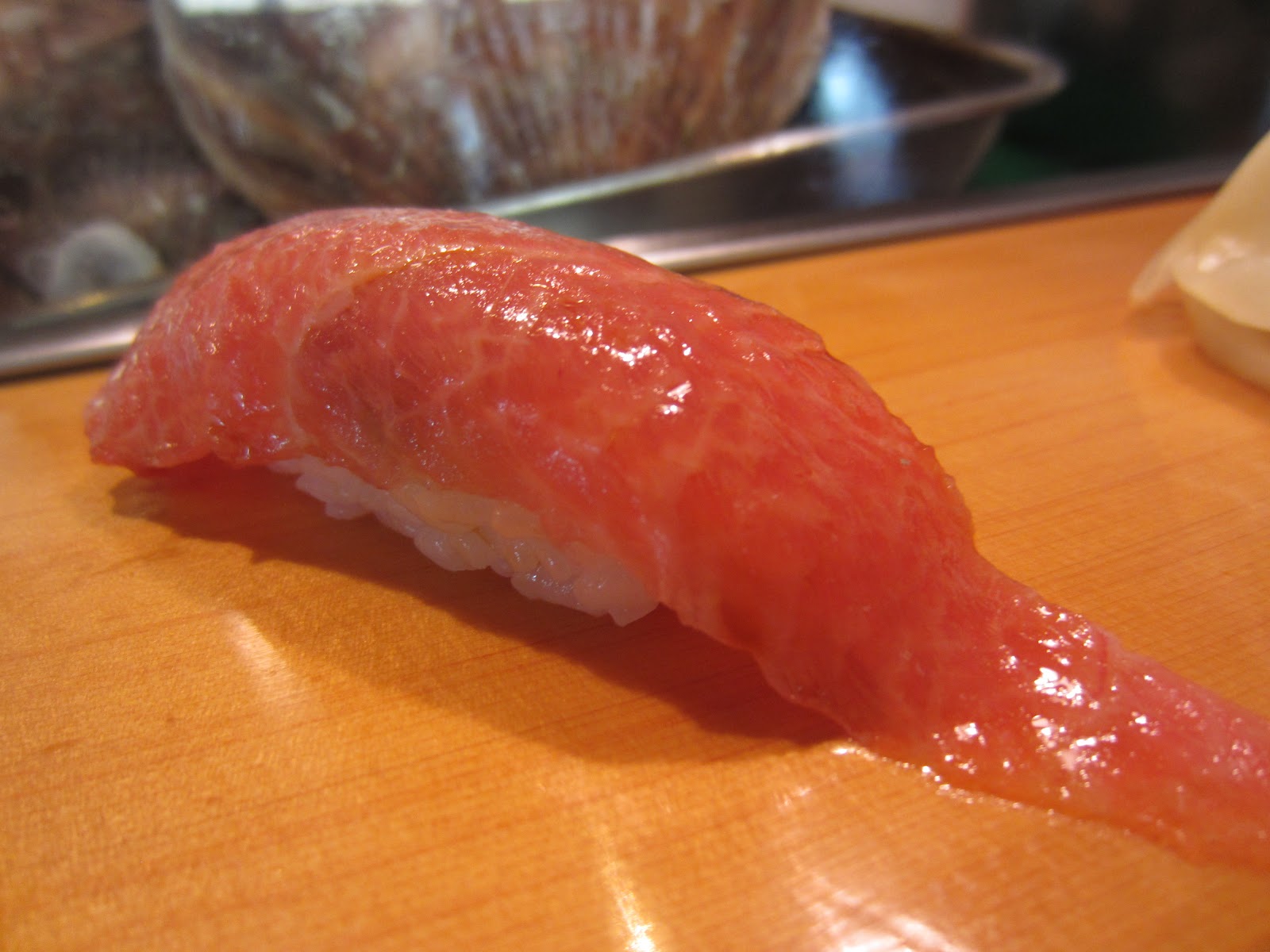 Okay, here’s the deal. I have found the must-go-to place if you ever plan to visit Tokyo, Japan. This is where I had the best sushi I’ve ever tasted and I’m super excited to tell everyone I know about it. However, if you don’t enjoy raw seafood, I wouldn’t recommend this place because that is pretty much all they serve. 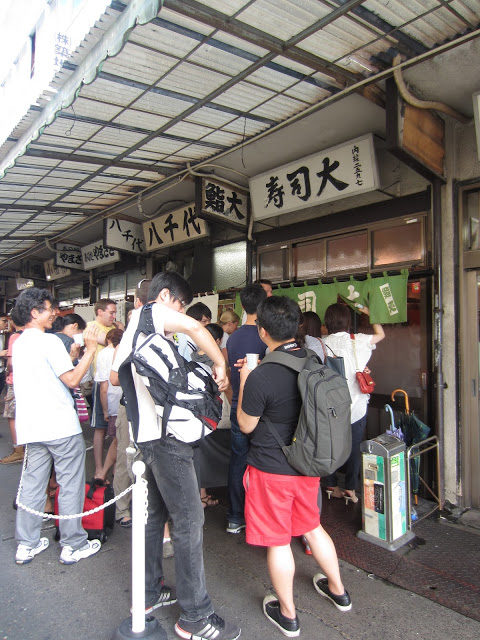 I went to Tokyo for 4 days with Trixie and we were on the lookout for the best sushi in town. We heard about this location called “Tsukiji Fish Market” that’s known for serving up the freshest seafood in Tokyo. The restaurant we  specifically went to within the fish market was called “Sushi Dai”. Here is the lineup in front of the restaurant. 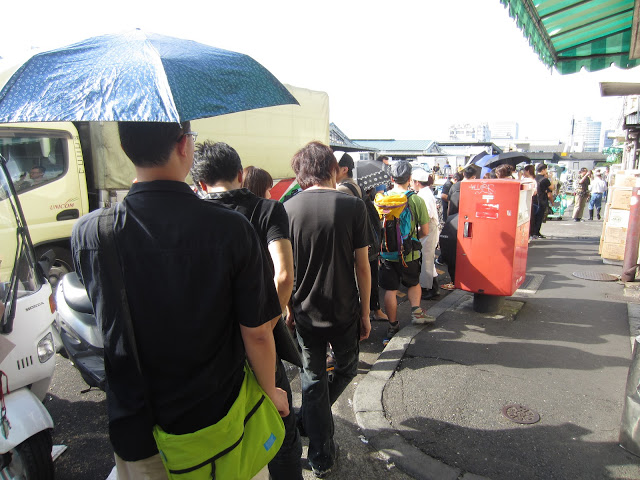 And here is the second part of the lineup. The restaurant only seats around 14 people so the wait will be long. VERY LONG. How long? Well, Trixie and I waited 2 hrs and 50 mins. O.O We got there at 8am and sat down close to 11am. That might sound ridiculous, and it is! But at the end, it was all worth it. 😀 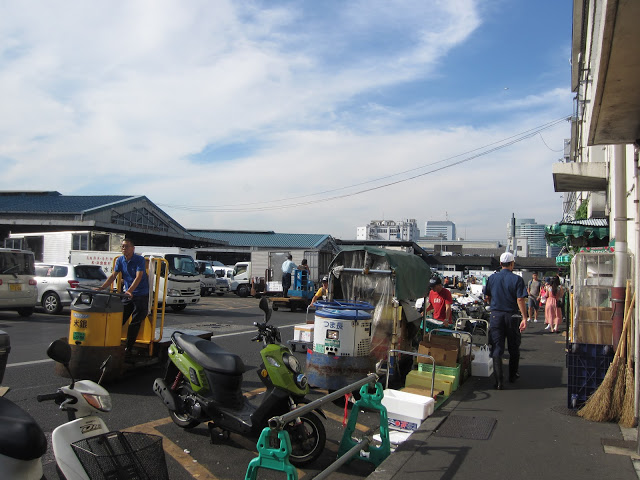 Here is the view of the fish market when you’re waiting in line. It’s actually not a tourist attraction but more of a wholesale fish and seafood market. Many people do business here so as a tourist, you have to make sure not to get in the way. 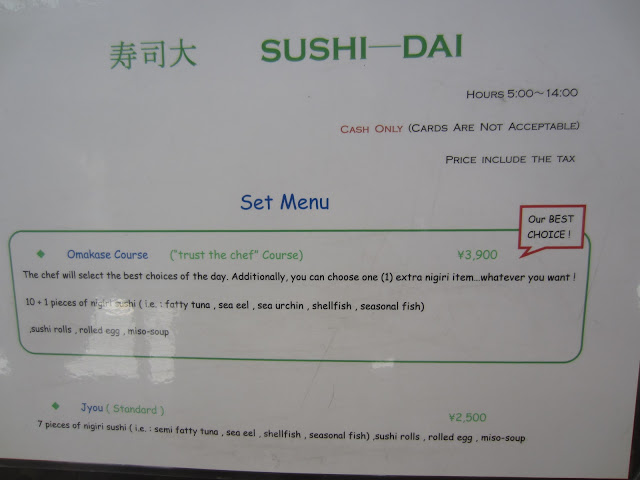 You can choose either the Omakase Course (3,900 Yen/~$50.00 CAD) which consists of 11 pieces of nigiri sushi that the chef deems freshest along with a few maki rolls, rolled egg (tamago), and miso soup, or the Jyou Course (2,500 Yen/~$32.00 CAD) which has 7 pieces of nigiri sushi along with the maki rolls, rolled egg, and miso soup. I say, go with the Omakase course. If you are on vacation, you might as well spend that extra bit to get something extraordinary. 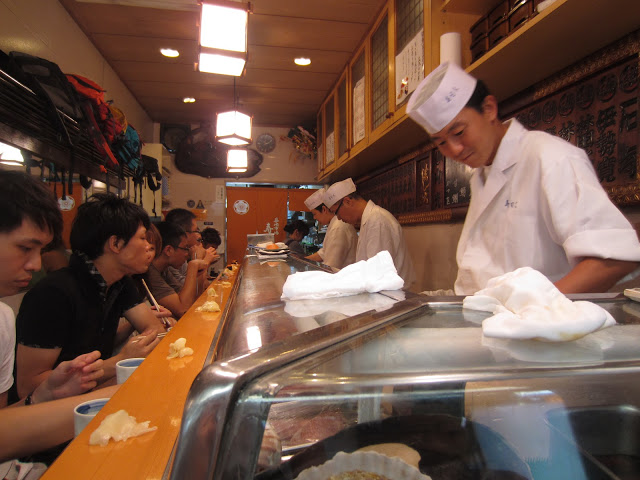 Once you go in, the sushi chefs will greet you and start chatting with you. One nice thing about Sushi Dai is that when you get seated, no one rushes you to eat everything super quick. They want you to enjoy every piece of sushi and you will forget about the excruciating long wait before you sat down. 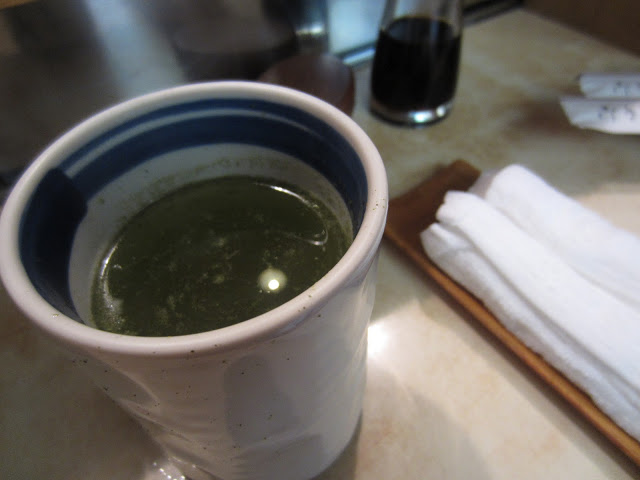 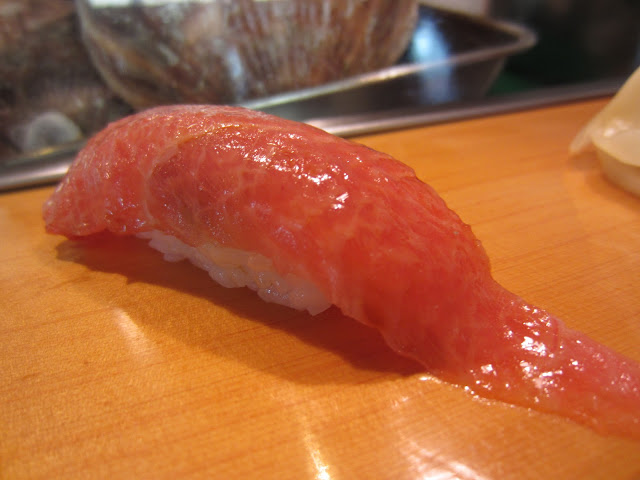 The first nigri was Toro (fat tuna belly) and it was unlike any toro I’ve seen in Vancouver. The marbling of this fish is ridiculous so you know it’s going to be silky soft and fatty. It was definitely delicious but it lacked the melt-in-your-mouth texture that everyone was talking about on their blog (I read reviews before I came :P). 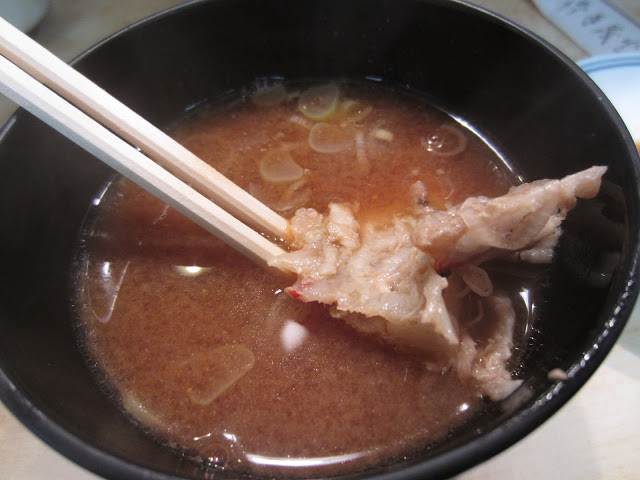 The miso soup was made with a lot of fish bones, thus giving the miso broth an incredibly rich fish flavour. 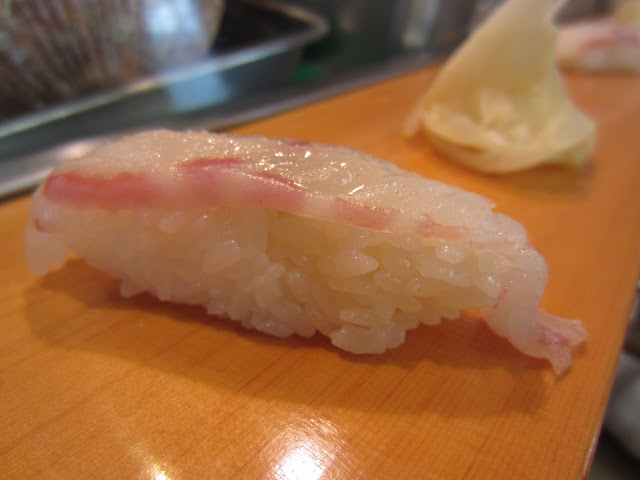 I believe this one was Hamachi but I can’t be sure because it wasn’t one of the outstanding nigris out of the bunch. 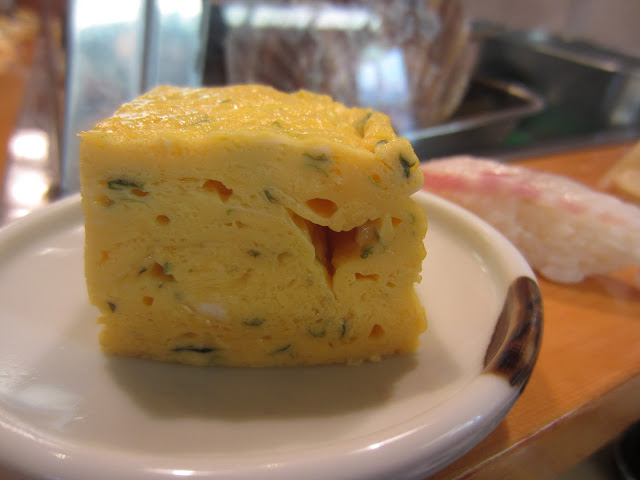 The Tamago (sweet rolled egg) was fluffy and fresh of the steamer. Deeeelicious! People who know me know that I love a good ol’ steamed egg. 😀 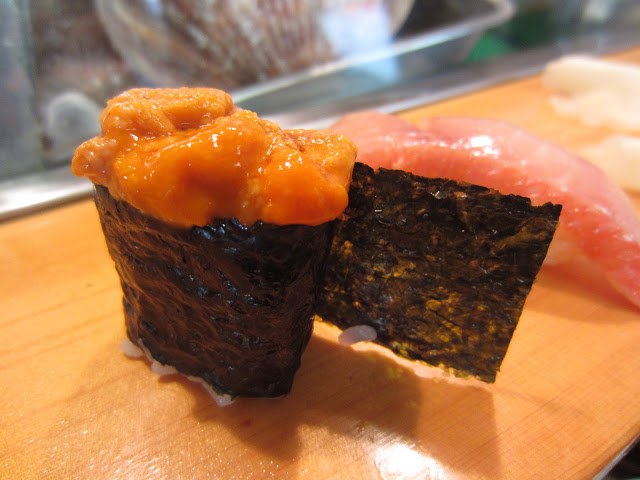 The Sea Urchin (aka Uni) was Trixie’s favourite. Each individual uni on there was small but did not have the overwhelming ocean-y taste that you sometimes get with sea urchin.

I normally know Red Snapper as the fish Asians usually steam and eat with soy sauce, ginger, and green onions. But I never knew it could taste delicious raw! Another incredibly fresh piece of fish. It tasted great with or without soy sauce! 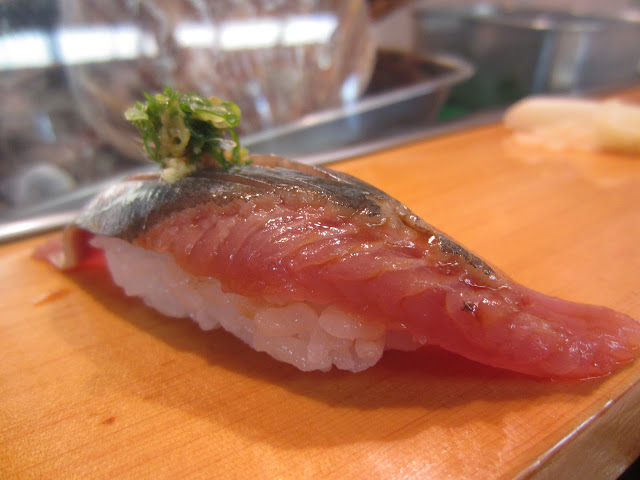 The chef said this was called Saury, and though I’ve never had saury in my life, it was very delicious and tasted a bit like tuna.

Now comes one of my top three. The Surf Clam. When he put this in front of me, the surf clam was still moving (NOT JOKING)! It was an amazing sight and since ‘still moving’ equates to ‘seriously uber fresh’, I was excited to attack consume it. 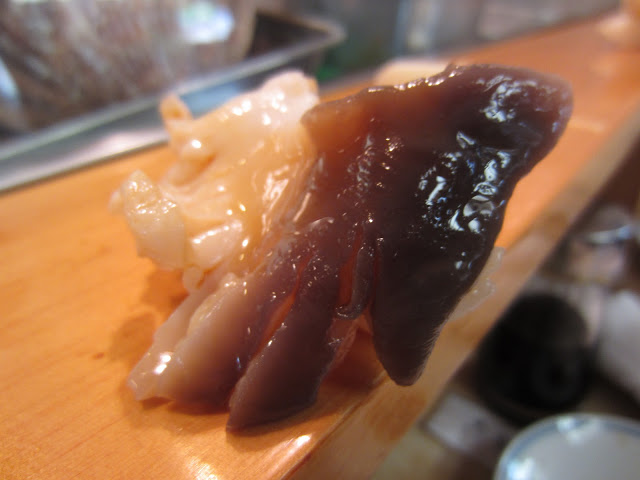 The clam was gigantic and definitely a two biter!!

The Marinated Tuna was good but both Trixie and I found it to be the least exciting of the bunch. The texture wasn’t as melty or smooth as we would have liked but it was still good. 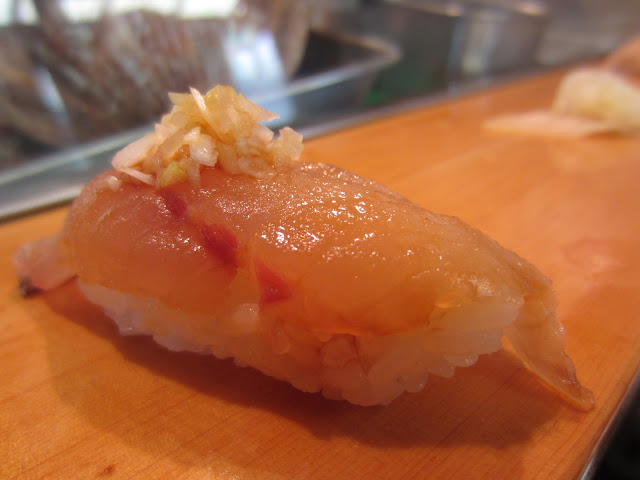 If I’m not mistaken, this is Mackerel. I normally dislike eating mackerel raw, but because this mackerel was  a lot fresher than the ones here in Vancouver, it tasted pretty good. Not my favourite fish to eat raw, but definitely worth a try. 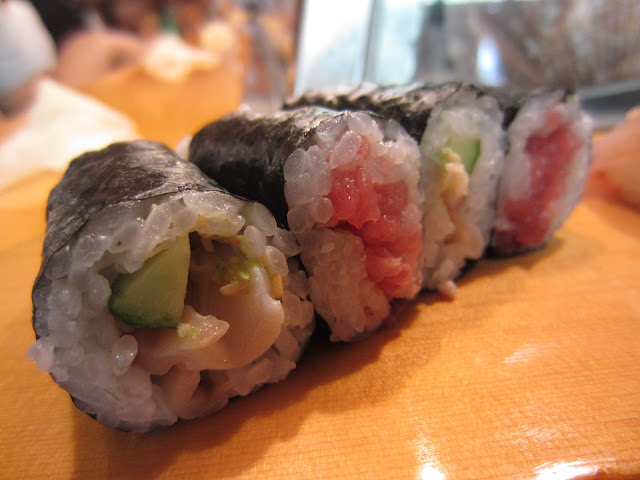 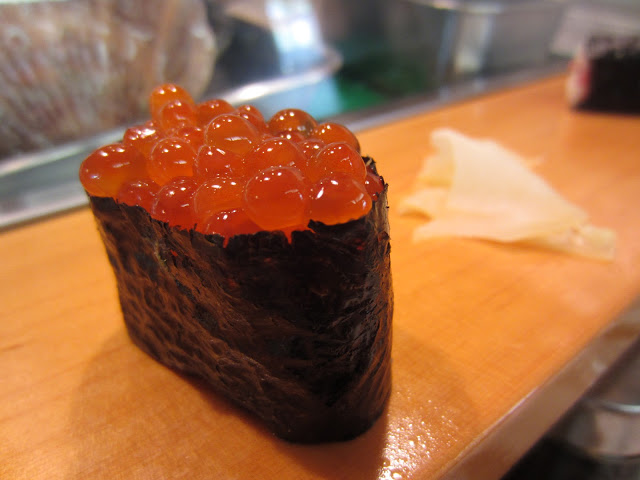 This was also one of my favourites, the Ikura (fish roe) nigri. It is hard to describe why this was so amazing but just trust me in that if you normally like ikura, you will love it here. 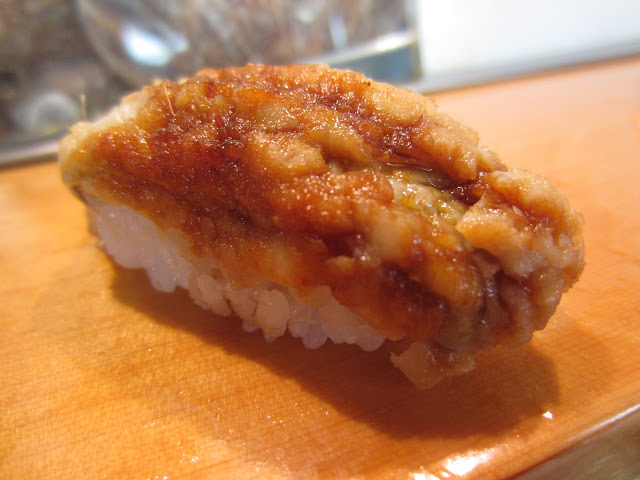 The Freshwater Eel (steamed I think) was another notable one as it tasted nothing like Unagi. I remember the chef telling us that Unagi is fresh water eel but this one is from salt water. Anyways, this tasted nothing like unagi, largely because of its fluffy yet mushy texture. This should be eaten without soy sauce to fully taste the flavour. 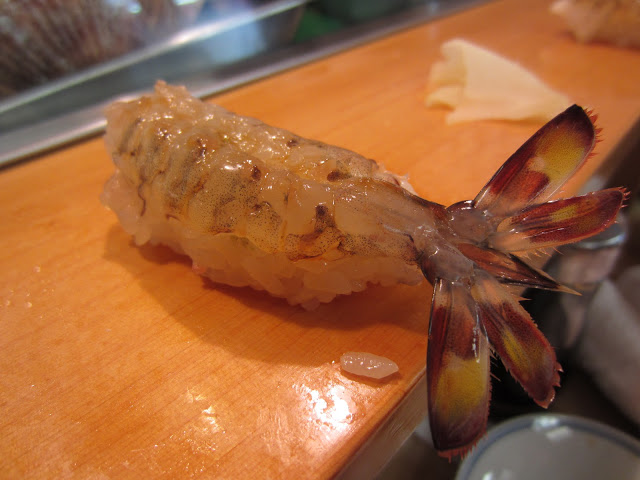 Last but not least, you get to choose your own nigri out of the menu they provide. I went with the Amaebi which is raw prawn. THIS, my friend, was of epic proportions. When I say this place uses only the freshest ingredients, I mean it. When the chef set this in front of me, I almost jumped up when I saw the tail twitching (just a tiny bit)! For some people, that might sound disgusting, but I’m sure I am not the only one that finds this incredibly fascinating and intriguing! 😉 Anyway, this was undoubtedly fresh and delicious, and not at all slimy like all of the other amaebi I have tasted in Vancouver. 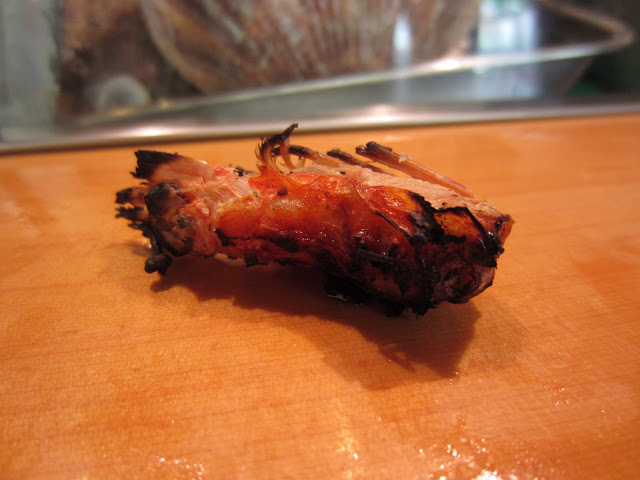 They also grill the prawn head for you to eat. This is an acquired taste. I enjoyed it but Trixie didn’t.
All in all, just go. If you are going to be in Tokyo, don’t miss out on the Tsukiji Fish Market, and Sushi Dai or else I’ll say “I told you so” when you regret it. The sushi here was so good that Trixie almost cried and we were on a (sushi) high after we left. Sounds too good to be true? Try it out for yourself and let me know!

Check out my other Japan foodie posts!

5 Things to Expect at a Japanese Ryokan 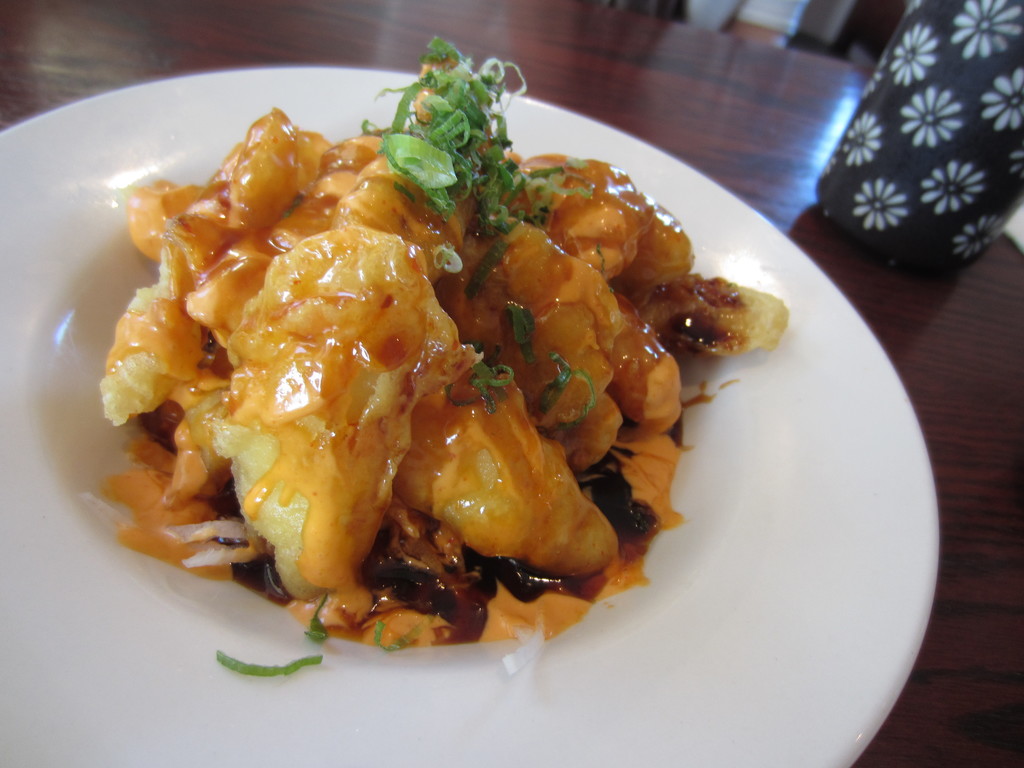 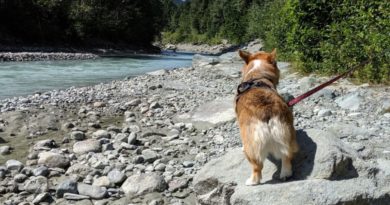 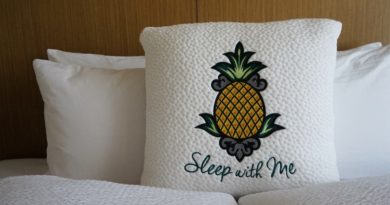