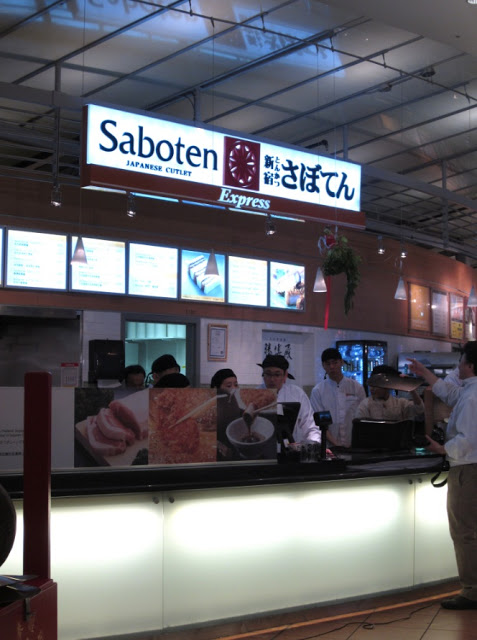 Last Sunday, Janice (goodeat) kindly invited Steph (Krispy Bites)
and I to the Saboten grand opening/media tasting event. We were joined by Gary
and Taya from (Eating in Vancouver) as well. Feel free to click on their links
to check out their reviews of Saboten!

Saboten originated from Shinjuku, Japan and they specialize
in tonkatsu which is a style of deep fried pork cutlet. This is their first
North American location so there was much anticipation about their grand opening. 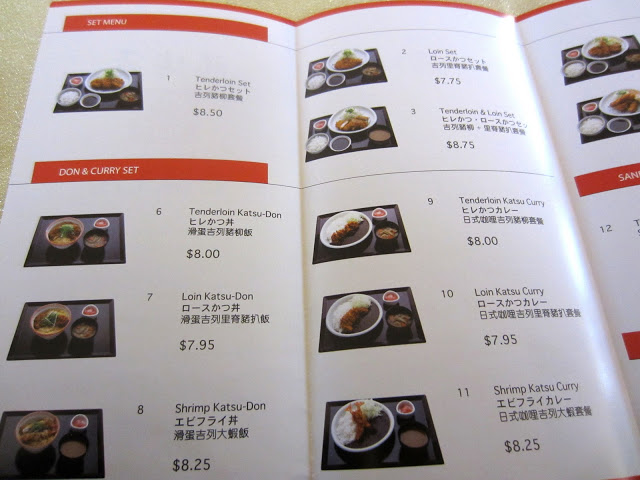 While we were waiting, we were given a take out menu. Have a look and see what you think. Each meal is around $8-9 except for the Tenderloin
Katsu Sandwich. 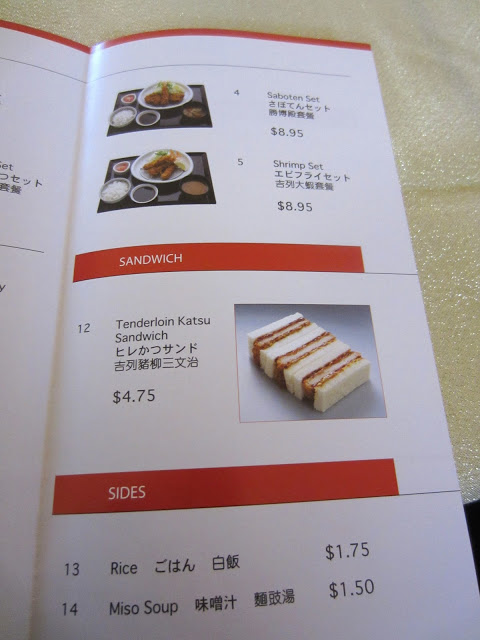 If you just want to try out their tonkatsu without all the
other stuff, I suggest getting the sandwich as it is quite affordable.

Each of us were given the Saboten Set (without soup and rice) and it consisted of loin,
shrimp, tenderloin, and shredded cabbage. 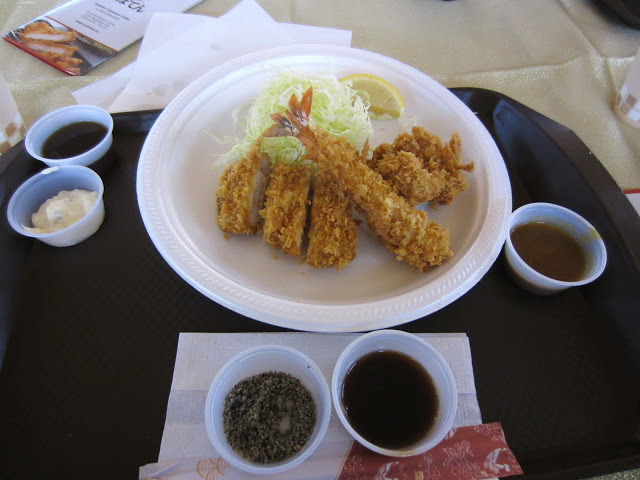 The set also came with five condiments. The first thing that
caught my eye was the freshly grounded black sesame. The aroma of it filled the air
and it was beyond heavenly. 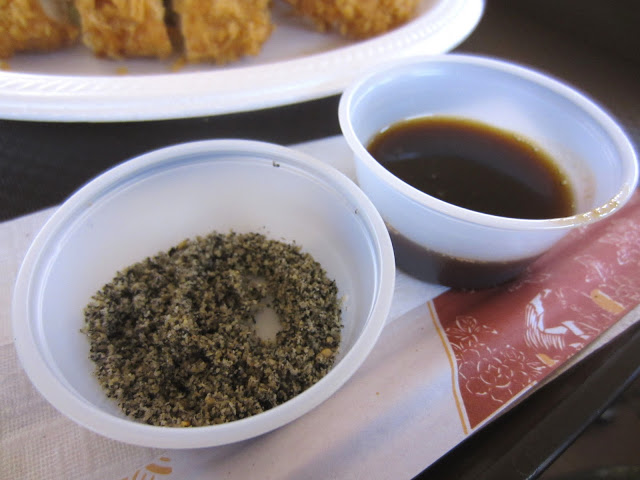 Here is a closer look at the grounded black sesame (left)
and tonkatsu sauce (right). You are suppose to dip the cutlet first into the
sauce, and then into the black sesame so it will stick. This was my ultimate
favourite condiment for the cutlet. 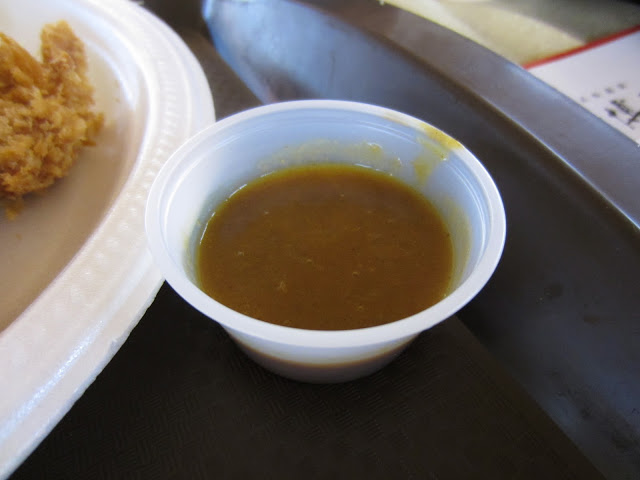 The curry dipping sauce also went great with the cutlet but I thought it
was overshadowed by the awesome black sesame. 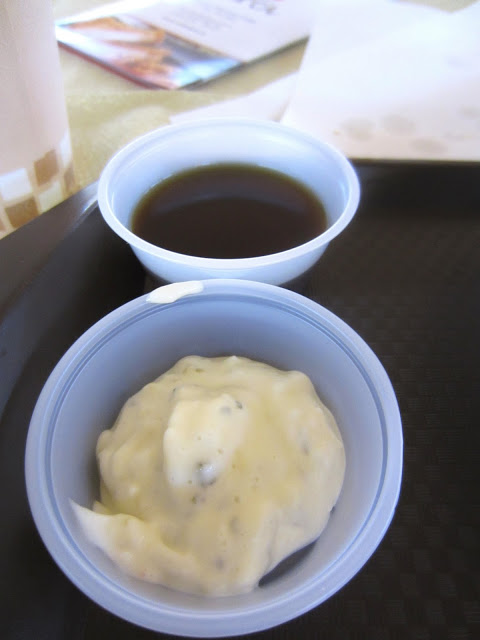 The home made tartar sauce (for the shrimp) was a bit thick
for my liking. The vinaigrette for the cabbage (top) however was delicious! I
really enjoyed this vinaigrette as it was light, flavourful, and went perfectly
with the thinly shredded cabbage. 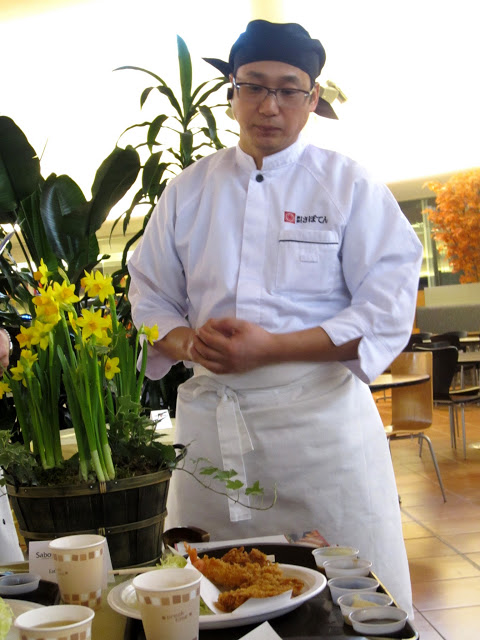 The executive chef came by to give us more information on
the preparation of the food as well as answer a few questions. He said his team
of chefs flew in from Japan a few weeks earlier so they could take extra time
to source quality ingredients.

He said the cabbage is sourced from California and cannot be
found in our local supermarkets. He also mentioned that the tenderloin is of
premium quality and that the breadcrumbs used to coat them are from fresh bread
made in-house daily. The fresh breadcrumbs really made a difference as it
provided such an awesome crunch to the cutlet. The tenderloin, loin, and shrimp
were all great in my opinion and not oily/greasy at all. You can even see in
the picture that there is not a drop of grease on the plate. 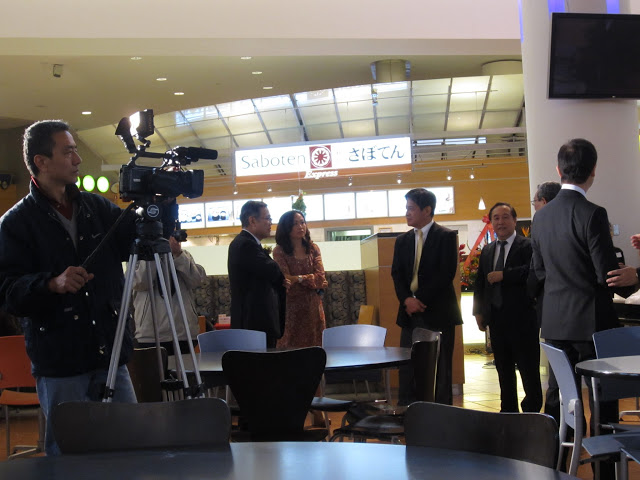 Fairchild Media was also present at the grand opening so it
was pretty cool!
Overall, I think Saboten is a nice addition to the Aberdeen food court. Granted, I haven’t tried any of their actual Tonkatsu sets so I can’t vouch for their food on a normal basis.
Overall Rating: 3/5
Happy Eating! 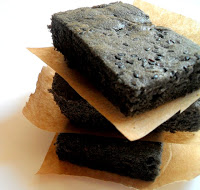 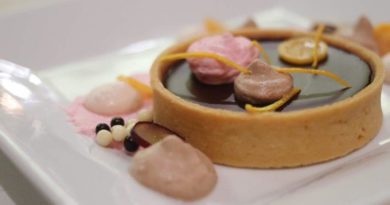 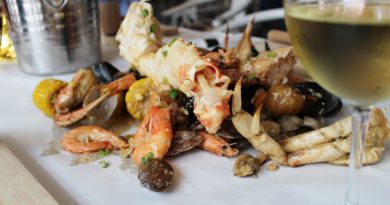