As a true Richmondite (I’ve lived in Richmond, BC for over 18 years), I’m always in awe of the amazing Asian food we have at our fingertips every single day. It sounds crazy but I’ve eaten at certain dim sum restaurants in Hong Kong where I thought “hm… we have better dim sum like this in Richmond”.

So needless to say, I was surprised-but-not-surprised to see that Tourism Richmond created a Dumpling Trail which was listed among CNN Travel’s list of “12 of the world’s most enticing food and drink trails“! 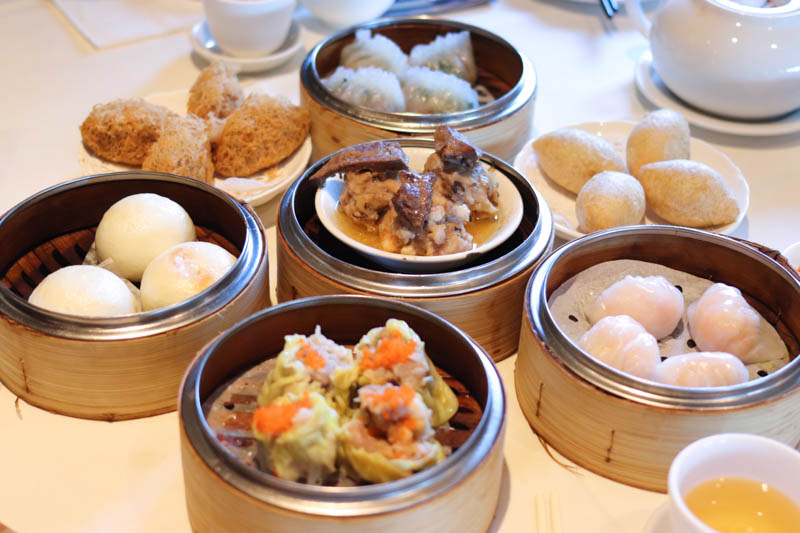 So what is this dumpling trail you might ask?

Well, it is a self-guided tour of some of the city’s best dumpling hot spots! They have a collection of 20 restaurants serving up the most delectable dumplings this side of the Pacific. Some of the dumplings you can expect to try include: Xiao Long Bao (Shanghainese soup dumplings, SUPER YUM), Har Gow (Cantonese dim sum favourite), Siu Mai (another delicious dim sum fav), and Wontons (for all you shrimp lovers out there). 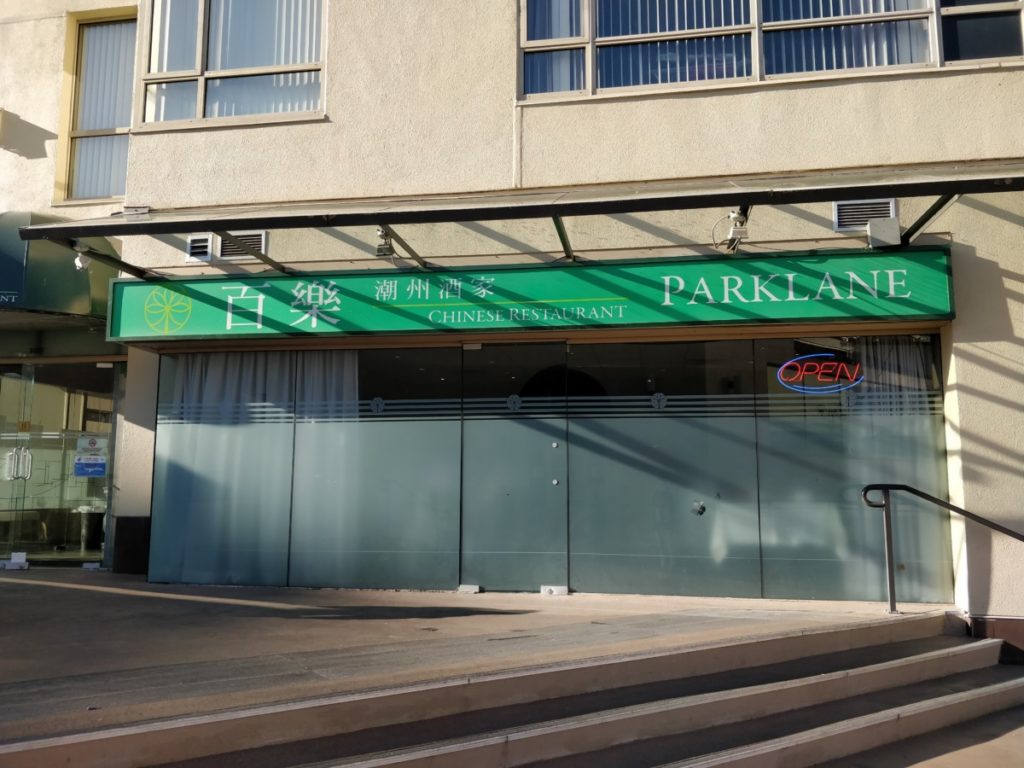 I went on a Tourism Richmond hosted media tour to try out four of the 20 restaurants on the Dumpling Trail. First up was Parklane Chinese Restaurant. 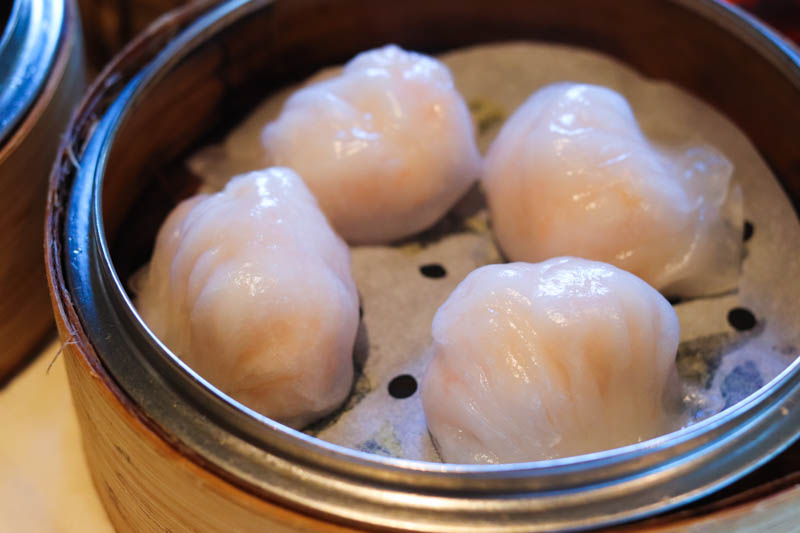 This is the famous Har Gow also known as Steamed Shrimp Dumplings ($6.75). Even though the dumpling is all about the plump fresh shrimp inside, I actually LOVE eating the skin. It’s buoyant, light, and tastes a little like mochi. 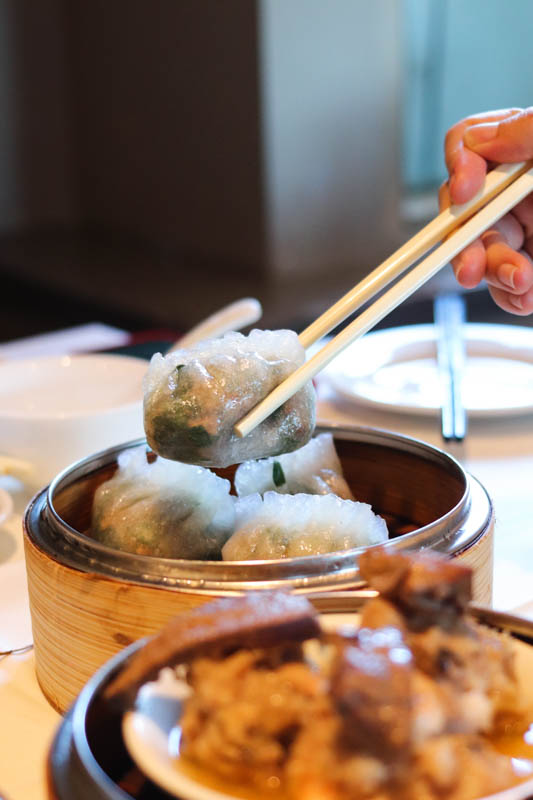 This is Parklane’s unique specialty dumpling and it’s called Steamed Pork & Reddish Dumpling with Peanut ($6.45). This dumpling originated from Eastern Guangdong and is also known as a Chiu Chow Dumpling. There are many textures within this dumpling from the meat, peanuts, chives, and radishes so I absolutely adore getting this whenever I’m here. 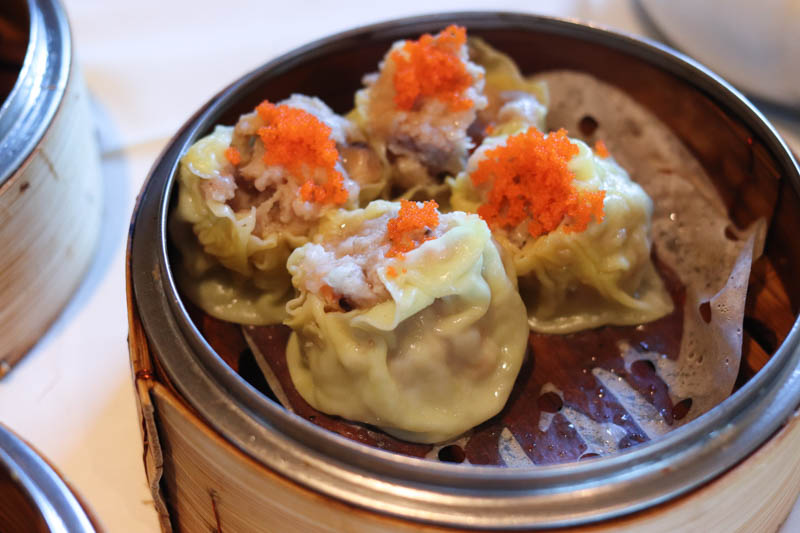 The classic Siu Mai aka Steamed Mince Pork Dumpling ($6.45). This is always ordered whenever we go out for dim sum because people just can’t get enough! 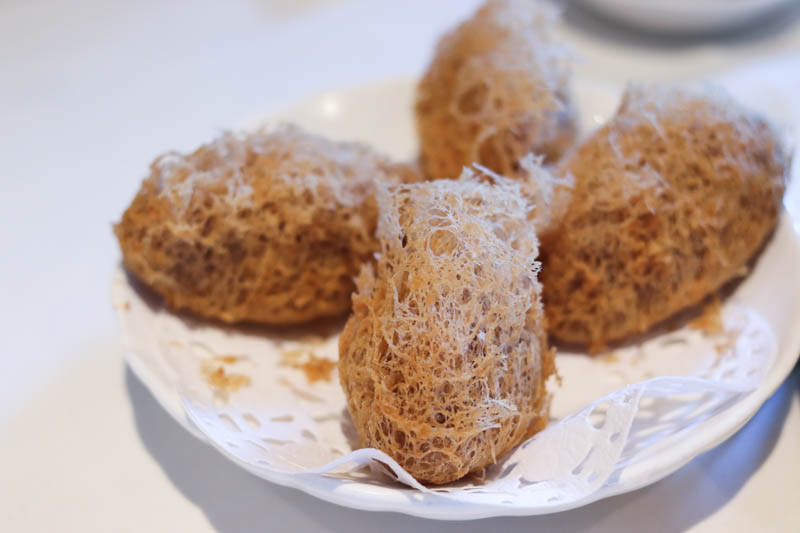 Now for the more adventurous kind of dumplings… This one is called Deep Fried Taro Root Dumpling ($6.75) and it was one of my favourites of the bunch. I’m not sure how it’s made but the result of frying this dumpling is this delicate web of crispy stringy batter all around the taro dumpling! What’s even cooler is that inside has a delicious duck and curry filling!

I’ve never tried this prior to this media tour and I can ssafely say, you should only get this if you’re okay with eating innards. This Steamed Pork and Shrimp Paste with Pig’s Liver ($6.45) is delicious but it definitely is an acquired taste. 😀 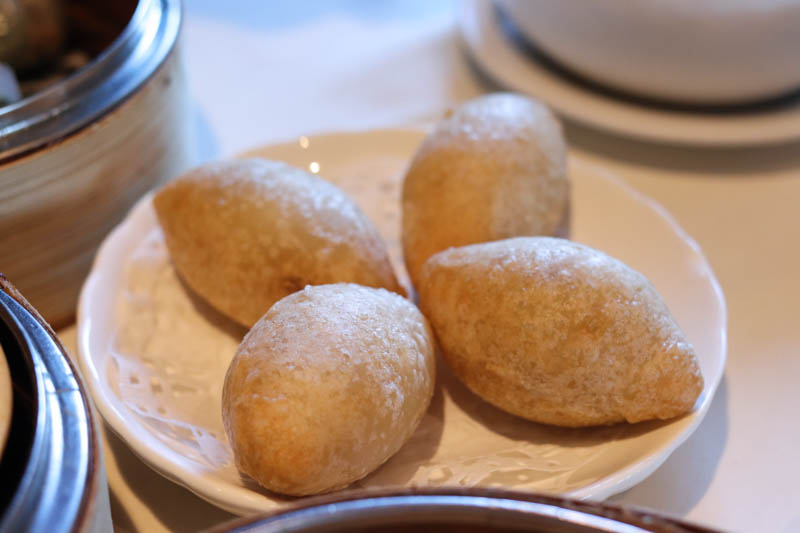 This Deep Fried Minced Pork Dumplings ($6.25) may look really bland and uncool but it actually has one of the best flavours and textures of all the dumplings. The skin is made with glutinous rice flour so it’s like a deep fried mochi ball with scrumptious savoury meat. That changes things for you now doesn’t it? 😉

Last but not least, this isn’t a dumpling but I would highly suggest you order it. It’s called Steamed Egg Yolk Buns ($5.95) and they’re the best thing on earth. It’s extremely Instagrammable and it tastes absolutely delicious too. 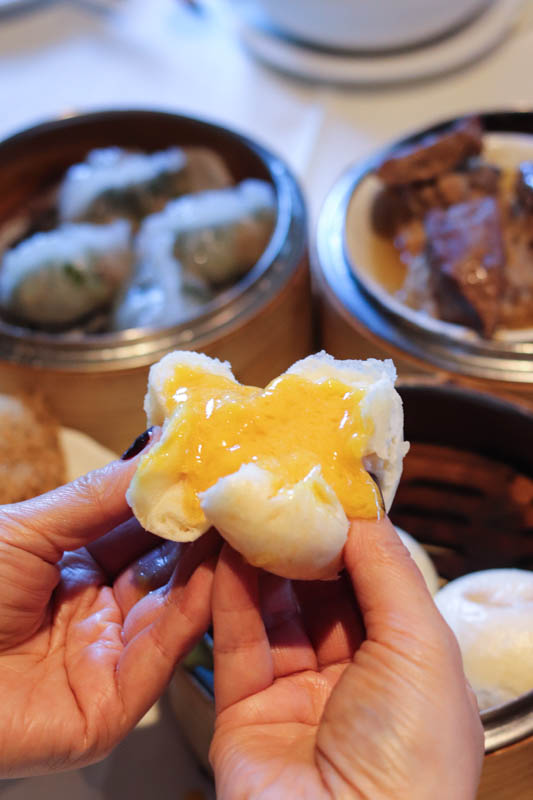 Inside this steamed bun is a hot, runny, salted egg yolk custard and it will just ooze right when you break it apart. It’s to be eaten with caution as it can get all over your hands or explode on your shirt! 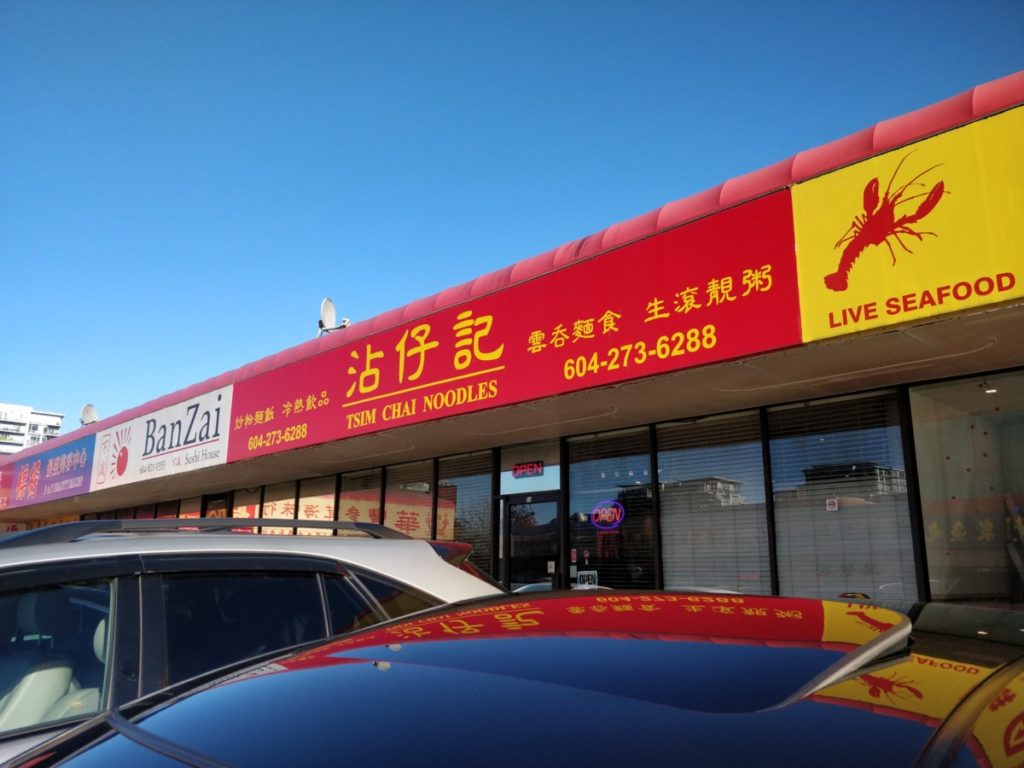 The next stop on our media tour is Tsim Chai Noodles! This restaurant has been around for ages and EVERYONE knows it’s the best place to get fresh and authentic wonton noodles in soup. 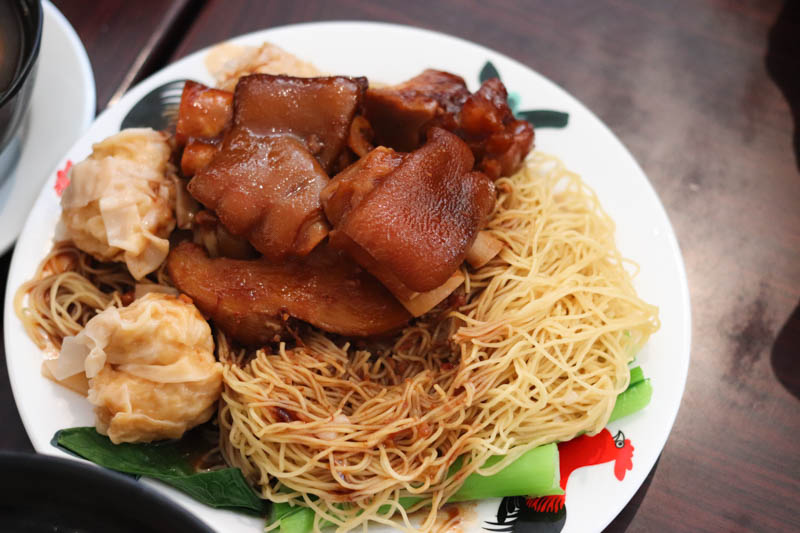 We started off with the Pig’s Knuckle and Wonton ($10.75) which consisted of multiple wontons, some braised pigs feet (aka knuckle), on top of dry egg noodles with sauce. This is a very common Chinese dish and pig’s feet is a very normal thing to eat. If you want to be adventurous, I’d say go for it and order this dish! 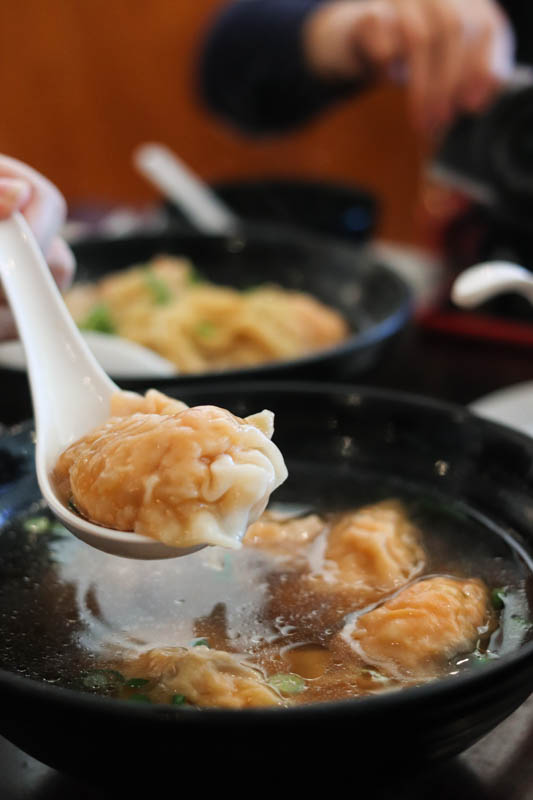 These are the Sui Kau and we got the Sui Kau in Soup with No Noodle ($8.25). These were my favourite dumplings from this restaurant because the dumpling filling had an abundance of crunchy wood ear mushrooms that really add another dimension to the soft dumpling. 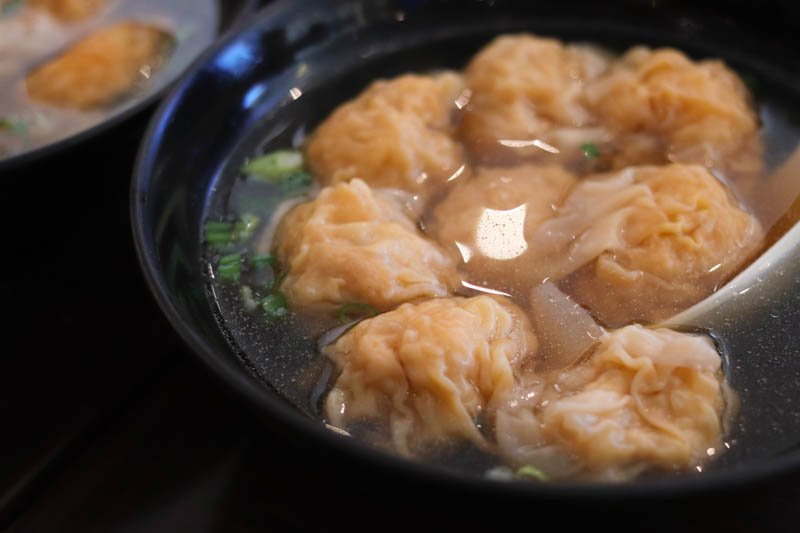 These Fresh Prawn Wontons in Soup with No Noodle ($8.75) were also pretty spectacular. The prawn filling was incredibly generous, and the skin is ever so thin and delicate. The broth on its own is also clear, full of umami, and pairs perfectly with the shrimp flavour. 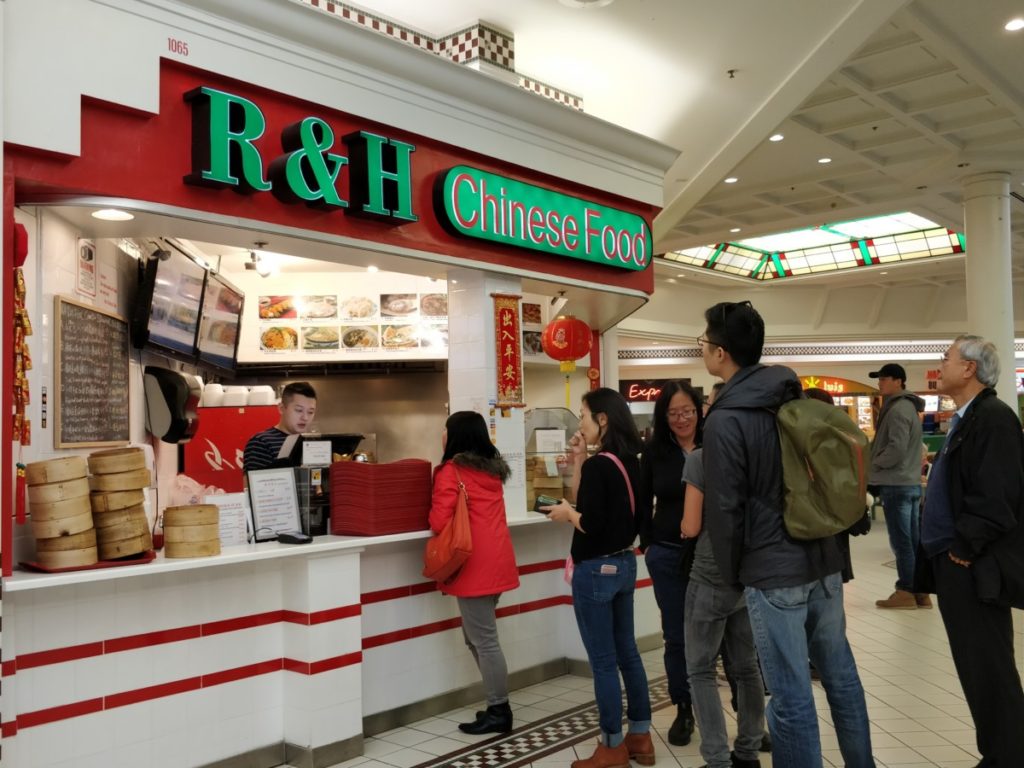 Right from the window you can tell this is authentic stuff. They have nothing to hide so they make their dumplings fresh right on the counter.

These Grilled Juicy Pork Buns ($7.69) were seriously amazing. It took 10-15 minutes to cook which is completely understandable as it’s probably the best juicy pork buns I’ve ever had. Do yourself a favour, get this and don’t ask questions. 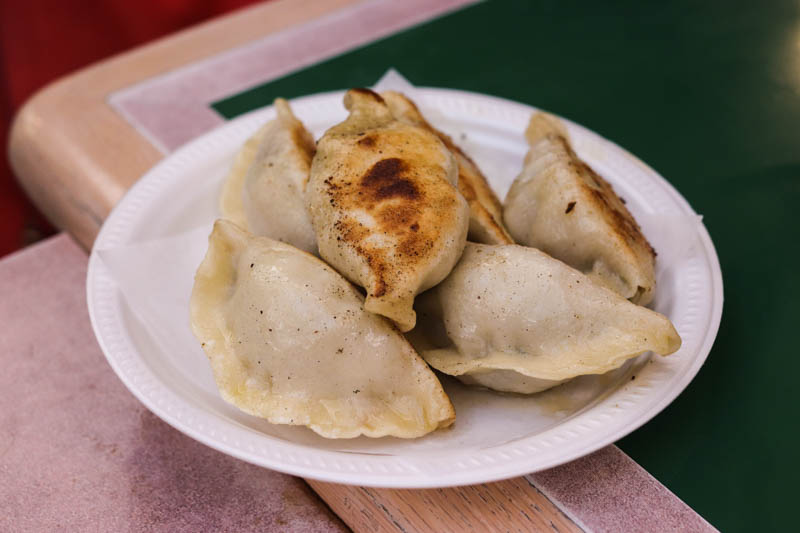 I wasn’t sure if this was going to be good because it seemed a little pricey for 6 dumplings but the quality completely made up for it. These are Grilled Pork Dumplings with Chives ($7.69) and they also take 10-15 minutes to cook after you order. They’re generous in size, grilled to perfection, and everything from the meat filling to the dumpling skin is made in-house. 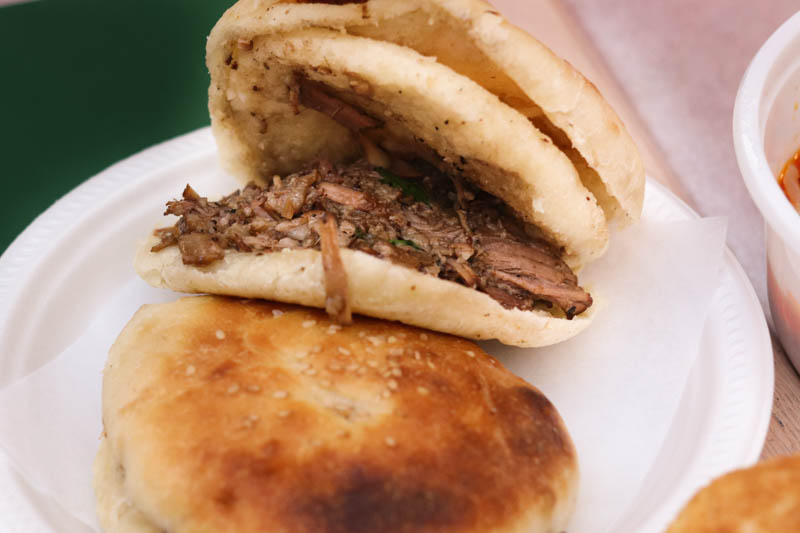 If you’re looking to get something a little different, I’d recommend the Chinese Beef Burger (2 for $9.39). The buns are not your typical hamburger wheat buns. Instead, they’re more dense and I believe they’re made with rice flour. The stewed beef has incredible flavour so you can’t go wrong there. 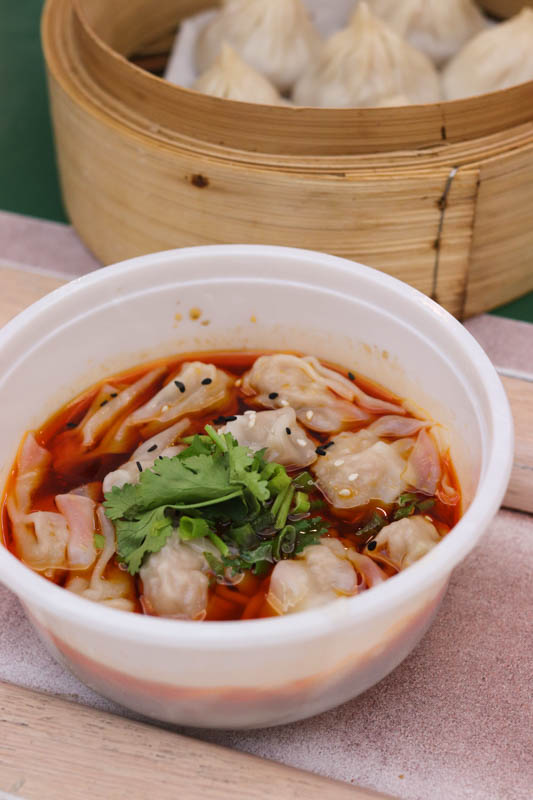 Last but not least are these Wontons in Chili Sauce ($7.69). They may look frighteningly scary but it’s actually not that spicy at all (and I don’t eat spicy). The wontons again are freshly made, and the long flowy dumpling skin gets to soak up all the yummy spicy oil/sauce. 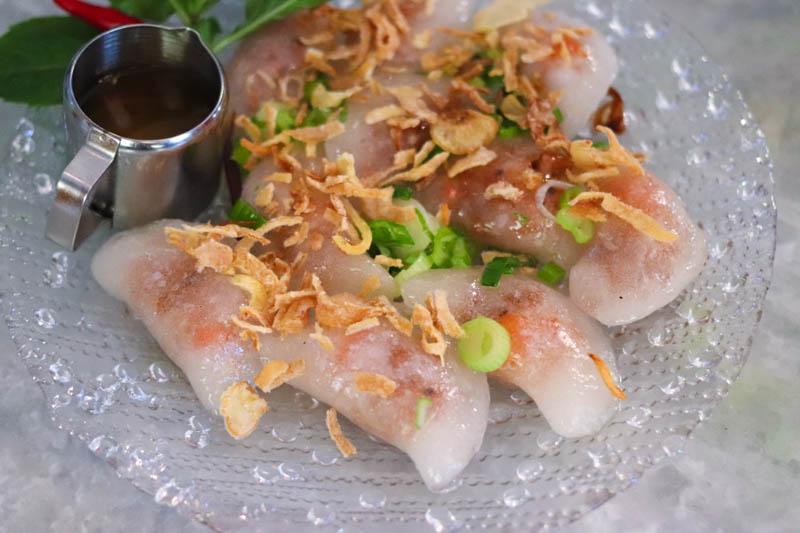 Our last and final stop of the day was Banh Mi Tres Bon. They’re a home-style Vietnamese restaurant that pays homage to the food their family grew up eating and loving and their goal is to recreate those dishes as authentically as possible for all of us to enjoy.  These Banh Bot Loc – Shrimp & Tapioca Dumplings ($9) are like little pockets of treasure. The skin is translucent and chewy while the filling is made with an aromatic shrimp and pork paste.

This isn’t on their regular menu but it’s the Mung Bean Dumpling also known as Banh It Tran. It’s a soft, plump, sticky rice flour dumpling and inside is a savoury mung bean filling.

It comes five to a serving and is meant to be dipped with a Vietnamese vegetarian dipping sauce. 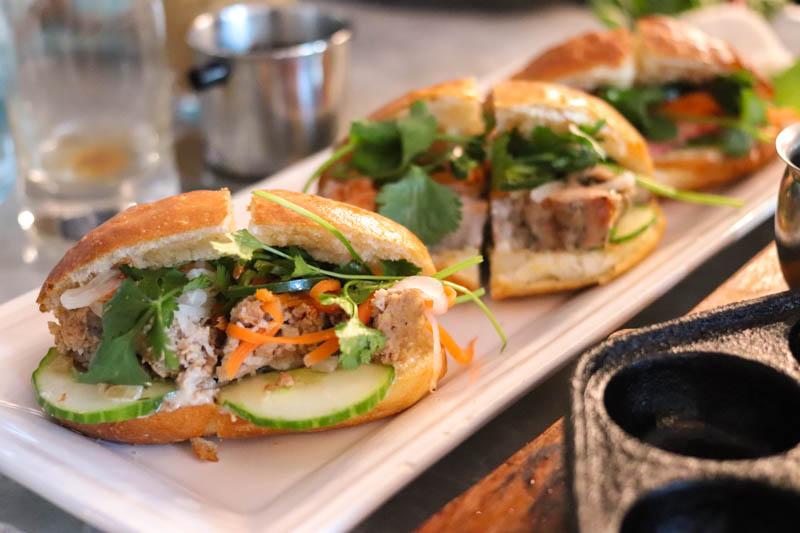 Since their name is Banh Mi Tres Bon, we had to try some of their banh mis! This one is the 3 Mini Sandwiches Trio ($11) and comes with a cold cut banh mi, meatball banh mi, and a chicken banh mi. Personally I liked the meatball one the best but they were all really really delicious! 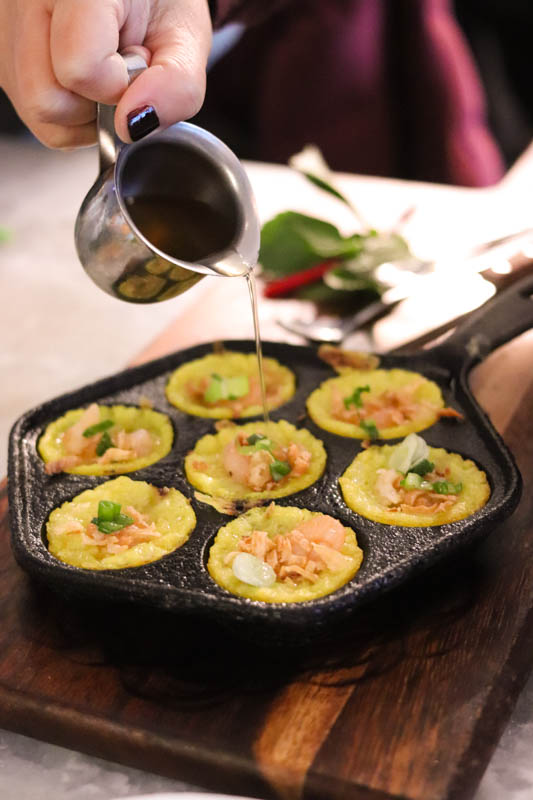 I haven’t found many places in Vancouver that serve these Savoury Mini Crepes ($7) so I was really excited to see this on the menu! These crepes are crispy on the outside, soft on the inside. It’s a great appy to share and it’s not overly heavy. Definitely recommend!

All in all, I think the Dumpling Trail concept is genius and if you ever visit Richmond, BC, I hope you will give it a try and let me know what kind of dumplings you liked the most! Richmond has such a plethora of amazing restaurants that you really can’t go wrong with any of them!

🍜 I know these noodles in a bag are no longer a

🌟😱 Wondering which FOOD COURT this is?! 😱