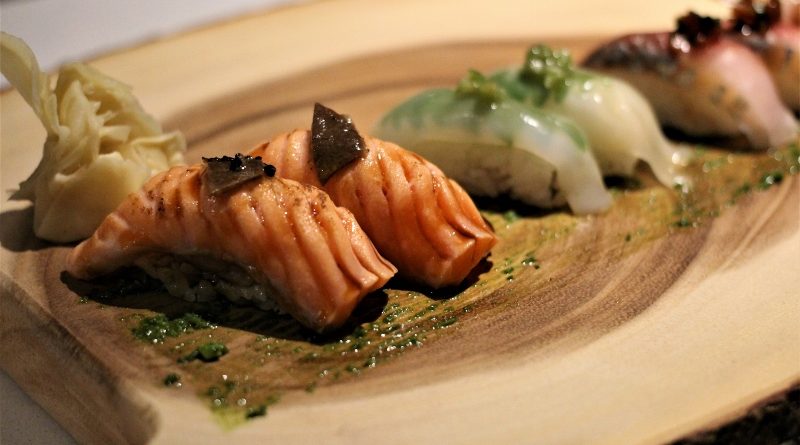 Kitchen by Yugo is a French Japanese fusion restaurant that opened up about 6 weeks ago on Denman Street. It used to be called Chengdu Szechuan Bistro (see my post here) and while it’s great to see new businesses pop up, it is sad to know that the other businesses I visited in the past and enjoyed before could not sustain themselves in this tough industry. 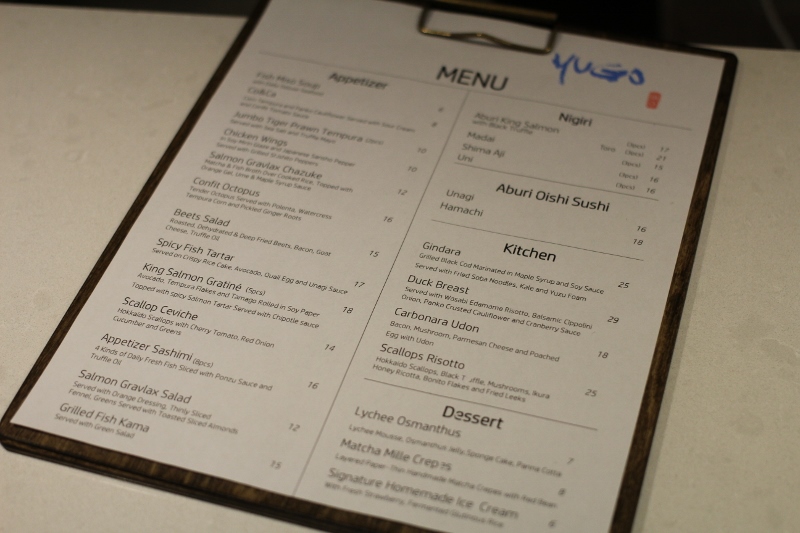 When I looked at the menu, I instantly fell in love with most of the dishes. I love trying interesting flavour combinations as well as unique ingredients so everything from duck breast with edamame risotto to carbonara udon sounded ah-mazing. 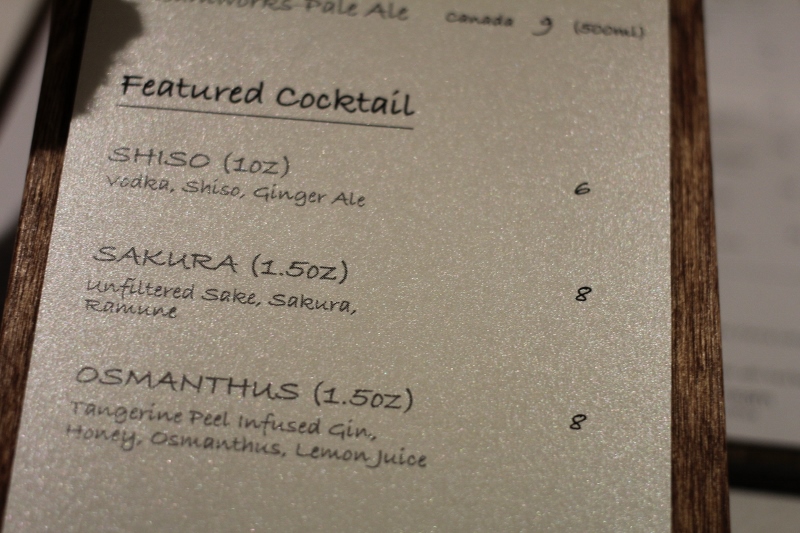 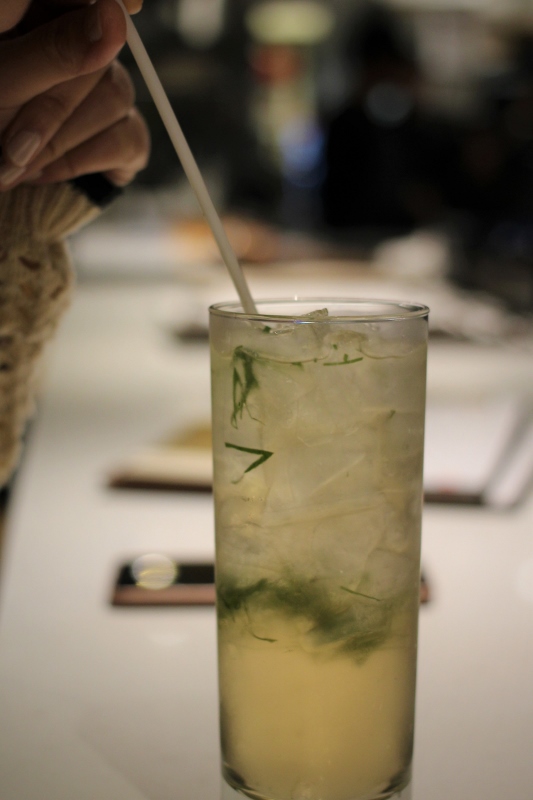 On their drink menu, I was surprised to see a cocktail made with shiso leaves. Shiso is a type of beefsteak plant and is usually seen in Korean and Japanese cuisine. I gave it a try and it was really refreshing and light! Even though it’s part of the mint family, it’s not as minty as a traditional mint leaf so it’s a great in-between herb to use for a light cocktail. 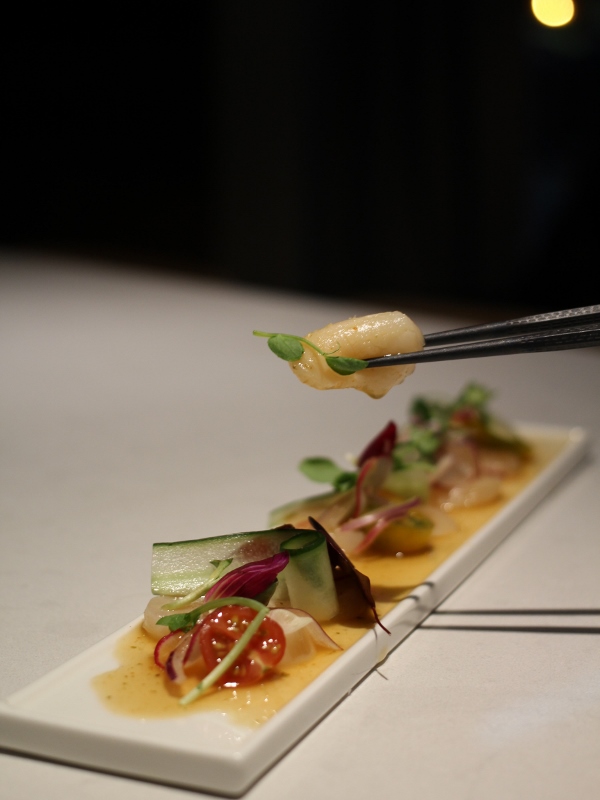 The Scallop Ceviche was one of our favourite dishes and it is comprised of scallops imported from Hokkaido, heirloom tomatoes, cucumber, and a vinegar based brine. The scallops were plump, juicy, and tasted incredibly fresh. 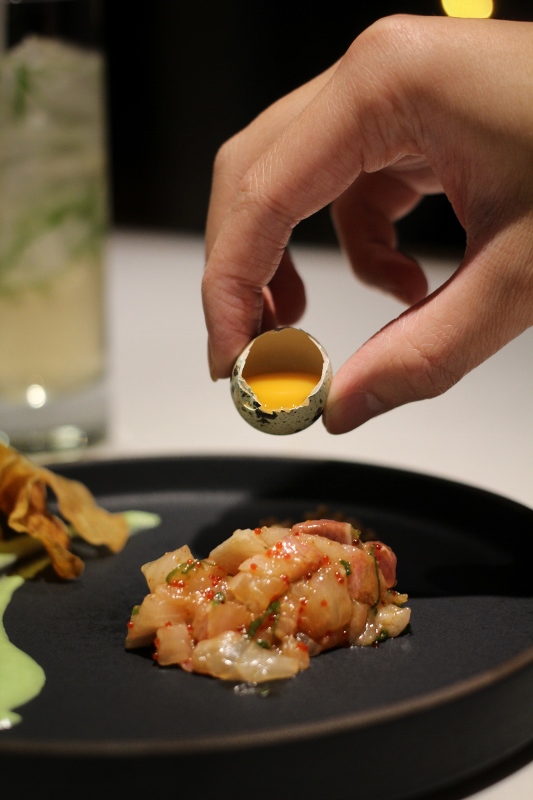 Even though the Fish Tartare was on the small side, it was mighty delicious. Ours was a spicy chopped Hamachi with mustard seed, quail egg, lotus root crisps, and an edamame puree. 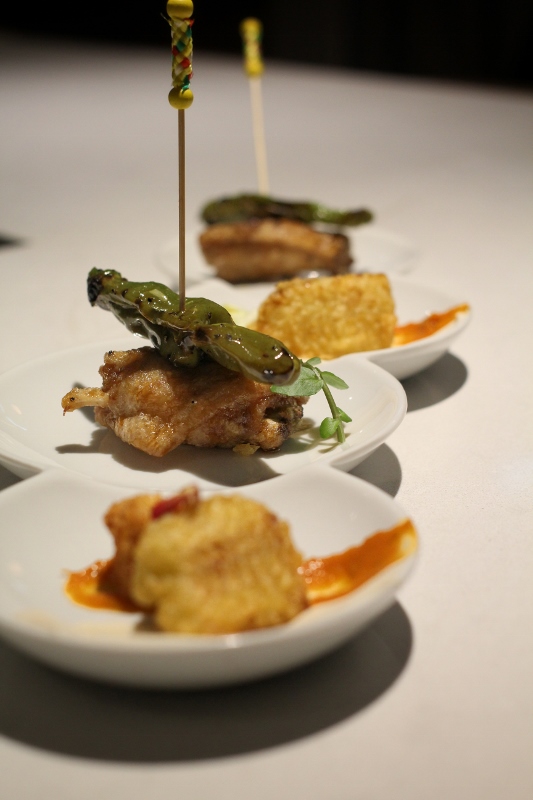 The Co&Ca is a play on panko cauliflower and a tempura corn, served with a homemade sour cream and a confit tomato sauce respectively. While the Chicken Wings was served with a grilled shishito pepper to keep it interesting. The pepper is not spicy at all, and to get the full effect you really have to eat the chicken wing and the pepper in one bite. 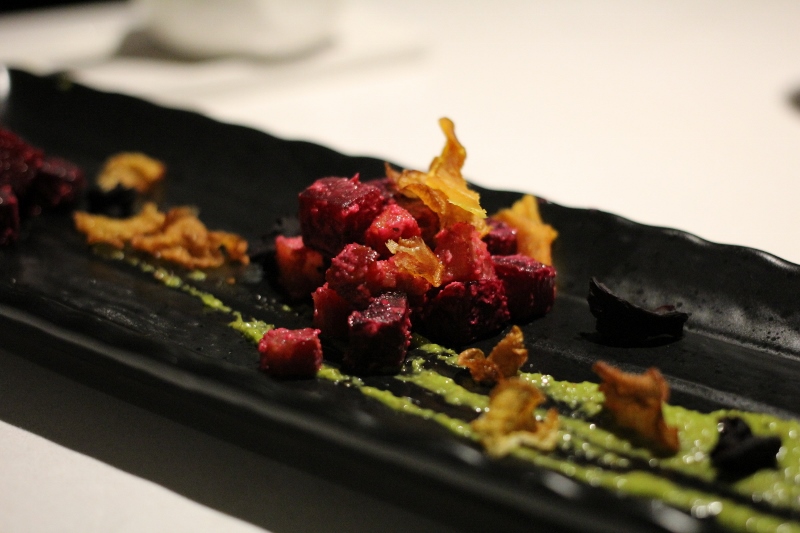 Their Beet Salad is a play on beets three-ways, roasted, fried, and dehydrated. It comes paired with some pancetta, goat cheese, and truffle oil. Just listening to the ingredients you know it’s already a winning combination. 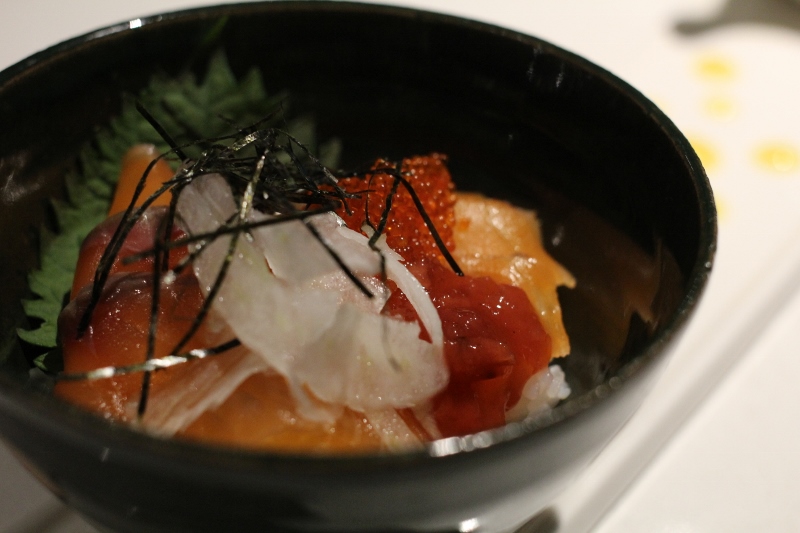 Their Gravalax Chazuke was something I really look forwarded to because I love the chazukes where you pour green tea into rice with ikura. At Yugo, they topped the rice with shiso, onion, smoked salmon, tobiko, and nori. And instead of green tea, they subbed it with fish broth. I enjoy ikura in Chazuke more but I found this to also be satisfying. 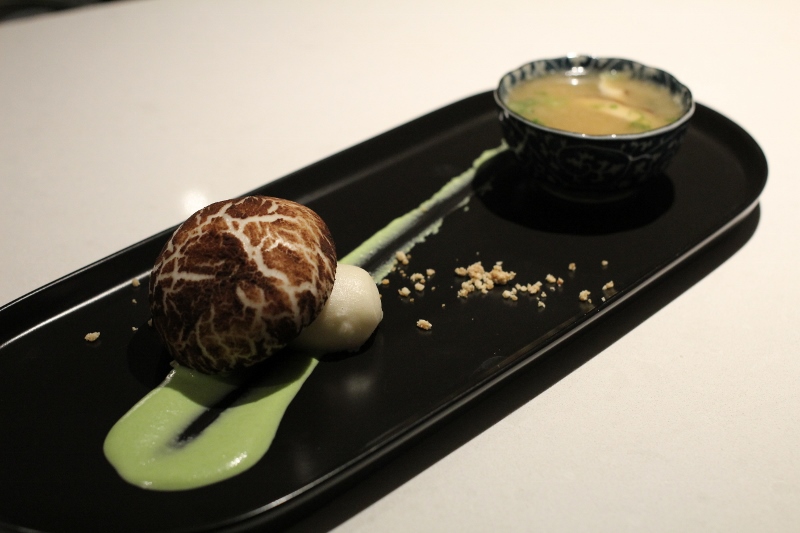 Now this dish was a feast for the stomach, and the eyes. This looks like a mushroom, but it’s actually a steamed bun (filled with mushroom), made to look like, an actual mushroom. It is paired with a fish miso soup, edamame puree, and a cheddar cheese crumble. The puree and crumble in my opinion didn’t added that much to the dish flavour-wise but was definitely very pretty. 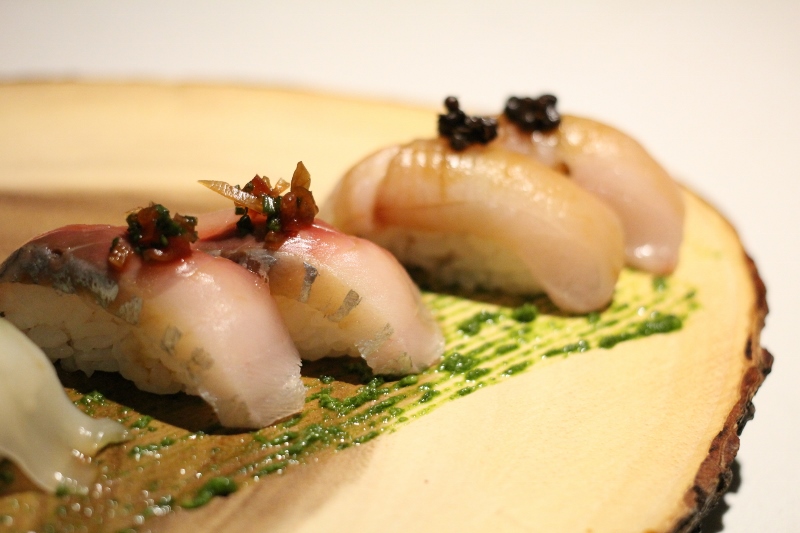 For the nigiris, we tried four different kinds. They all sat on top of pesto, and each had an individual unique topping on top crafted by the chef. No soy sauce to be seen here. 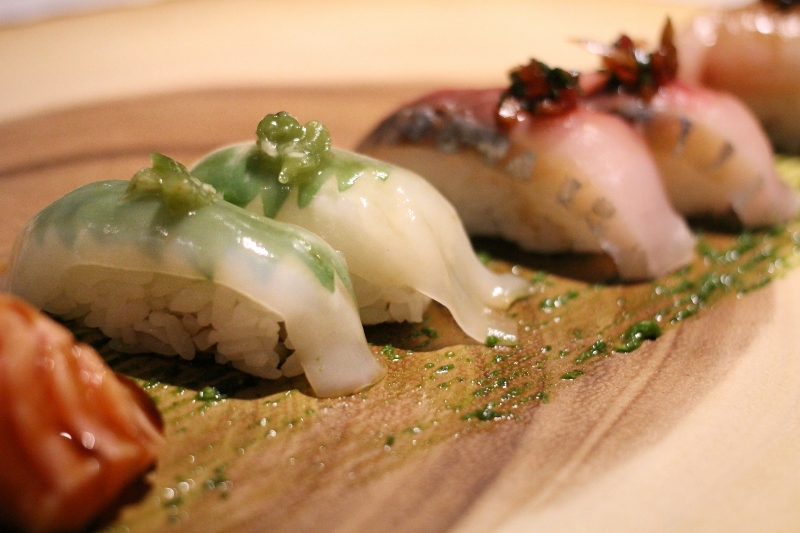 I really enjoyed the Aori-ika which is a bigfin reef squid with shiso. The ratio of rice and protein was adequate, and the rice did not fall apart when picked up which was a good sign. 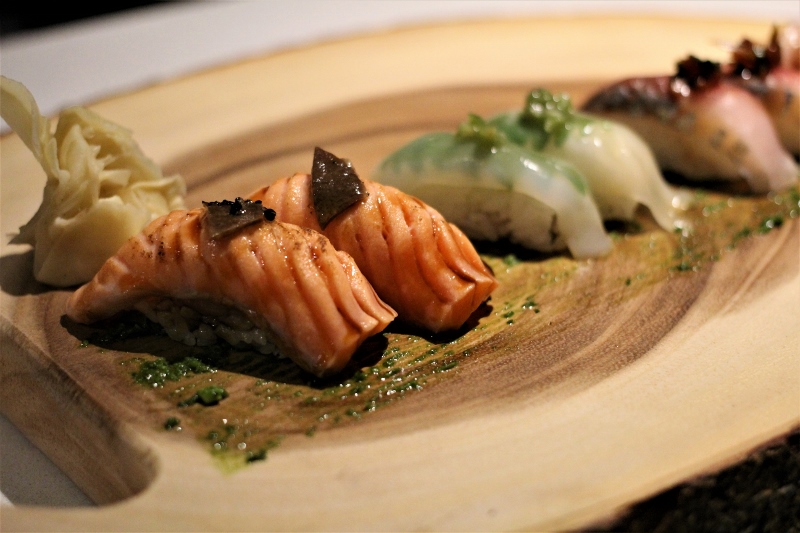 My favourite (no surprise here) however was the King Salmon Nigiri with Black Truffle. The salmon was melt in your mouth, slightly aburied, and topped with a piece of actual black truffle. If you are going to try the nigiris here, make sure you order this one. 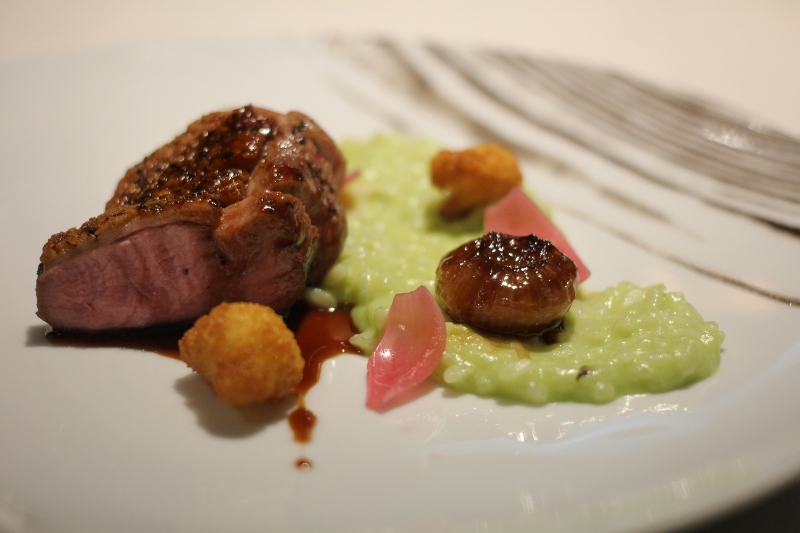 Bringing in a stronger flair of French cuisine, they did a Duck Breast dish with wasabi edamame risotto, balsamic cippolini onion, panko crusted cauliflower, and cranberry sauce. While Meta Knight thought it was only okay, I found it enjoyable. 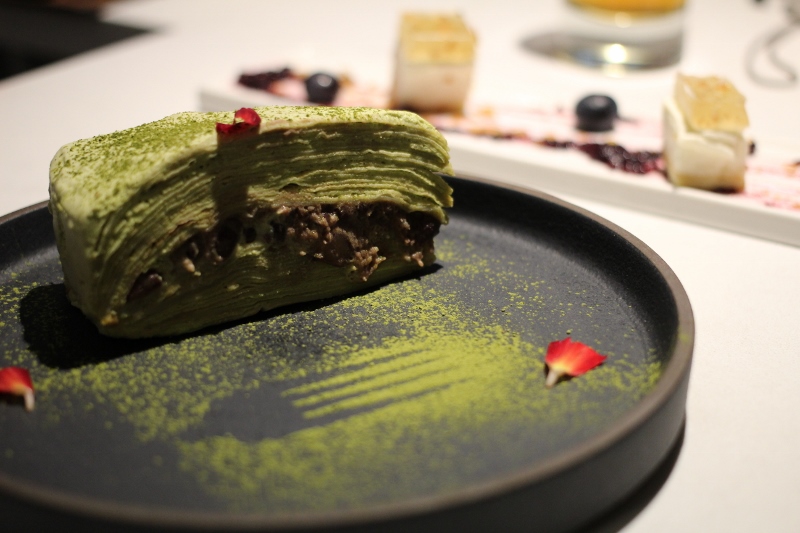 Their red bean filled Matcha Mille Crepe was a nice way to end of the meal and it was executed well. I appreciated the extra sprinkling of matcha powder, and that gorgeous fork silhouette makes it look oh so sophisticated. 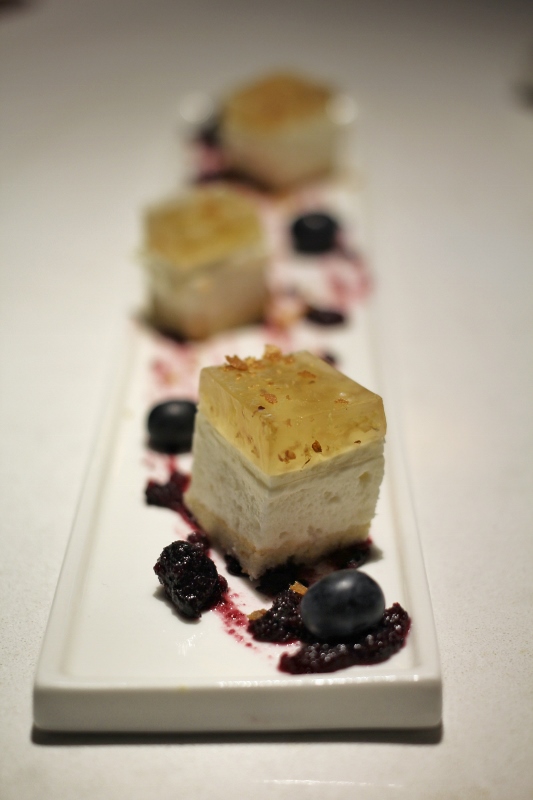 We also really enjoyed the Osmanthus Jello probably because we’re Asian and this type of dessert is common in Asian cuisine. But what we liked most about the dish was the pairing of flavours and textures between the blueberry/blackberry sauce, the Osmanthus jello, the panna cotta, the lychee mousse, and the sponge cake.

All in all, Kitchen by Yugo is trying something new by serving food that is unique and inspired by both Japanese and French cuisine. Even though they’ve only been open for 6 weeks, during my 2.5 hours at the restaurant, I saw at least 5 groups of people look into the restaurant or check out their menu so the curiosity is there. I think there’s a good future for Kitchen by Yugo and I wish them a great first year of success!

*Disclaimer: I was invited to a media tasting at Kitchen by Yugo. All food and drinks were complimentary. All opinions are my own and were not vetted by the restaurant before posting. 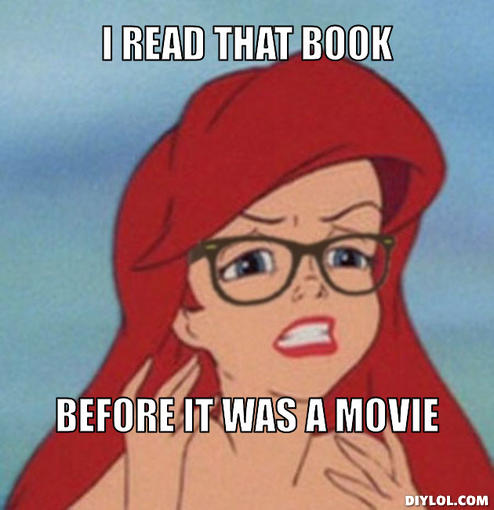 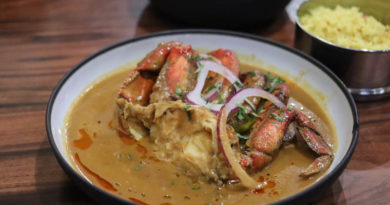