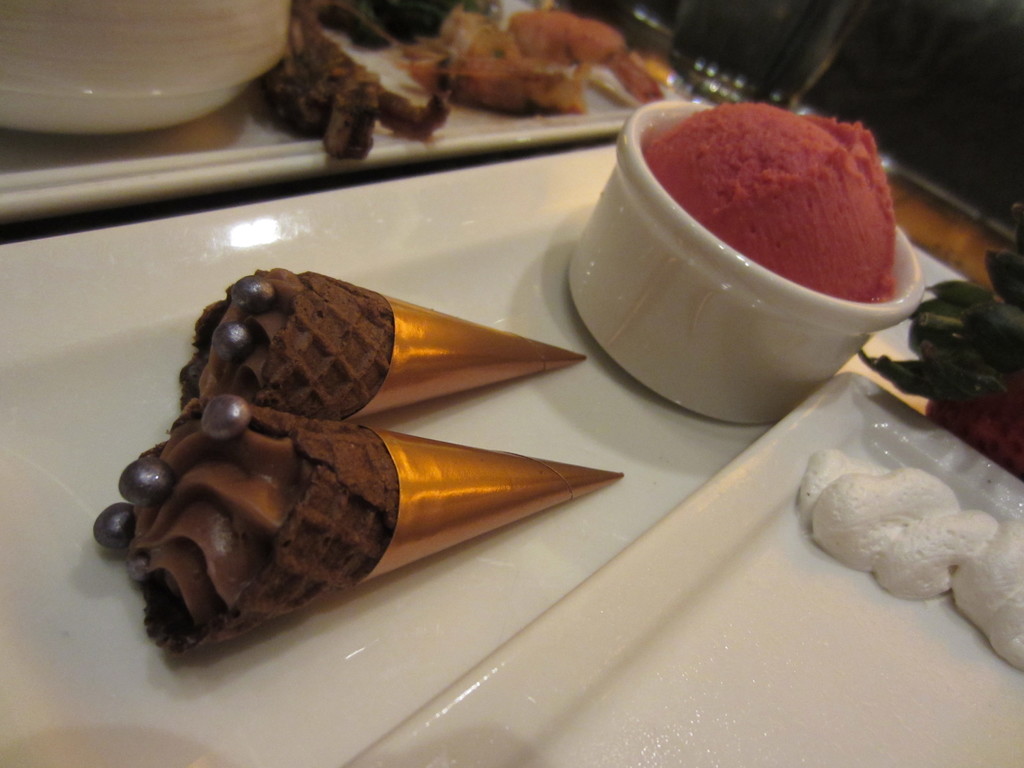 I feel a little bit sad writing this post
because it reminds me of the failed expectations Meta Knight and I had when
trying Wicked Spoon Buffet located in the Cosmopolitan hotel. 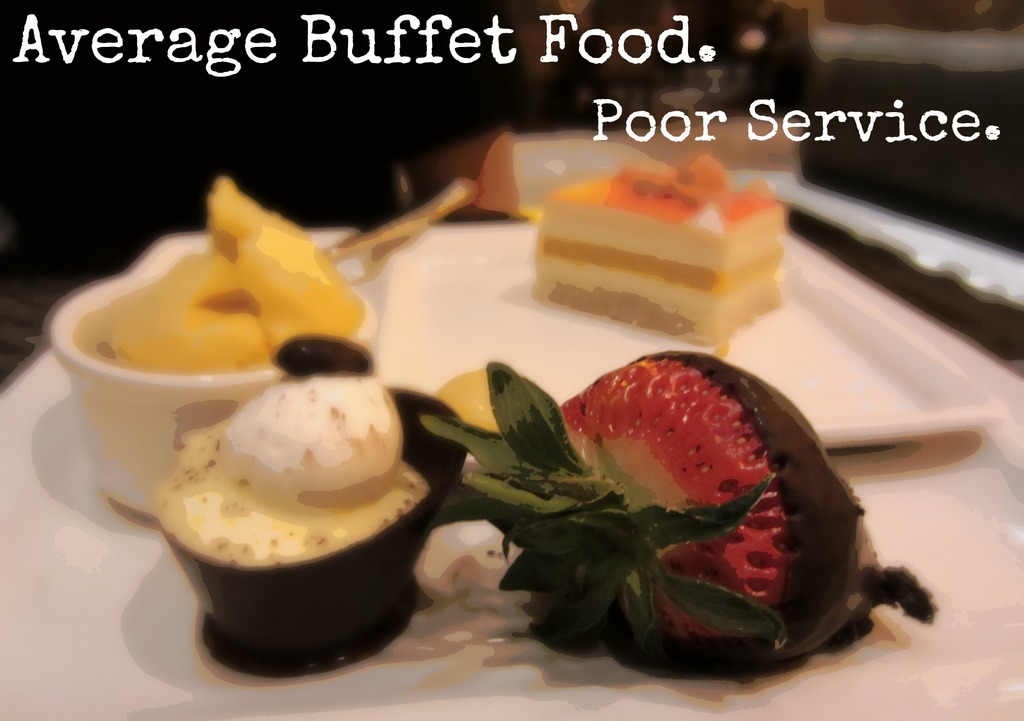 However, I don’t want to deter any of you
away from trying this place out because they are quite unique in that they
serve individualized portions in a buffet. It makes for prettier presentation
and avoids the awfully dreaded spooning and digging of the ‘best piece’ of
salmon in the tray. 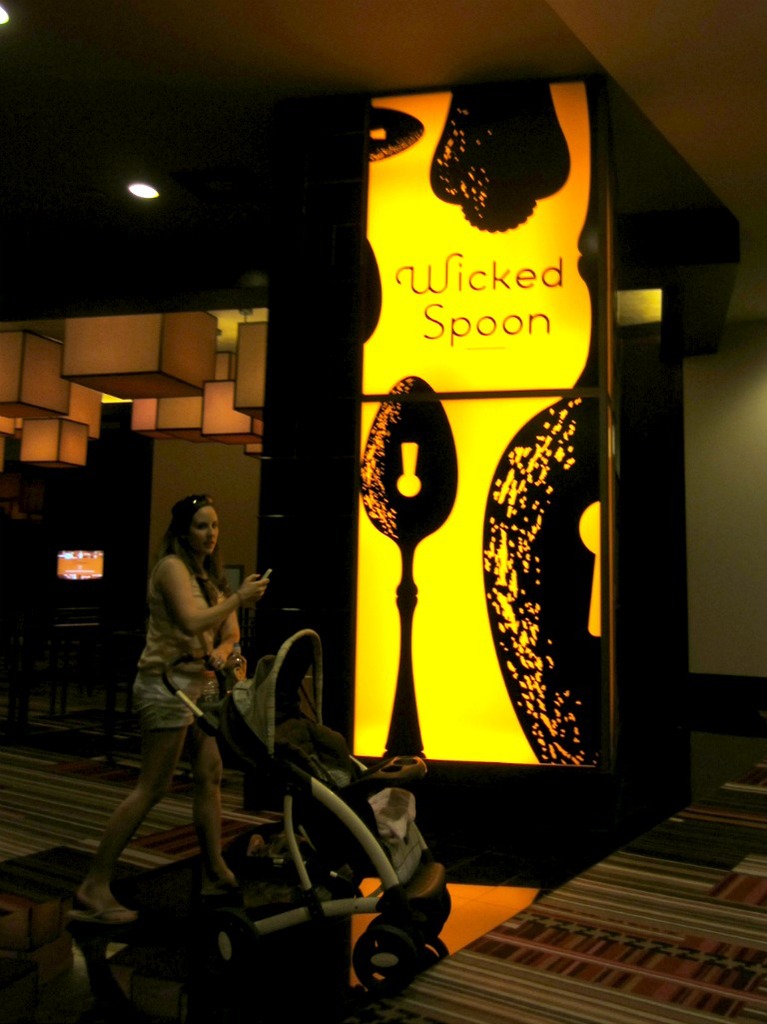 We came during Easter weekend so they jacked up their prices to
$45 for dinner service. After taxes, we paid almost $100 for two people so we
had some pretty high expectations for this buffet.

Their salads were all pre-made and
portioned into little cups which made it easy for people who don’t like to make
their own salads. I on the other hand enjoy the DYI (do-it-yourself) salads but
unfortunately, there wasn’t a salad bar in sight. I was instantly disappointed
because I have never encountered a buffet without a salad bar… 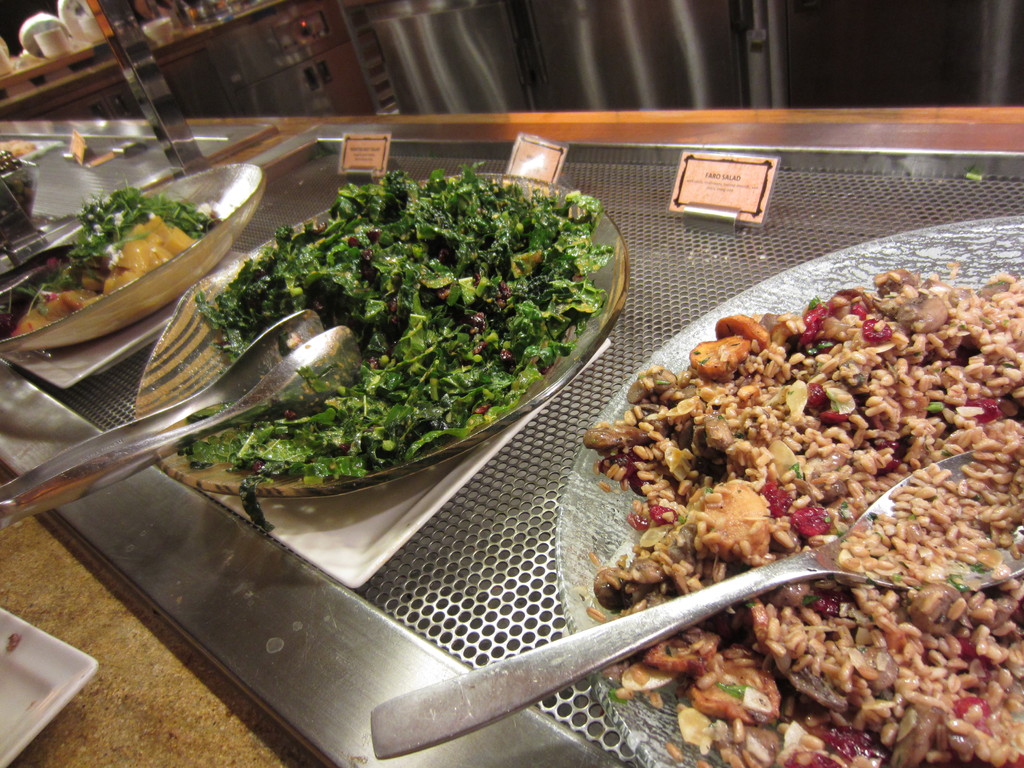 Some other premade salads including a Kale
Salad and an Orzo Salad. 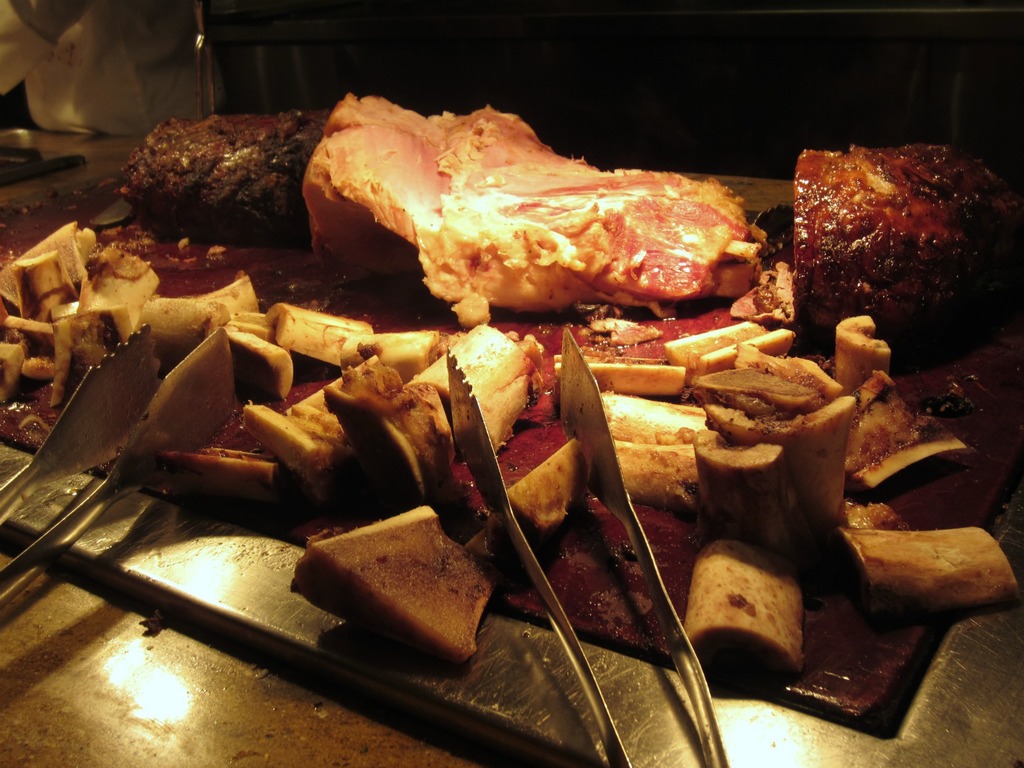 One of the cooler items they had on their service was Bone Marrow.
Once again, the bone marrow tasted like meat fat which I absolutely was not
fond of so I can’t really judge whether it was ‘good’ or not. 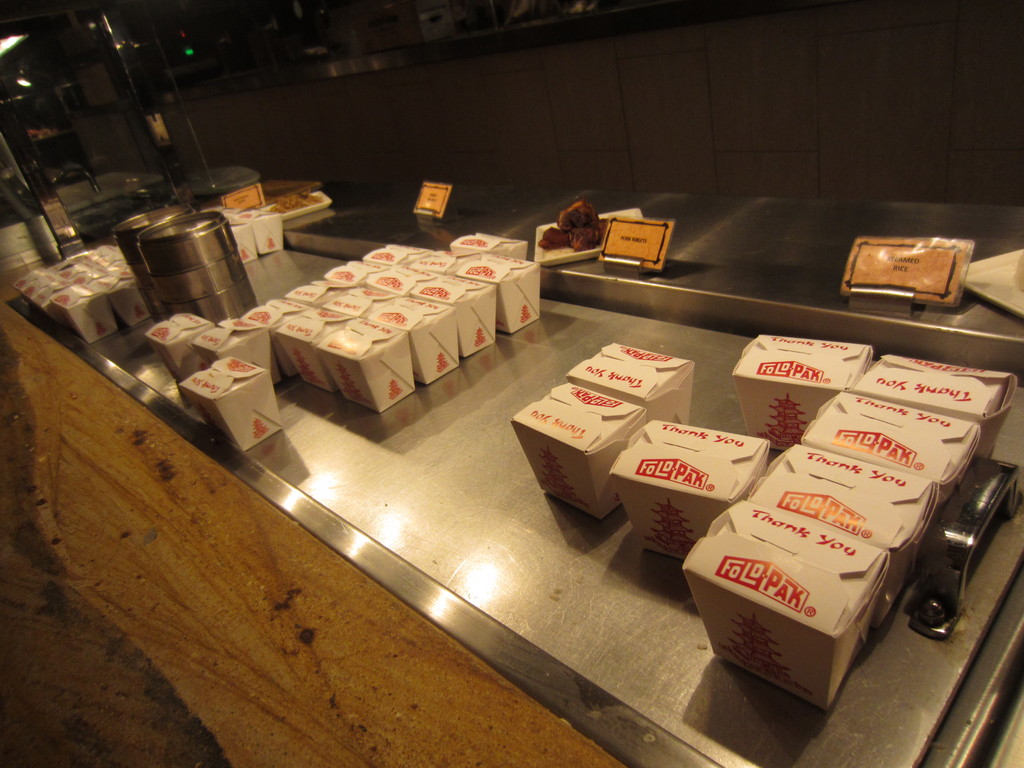 Hehe. They had cute stereotypical Asian takeout boxes in the
Oriental section. Very cute idea. I can imagine little kids getting a kick out
of these. 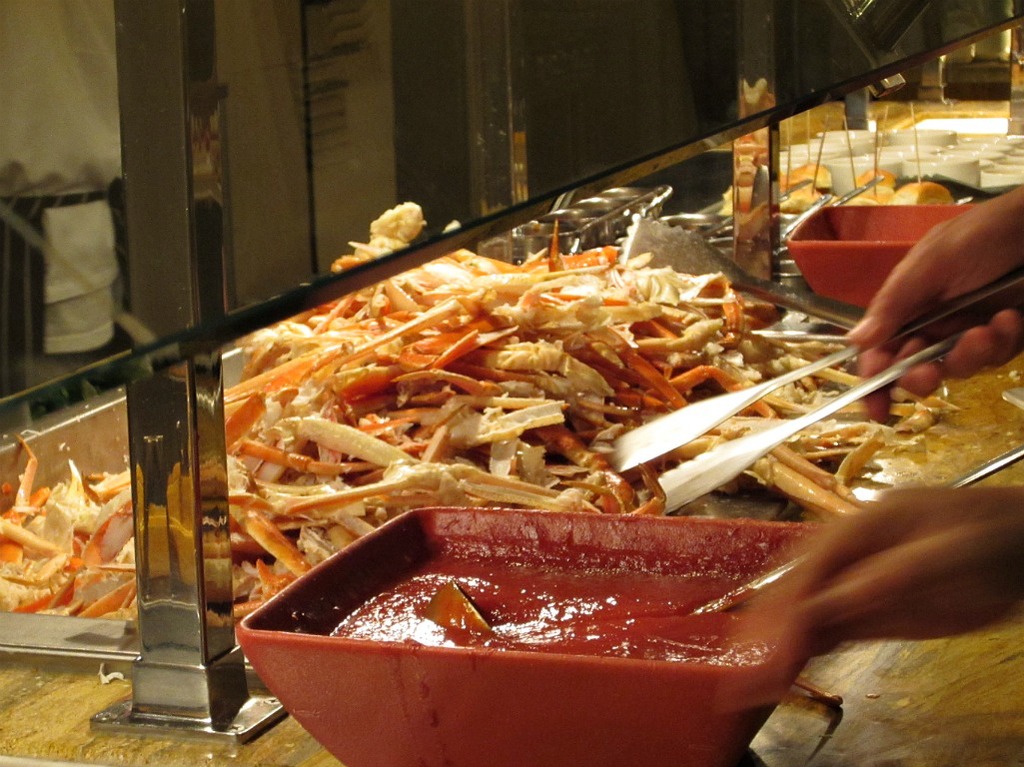 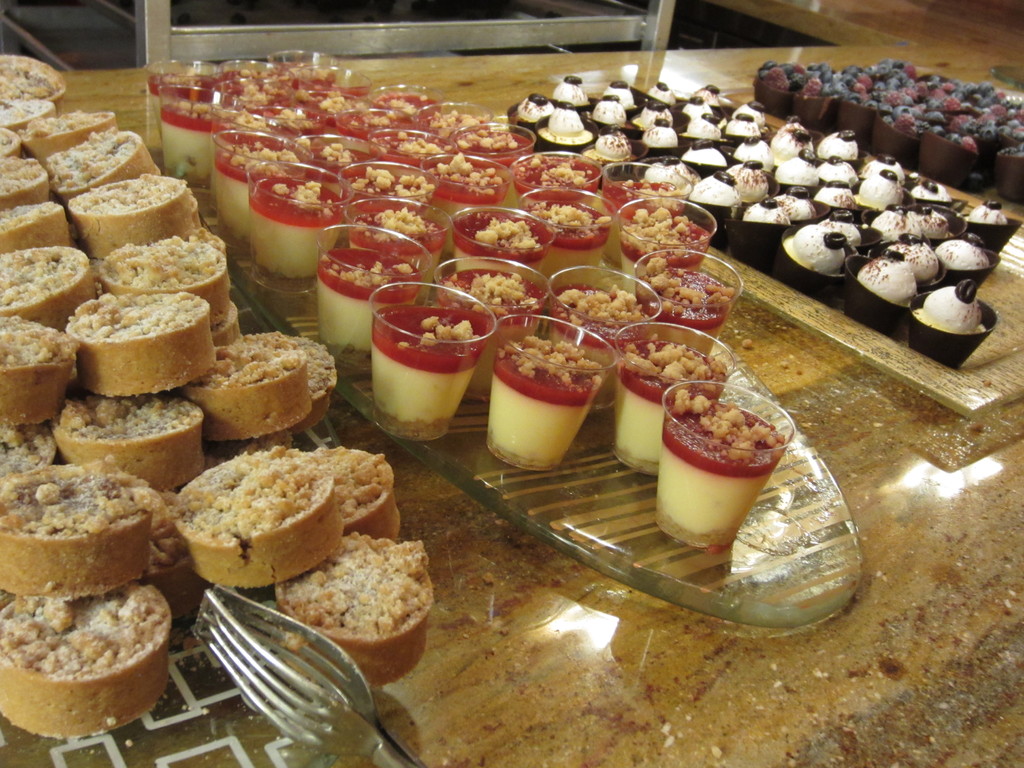 None of the desserts looked too appealing except for a few. 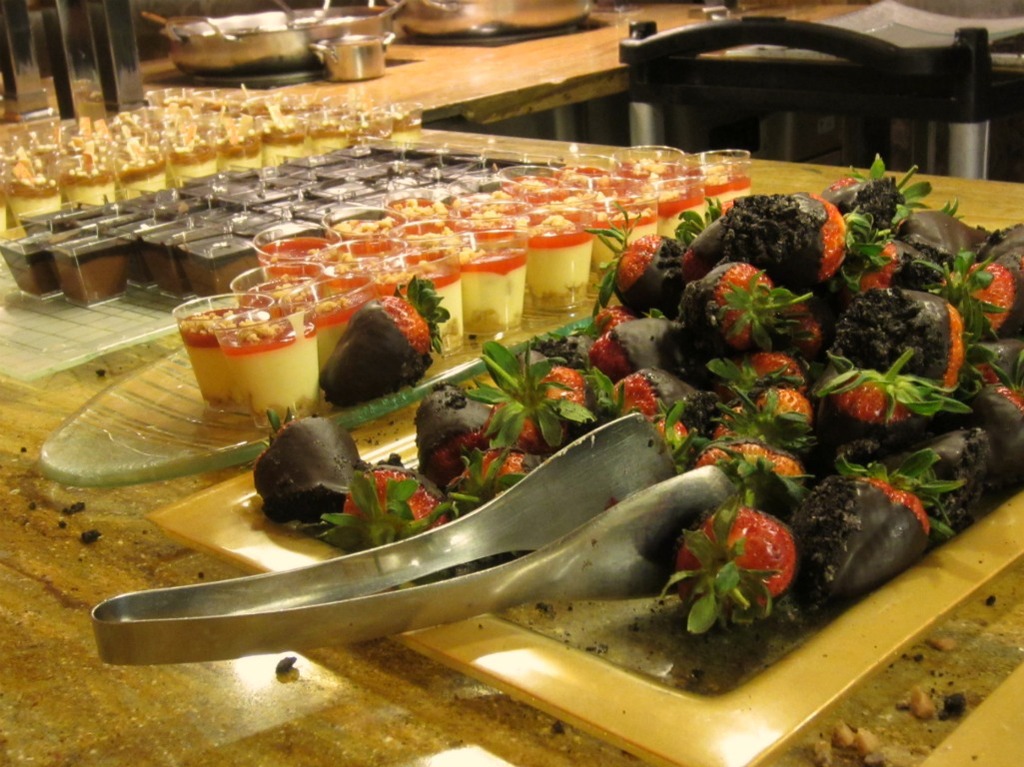 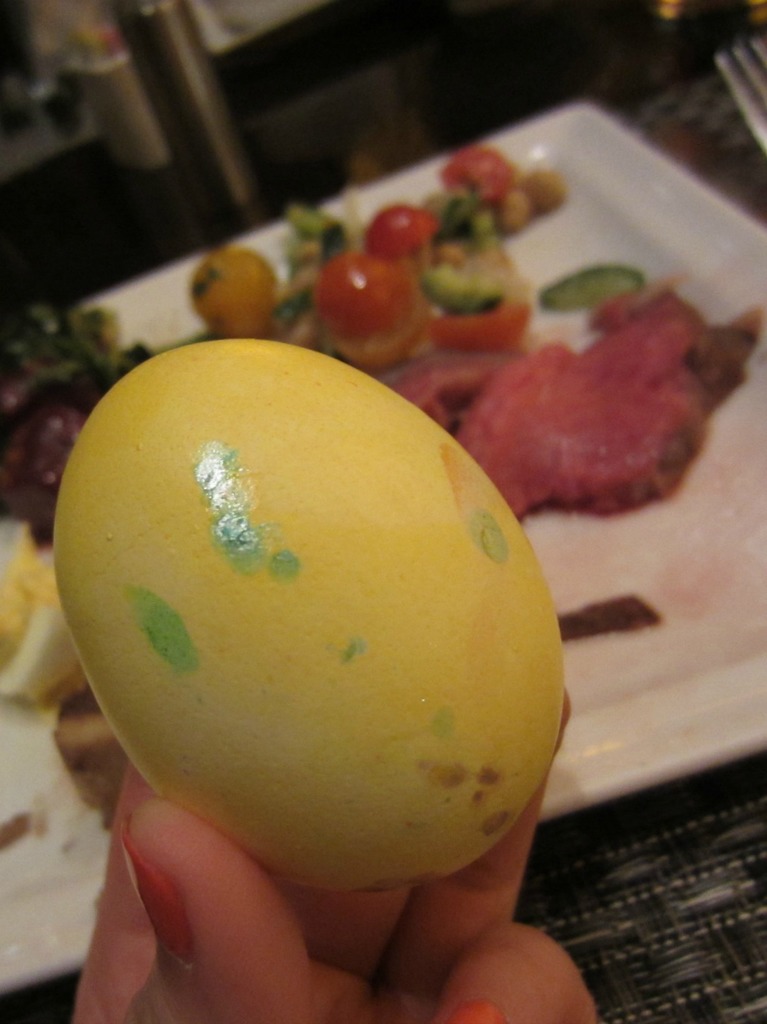 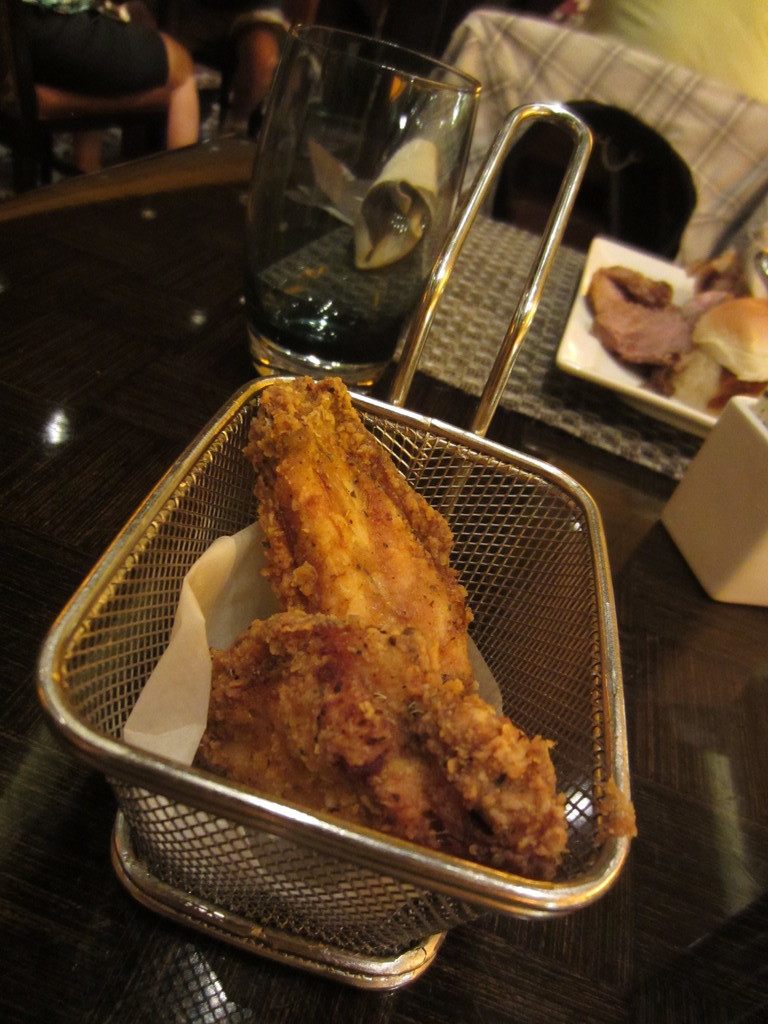 (left) In celebration of Easter weekend,
they had some cute painted eggs for you to eat. (right) They served Fried
Chicken out of mini fryer lookalikes which I thought was incredibly clever and
appealing. 😀

The Sloppy Joe Sliders as well as the
Salmon filet were both alright and nothing too special. 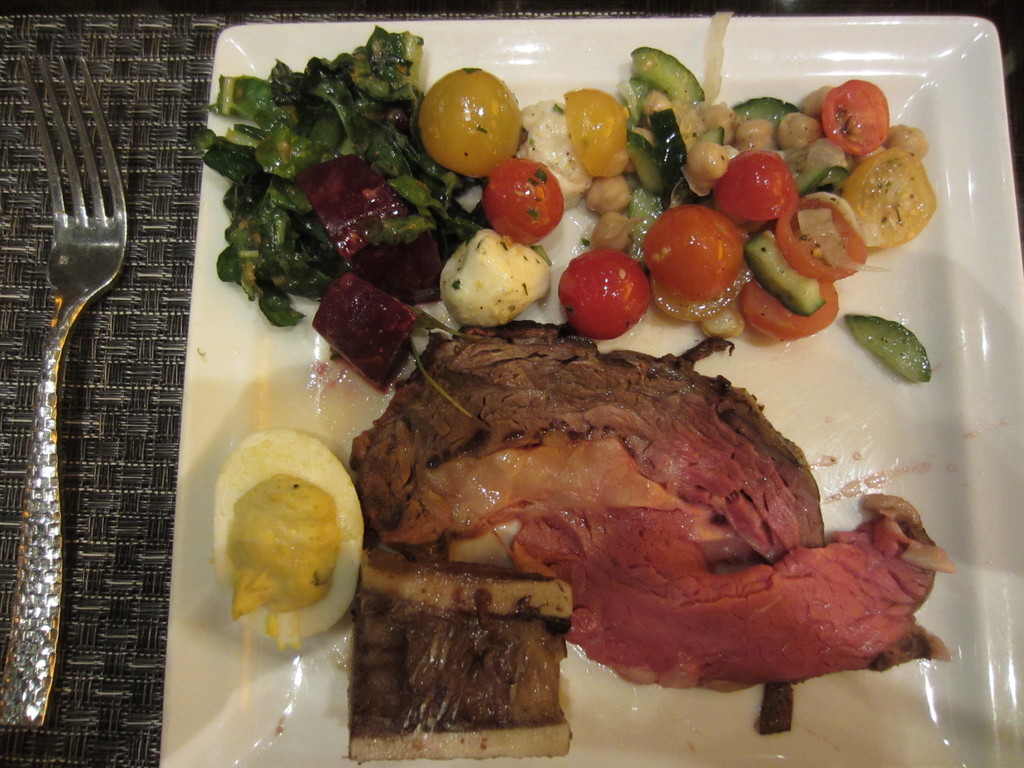 Attempting to start off healthy, I chose a variety of salads and
veggies including kale salad, roasted beets, baby tomatoes with bocconcini. The
bocconcini cheese was one of the freshest mozzarella cheeses I’ve had
which was surprising considering this was a buffet. 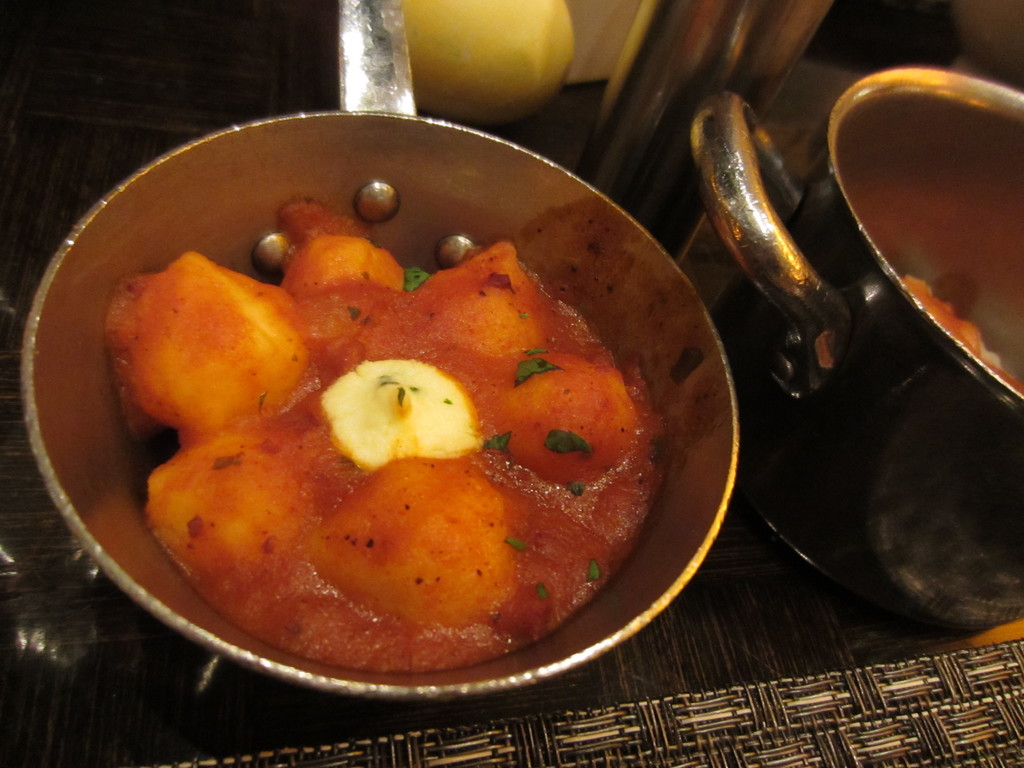 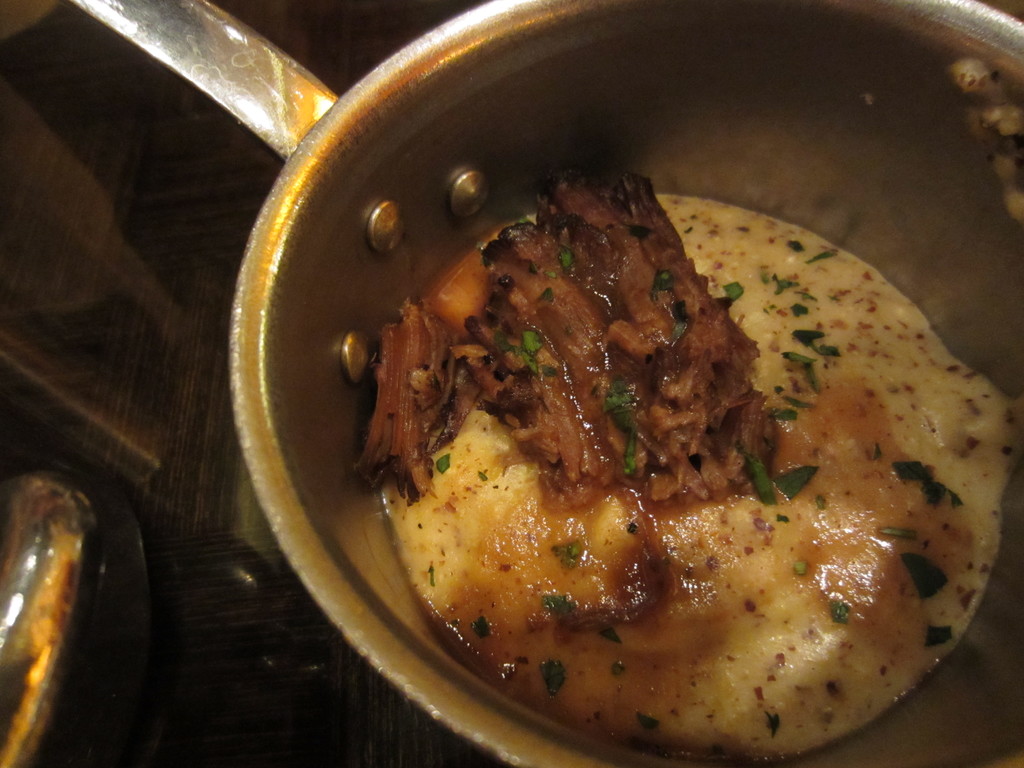 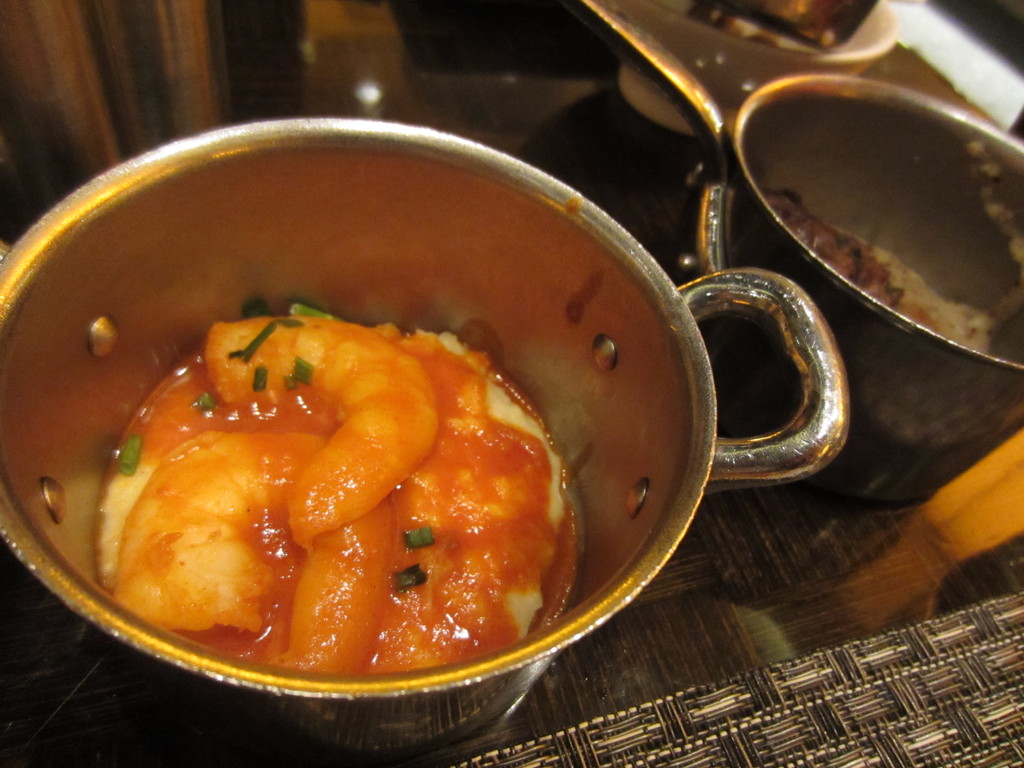 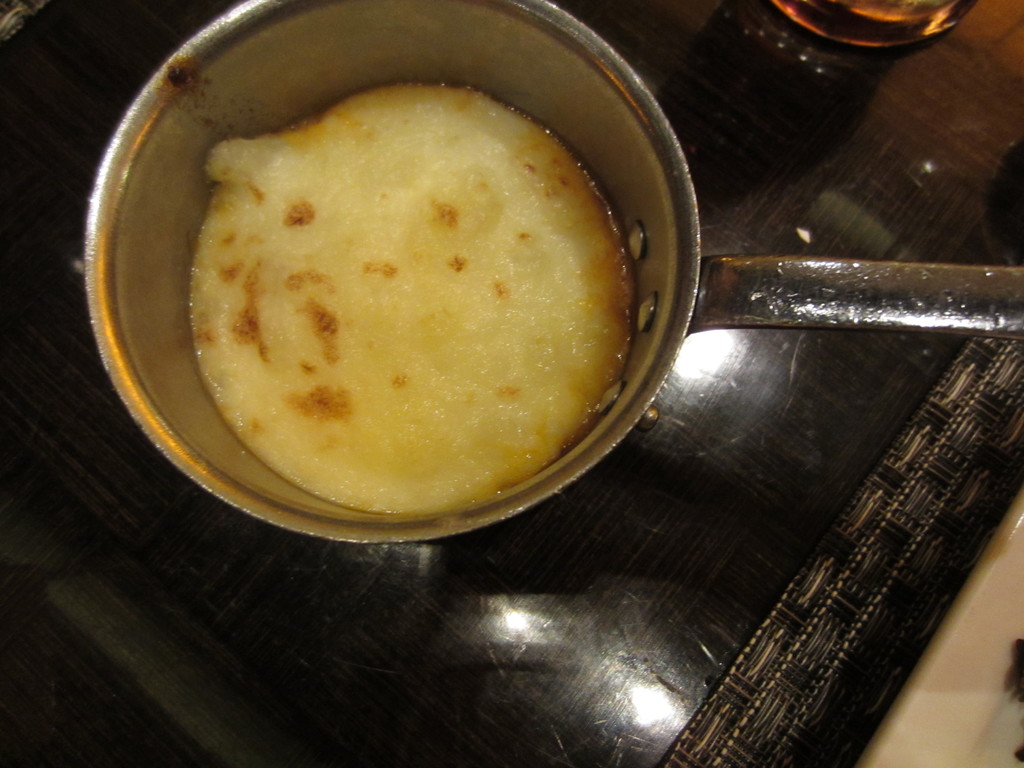 Shrimp and Grits!!! (top) and Shepard’s Pie (bottom). The shrimp
and grits were probably one of the better dishes in the buffet because it had
the perfect balance of spicy (from the shrimp) and cool (from the smooth
grits). 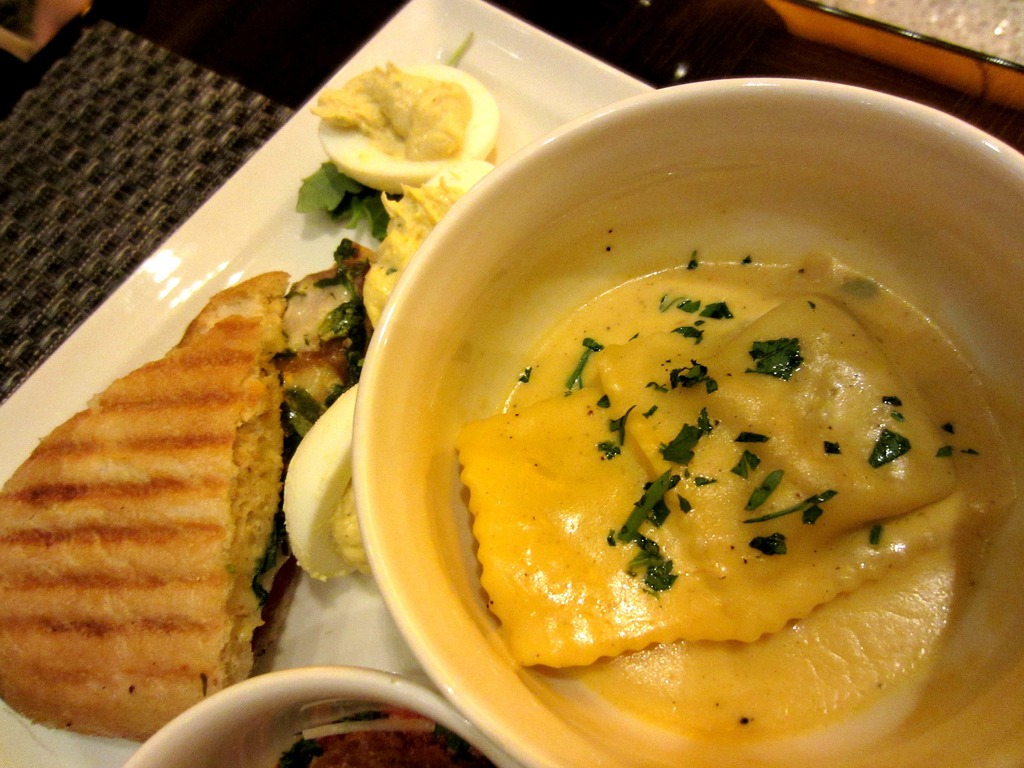 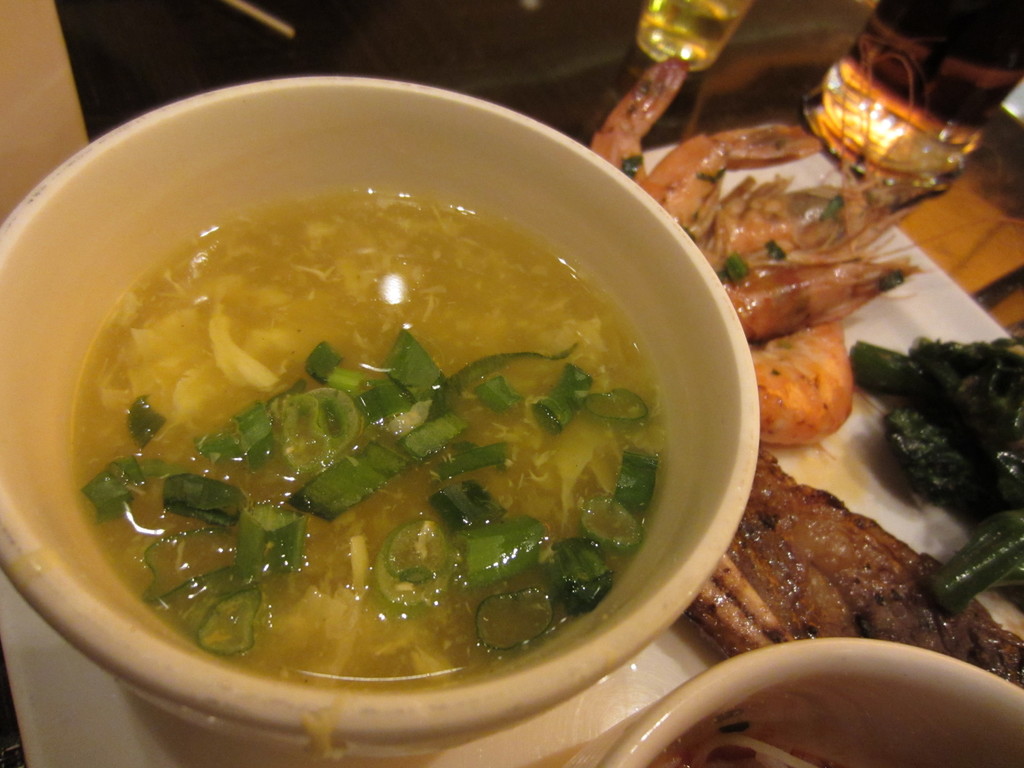 I am a big sucker for Asian Egg Drop Soup and while it is extremely
easy to make, they did a pretty good job here. 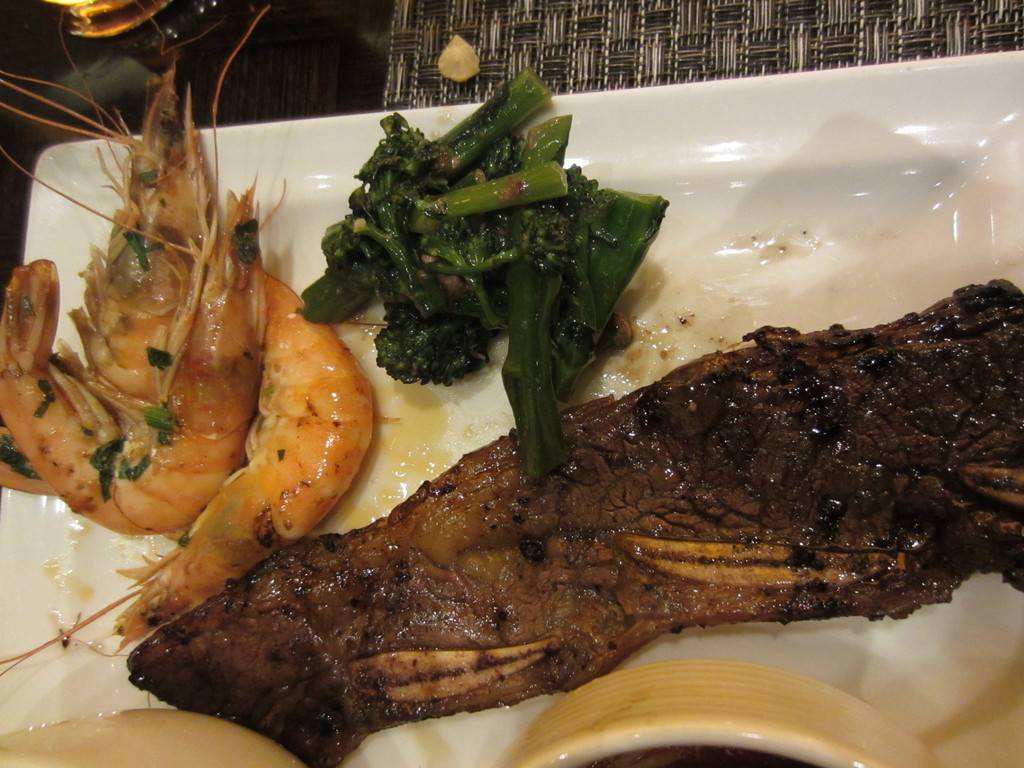 I absolutely would recommend getting (ample amounts of) Korean BBQ
ribs. These short ribs were marinated in the traditional bulgolgi sauce and
grilled. ABSOLUTELY SCRUMPTIOUS. My biggest regret was finding out these ribs
existed when I was 95% full already. 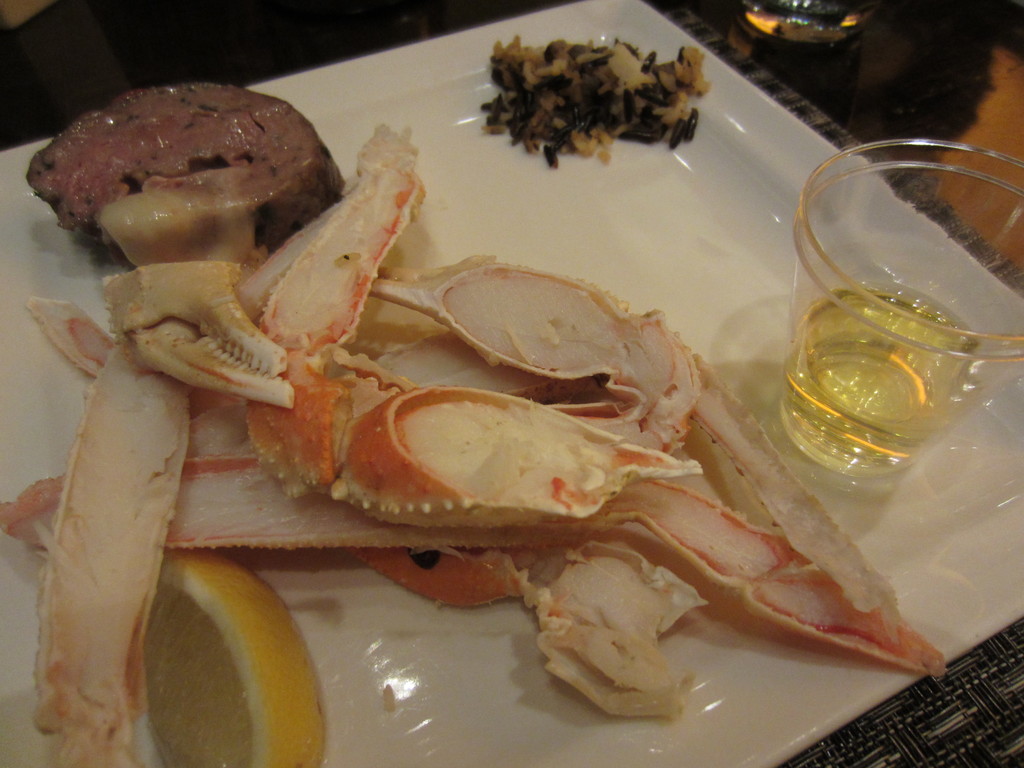 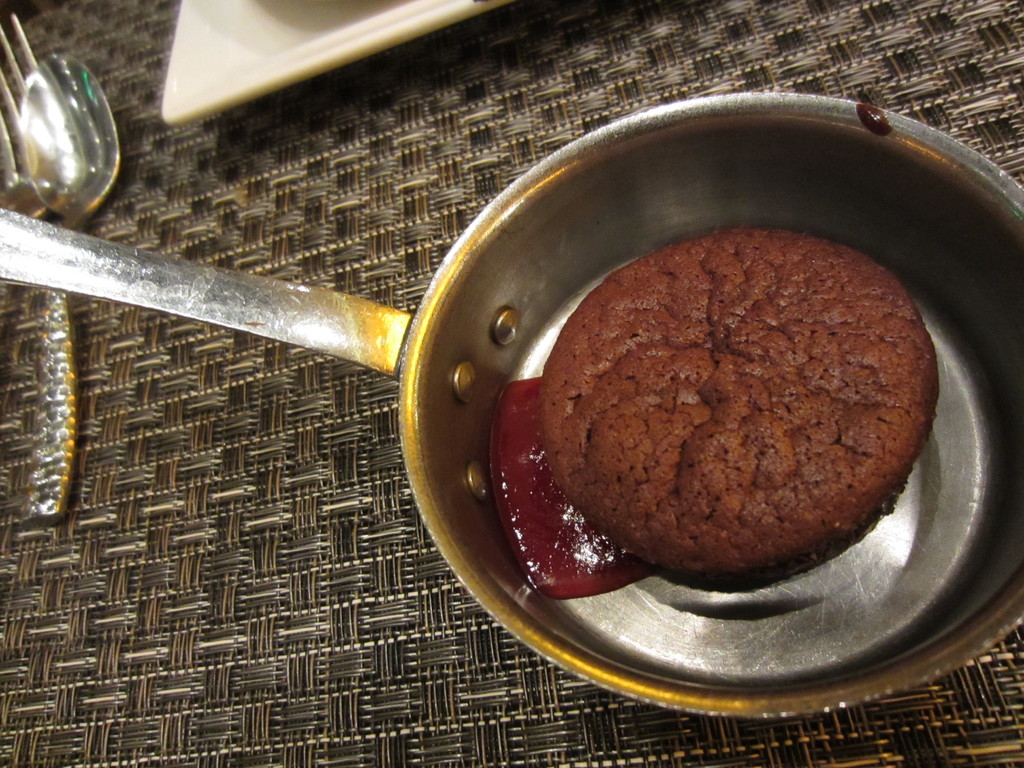 Their Chocolate Lava Cake with Raspberry Coulis is a skippable
dessert. The beautiful stream of chocolate that was suppose to flow lusciously
from the center did not happen. 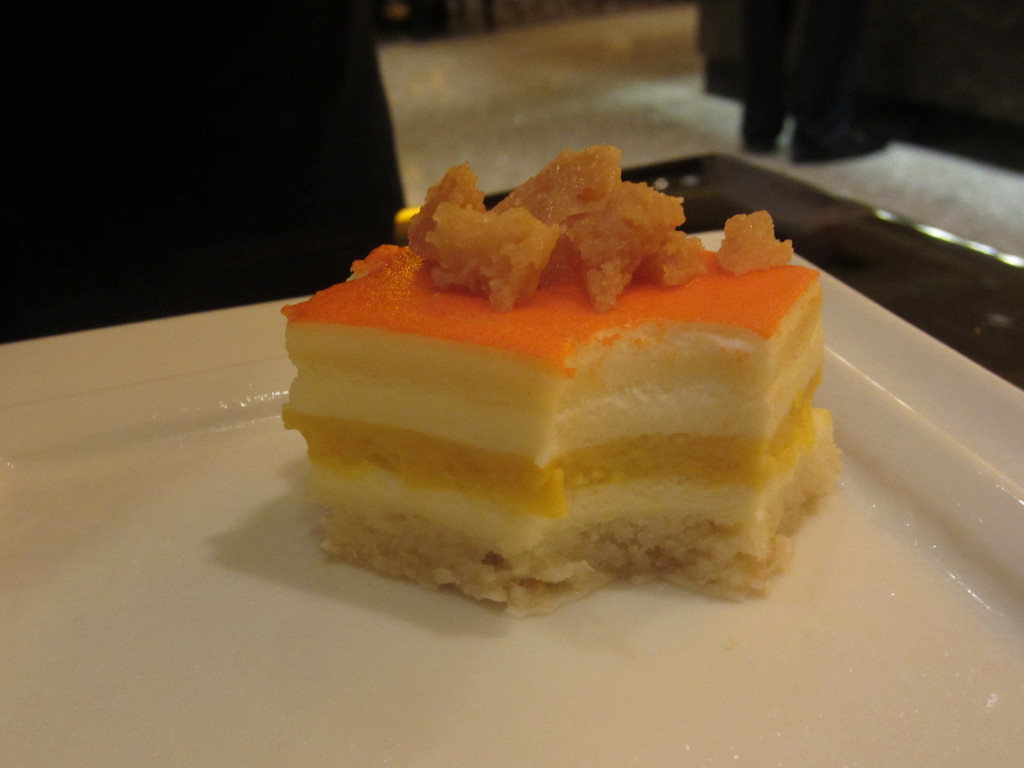 GET THIS DESSERT. It is called White Chocolate Mousse with Exotic
Cream. We both still have no idea what exactly is in this dessert but it was so
freaking delicious that we had at least three. The ‘exotic cream’ (tasted kind
of like mango passionfruit puree) was to die for.

While these little tiny chocolate cones looked absolutely
beautiful, they tasted like styrofoam. I’m sorry but these were stale and
completely inedible. 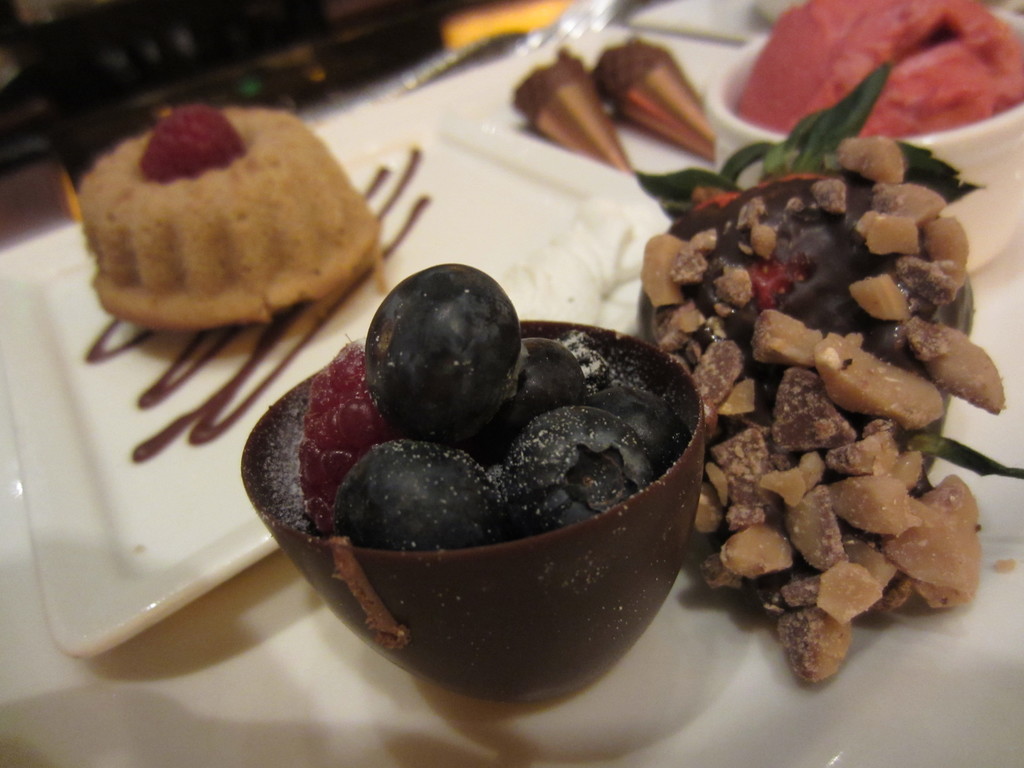 So here is the
story about the service: We were assigned a server for the evening
who was in charge of taking care of our drinks and dishes when we were finished
with them. The server not only did not pick up any of our dishes. to the point
where we had three dishes stacked on top of each other just lying on our
already small table, he did not come to see how we were doing or if we needed
anything. We tried flagging him but he refused to look our way, catering only
to the other tables in his section. After a good 10 minutes of trying to flag
him down, we had enough. Meta Knight had to physically find him, walk up to him
and tell him to clean up our table. I thought that was completely unacceptable
and it honestly ruined both of our experiences at the buffet from then on.
All in all, Wicked Spoon buffet is decent for lunch or dinner but
just don’t expect any gourmet fine dining options. 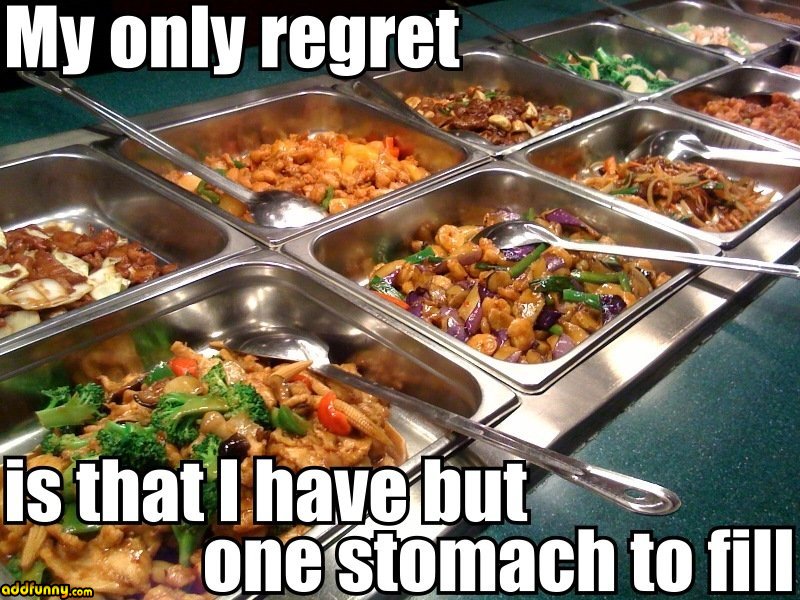 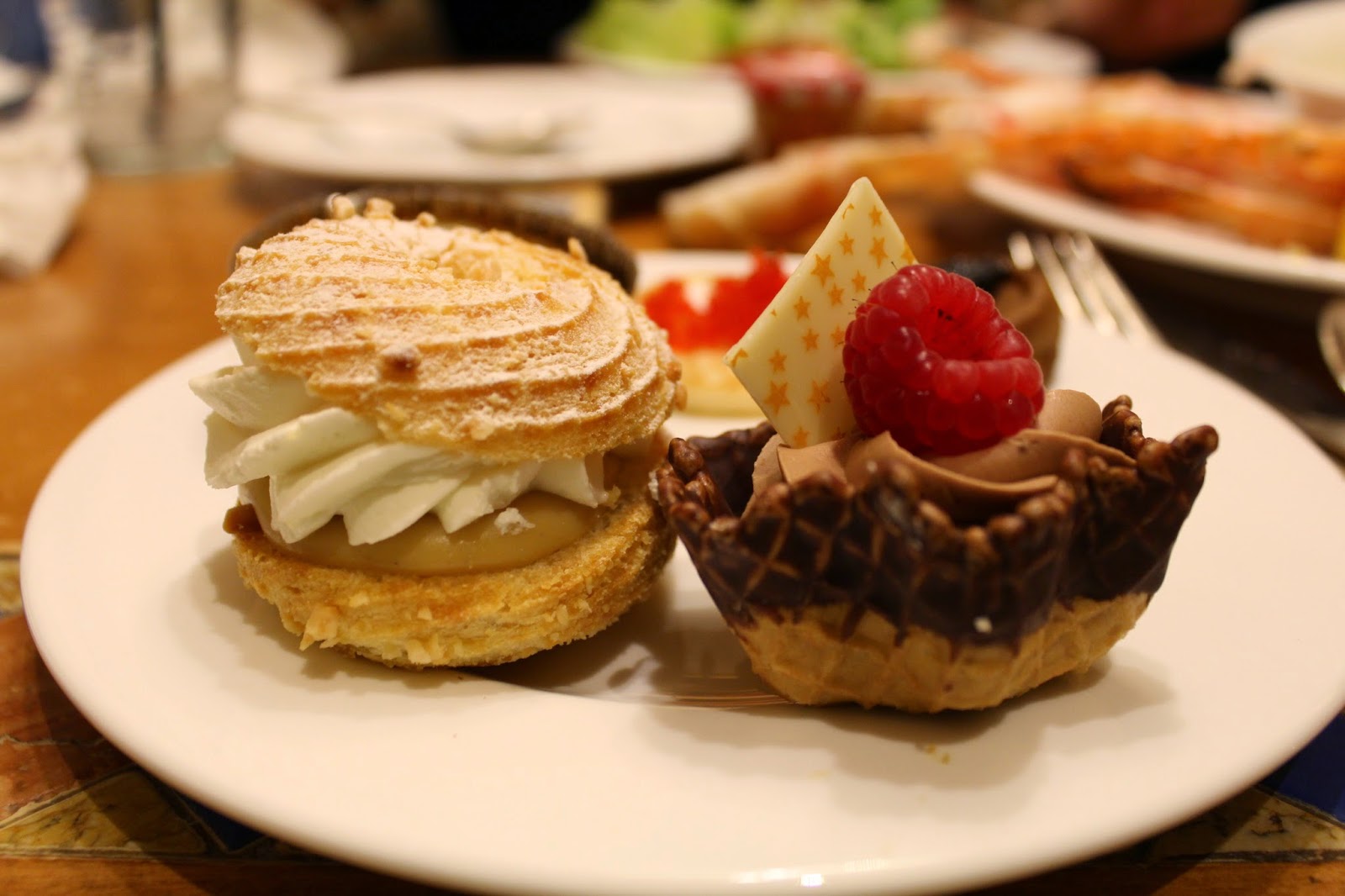 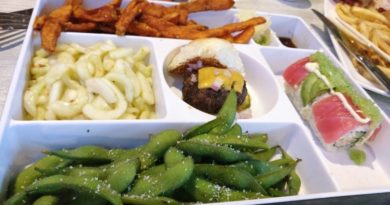