Dirtygirl, Tea, Hungrygirl, and I decided to high tea at Meloty to catch up and do some girl talk. We originally decided on Faubourg or Adonia, but since the reviews on them weren’t that great, we decided to come to Meloty instead. 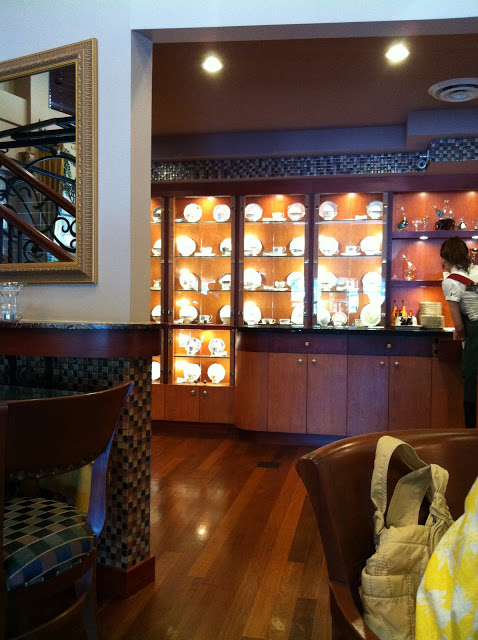 It is located in Richmond and in the same plaza as Bubble World and Richmond Sushi. Meloty doesn’t look that fancy from the outside, but it was gorgeous inside. Their bathroom especially, looked so beautiful! Not even kidding.

All of us ordered the Deluxe High Tea ($25.00) which is from 2-5pm only and it consists of all-you-can-eat pastries and desserts as well as one pot of tea per person. The teas were good but none really stood out for me. 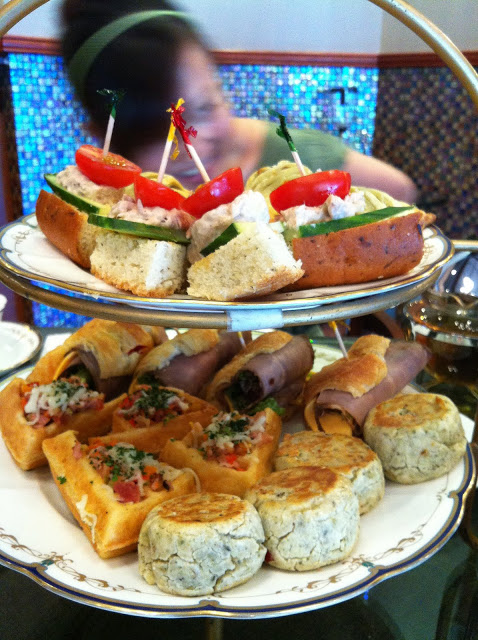 The first part of the high tea (the savoury pastries) came in two tiers. I gotta admit, these were nicely presented and all the pastries looked so good that I didn’t know which one to begin with! 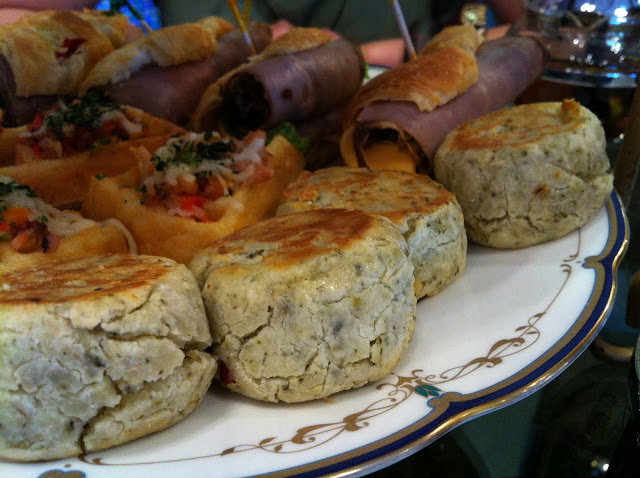 We asked the waitress what kind of scones these were, but they just replied “they’re scones”. =.= Based on the taste, I feel like these are spinach scones. They were served warm and these were just soooo good!!

If you spread a bit of butter, let it melt on the warm scone, then take a bite.. oh my god… it’s divine..I clearly got seconds =.= (morning workout erased right there). I feel like they pan fried these scones after baking them which gave them the nice golden colour on top and the crispy/flaky crust .

These were mini pizza waffles. They tasted pretty good but the waffle was a tad too soft. 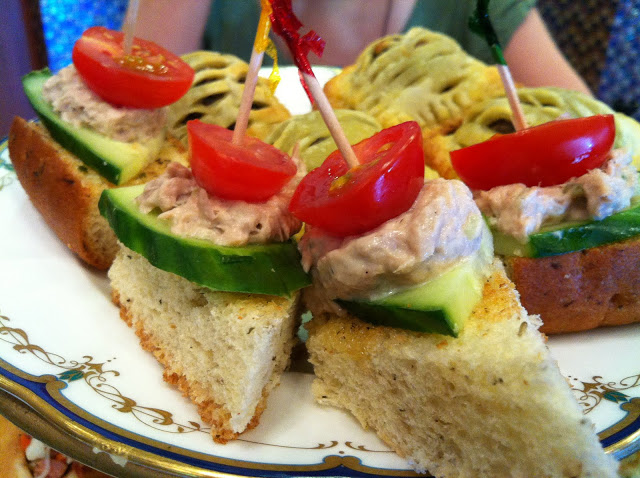 The tuna cucumber sandwich was okay. They used focaccia instead of white bread which was nice. 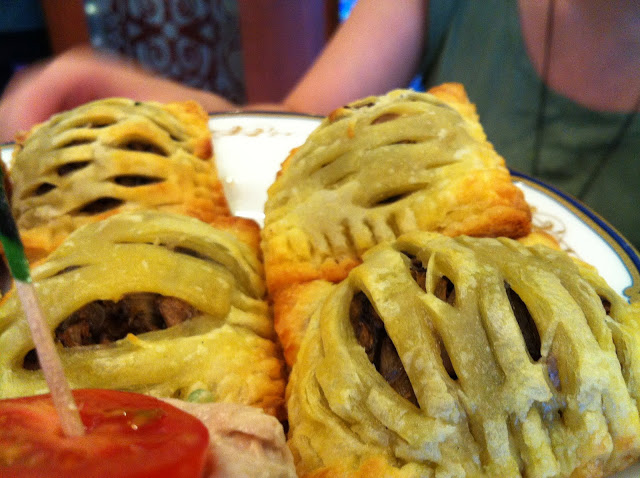 Oooo.. These mushroom turnovers were so delicious! The sauteed mushrooms were perfect in flavour and the puff pastry was soft and flaky. The only downside was that the pastry was a bit too oily. 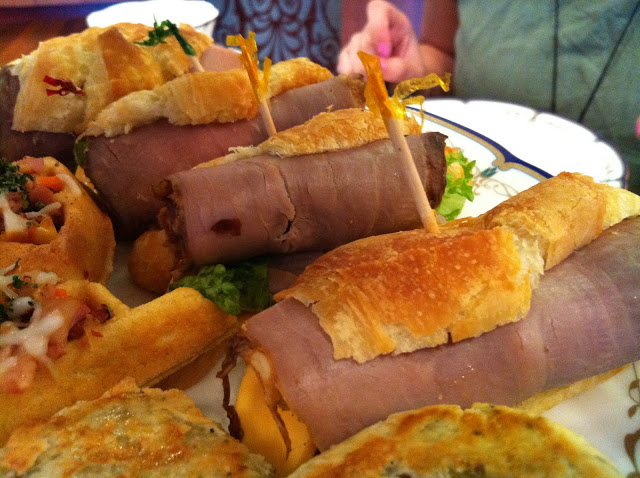 The mini croissant sandwiches had processed cheese, roast beef, and salad greens in them. These were delicious as well. I would have liked the cheese melted and not processed though. Gosh.. with all these flaky crusts and buttered goodness, maybe all-you-can-eat was a bad idea. 😛 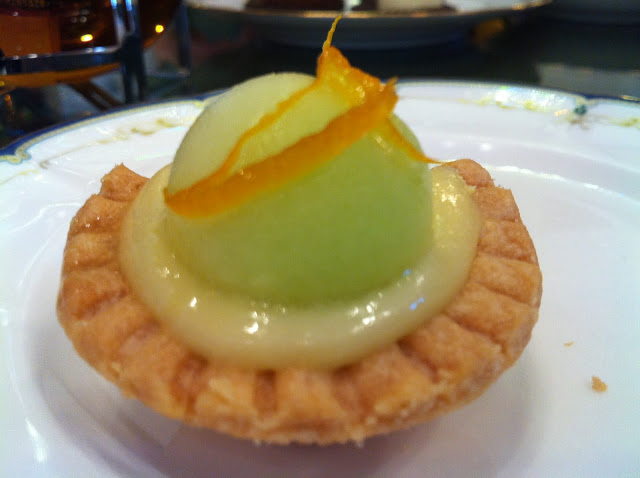 After we were done our second helping of the savoury pastries, we moved onto the desserts. MUAHAHA. First came the fruit tart. It was light and had a citrus-y tasting custard. 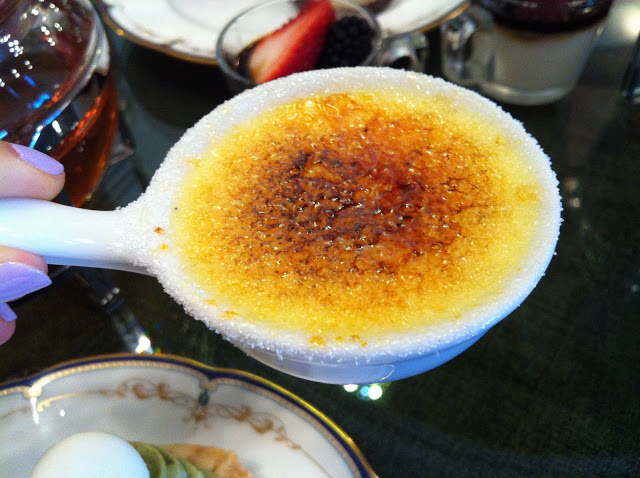 Next was the creme brulee. It came in a mini spoon and I had at least two to three of these. They weren’t magnificent or anything but they weren’t bad either. I still prefer Hart House and Wynn Buffet’s creme brulee though.

One thing I noticed was that they used white sugar to caramelize the top which is weird because I always thought you are suppose to use brown sugar to give it a bit more caramely flavour. Also, because they only torch the custard area, bits of granulated sugar sit on the rim of the spoon just waiting to give you sticky fingers when you pick it up to eat it.

The left is some kind of blueberry chocolate cake and the right is a chestnut cake. Both of them were not very good. The cake was dense and not airy at all. 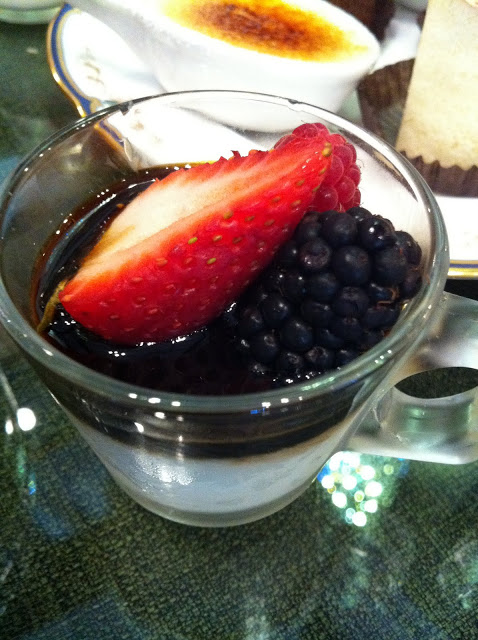 I believe this is a panna cotta with coffee gelee or syrup on top. The gelee/ syrup is quite bitter in taste but it gives you a nice kick of coffee.

The mango panna cotta was quite refreshing. We all liked it and ordered a few more of these. The little jars that it comes in is so cute! 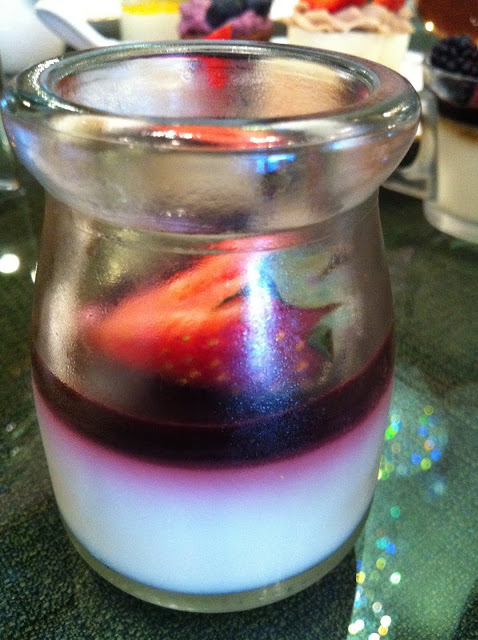 Here is the blackberry panna cotta. 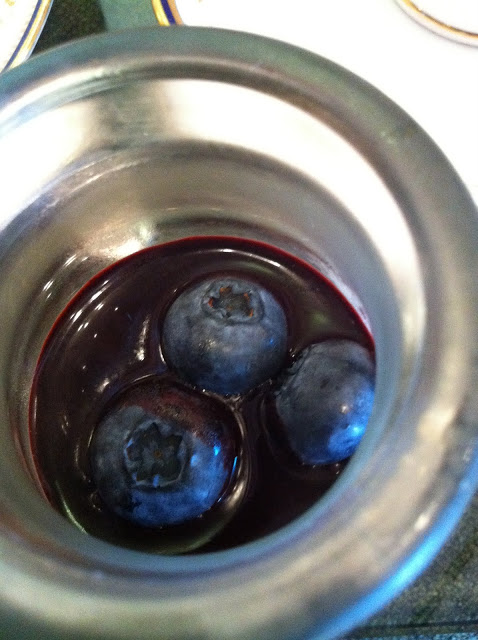 This is the blueberry panna cotta. I liked this one the least of the panna cottas. 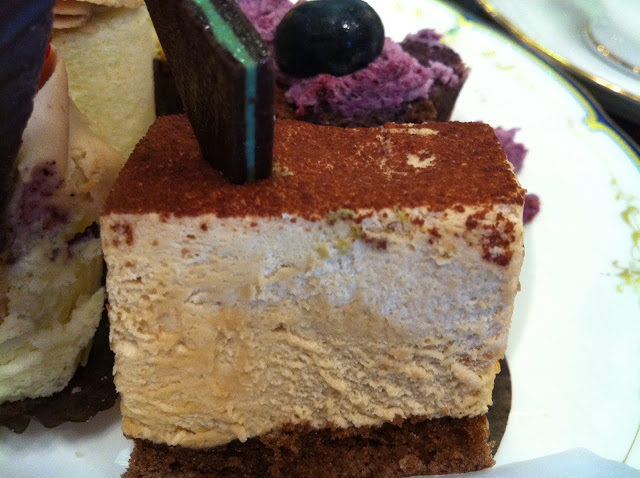 The tiramisu was not good. No distinct coffee taste and I couldn’t see any ladyfingers in it. I had a bite and that was it. 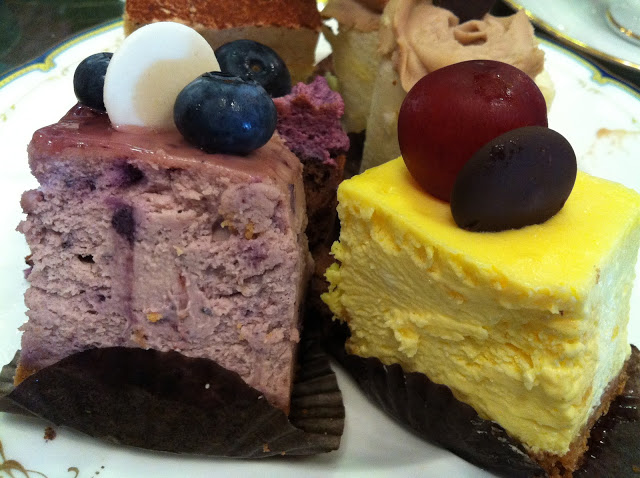 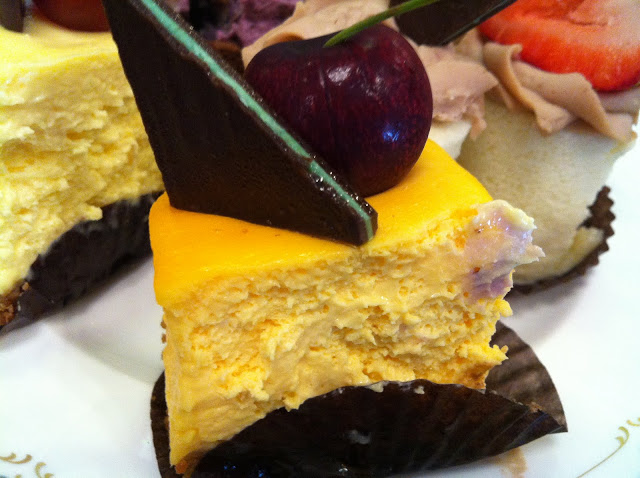 This is the mango cheesecake and it was alright. Honestly, by the time I got to tasting the mango cheesecake, my stomach was so full and bloated that I probably couldn’t even comprehend what I was eating. All-you-can-eat is dangerous people!! Especially when it comes to mini delicious pastries and desserts! 😛

High tea-ing at Meloty was a surprisingly pleasant experience. Even though the pastries and desserts weren’t all perfect, I actually liked it more than the ones from Fairmont Vancouver hotel.  I am still on the hunt for the best place to high tea. Any recommendations? 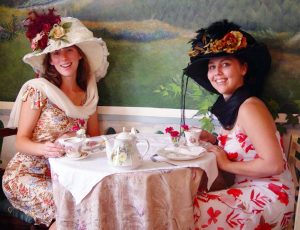 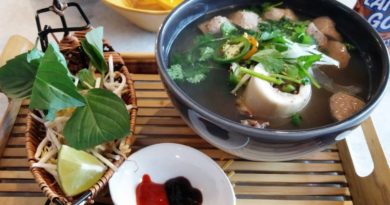