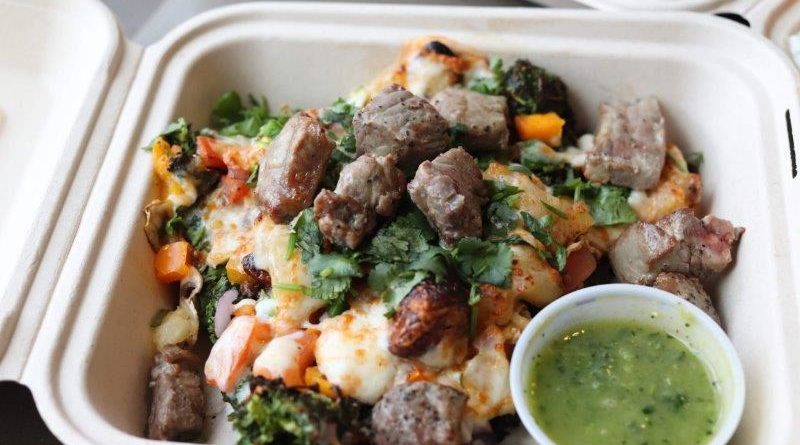 I don’t normally wish to live in downtown but if I did, the only reason would be so I can eat at Caveman Cafe every day. Caveman Cafe is located inside International Village (or the old ‘Tinseltown”) and they are a paleo, keto, vegetarian, and vegan friendly restaurant with some really amazing eats.

I first came here a few years ago and I called it a hidden gem in my blog post. To this day, I still consider this a hidden gem as it’s not all over Instagram and still I find many people have not heard of it. 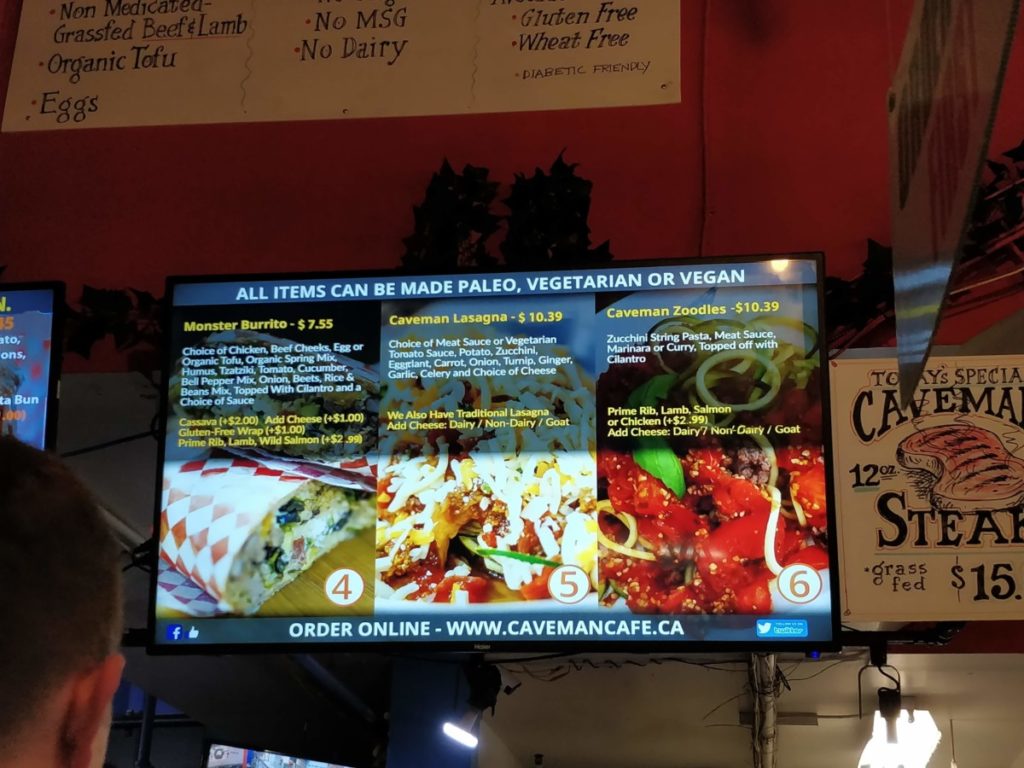 The thing I like most about Caveman Cafe is that their prices are so incredibly affordable for what you get (bonus points for not having raised the prices year after year like some other establishments!). Their GIGANTIC burritos are only $7.55 and their Caveman Zoodle Spaghetti is only $10.39.

They also make their own sauces which is a nice break from all the other processed mayos and honey mustards out there. My personal favourite is the avocado olive oil. It is so friggin good and tastes so fresh! 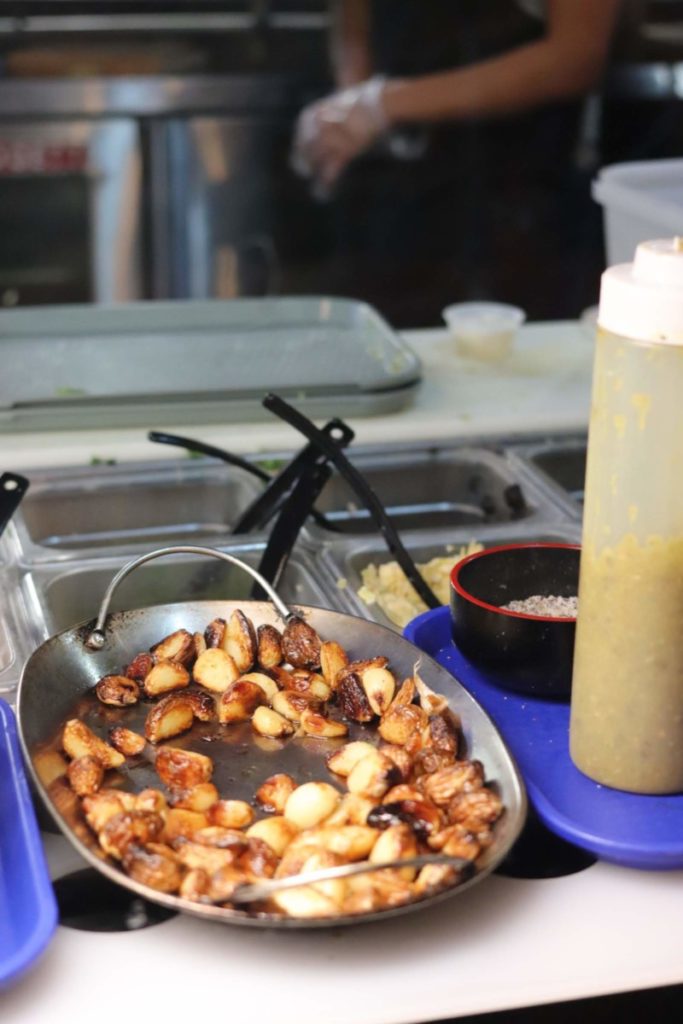 Before I get onto the actual food, I also love how they have WHOLE ROASTED GARLIC CLOVES! I love adding that into my meal and honestly, I don’t know any other place that has this option.

First I got their Veggie Infusion Crust Caveman Pizza with Prime Rib ($9.99 + $2.99). Even though this crust is the least like a real wheat crust (compared to their other crusts made with cassava), it is completely made of veggies so you feel so fantastic eating it.

I like my cheese so I stuck with regular mozzarella but you can opt for one of their homemade non-dairy free cheeses if you are lactose-intolerant or vegan. 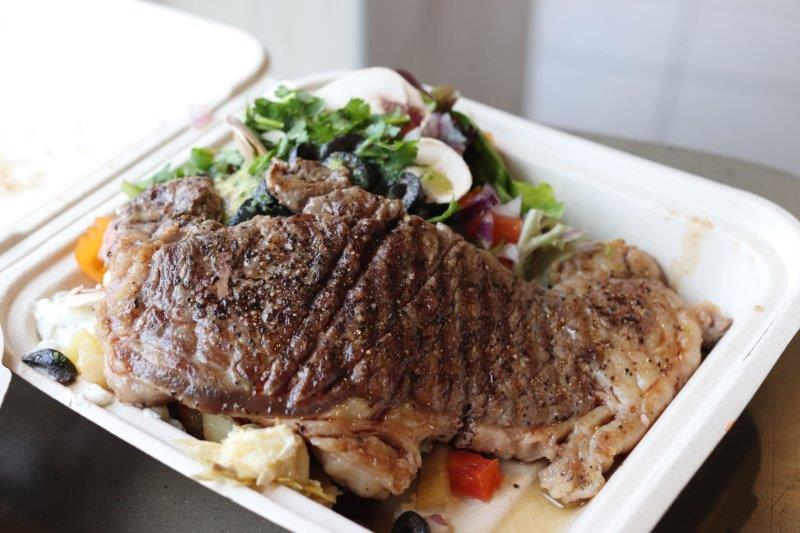 They’re currently offering something called the Caveman Steak ($15.99) and it’s basically a gigantic slab of grassfed steak on top of a salad with all of the veggies that you want. I always, and I mean ALWAYS try to find steak dishes at restaurants that come with just veggies and no potato but they always cost an arm and a leg or they’re dull veggies like all red peppers. I feel like with this amount of meat, you can easily share this between two people and just add a pizza on the side.

Last but not least is their Caveman Zoodles ($10.39 + $2.99 for extra prime rib) and this is the real winner of the bunch, even though I love them all. The zucchini noodles are covered in a meat sauce, and topped with mozzarella and prime rib cubes. For under $15, I don’t mind just ordering this any time I want zucchini noodles instead of going to the grocery store and trying to spiral these babies myself! 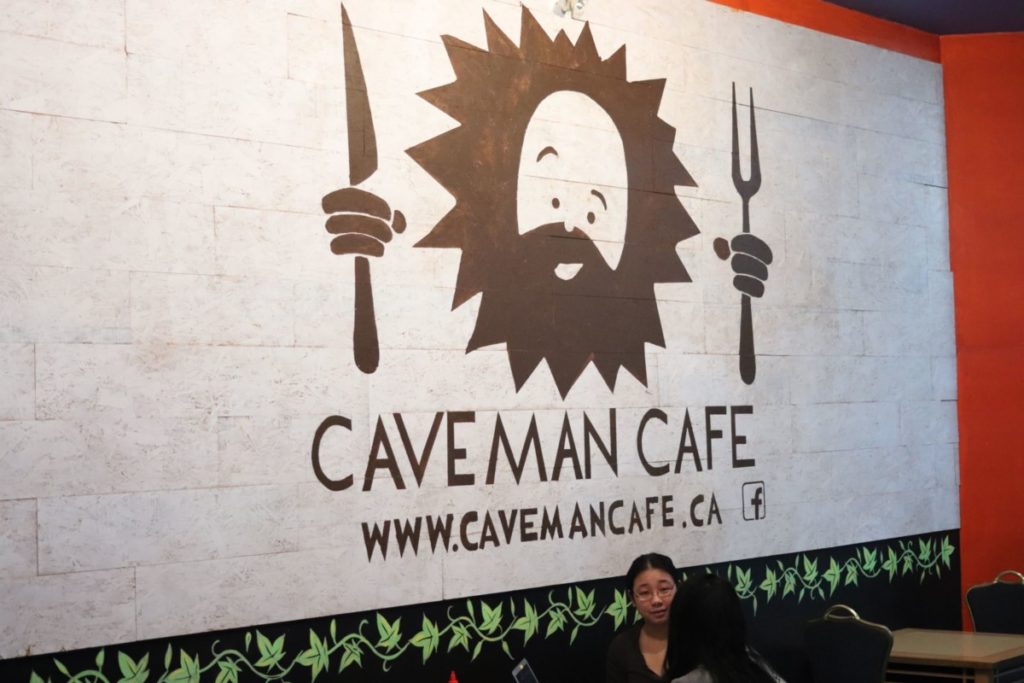 All in all, I would highly recommend Caveman Cafe for anyone looking to decrease their carb/wheat/dairy intake and eat a little healthier. Again, if I could eat here three times a week, I would. Pit Barrel Cooker / Pit Barrel Smoker – read full review at Cookerism.com. Pit Barrel Cooker is an awesome ugly drum smoker and we have no problem backing it 100%. And we’re not the only ones who feel this way; the PBC checks most of the boxes per Amazing Ribs list of things to look for when buying a smoker. It comes with almost-zero assembly required, is simple to use, and perfectly capable of holding a consistent temperature thanks to the ideal 30-gallon drum design. If that’s not enough, it’s American made by Veteran family-owned and operated team, who’s just as serious about great tasting BBQ as you are. It’s just so friggin delicious, healthy and affordable! What more can you want??

For those of you who are vegan, they actually opened up a sister restaurant called Vegan Cave and they serve vegan pizzas! Once I pay them a visit, I’ll be sure to let you know how it is!

I went to @blackriceizakaya for the first time a f