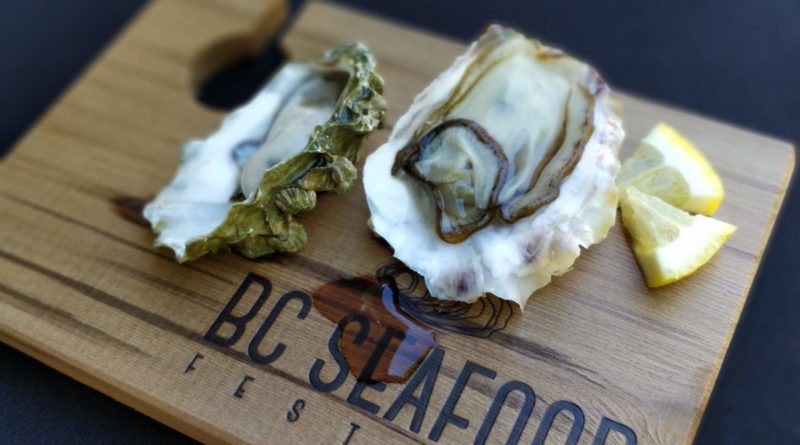 If you have been following my food adventures for a while, you probably know that I covered the BC Seafood Festival last year (if you haven’t, you should check out my recap here). It was a truly insightful experience as I’ve always been a seafood lover, but have never taken the time to learn about where it comes from, how it’s harvested, and how it affects our world and environment. 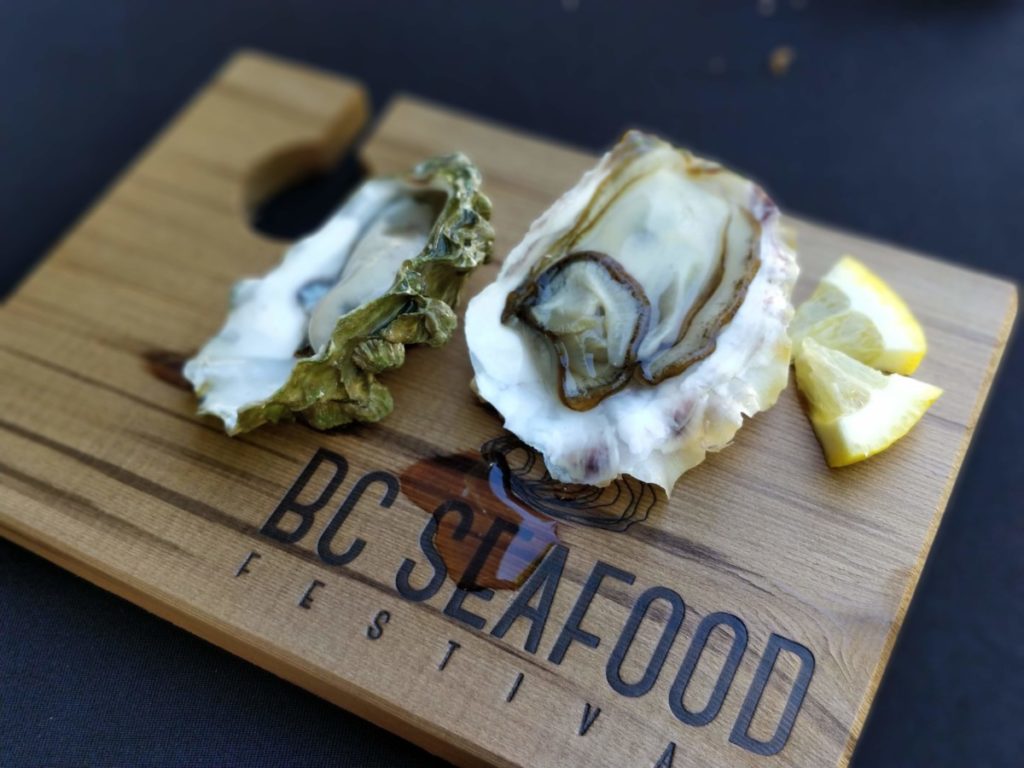 I was fortunate enough to be able to go again this year and I noticed the BC Seafood Festival has changed quite significantly from the years before. This year they focused on large festival-like events, award winning seafood and shellfish tastings, celebrity chef demonstrations, interactive & educational displays, and a tickets-based food and drink system throughout the Signature Weekend (June 16-17).

Below is an overview of what to expect (to eat!) if you’re planning to attend the BC Seafood Festival in Comox Valley!

West Coast Wild Scallops made an appearance with a booth on both days offering some delicious wild scallops caught on the west coast of BC. 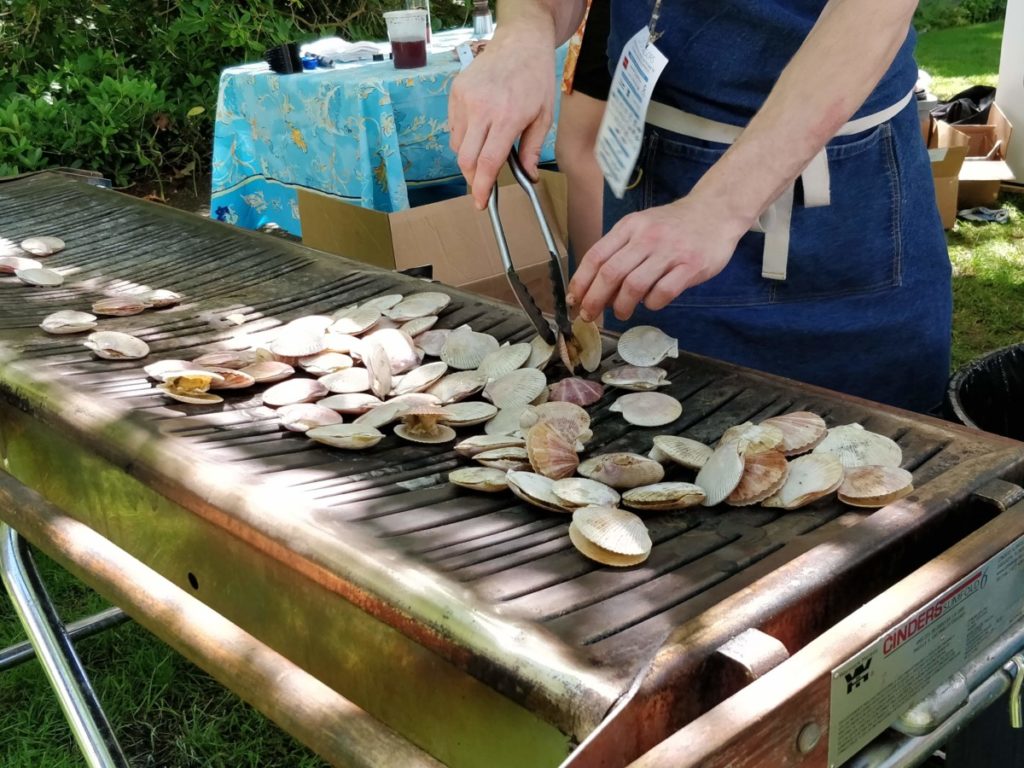 Grilling scallops on the spot. 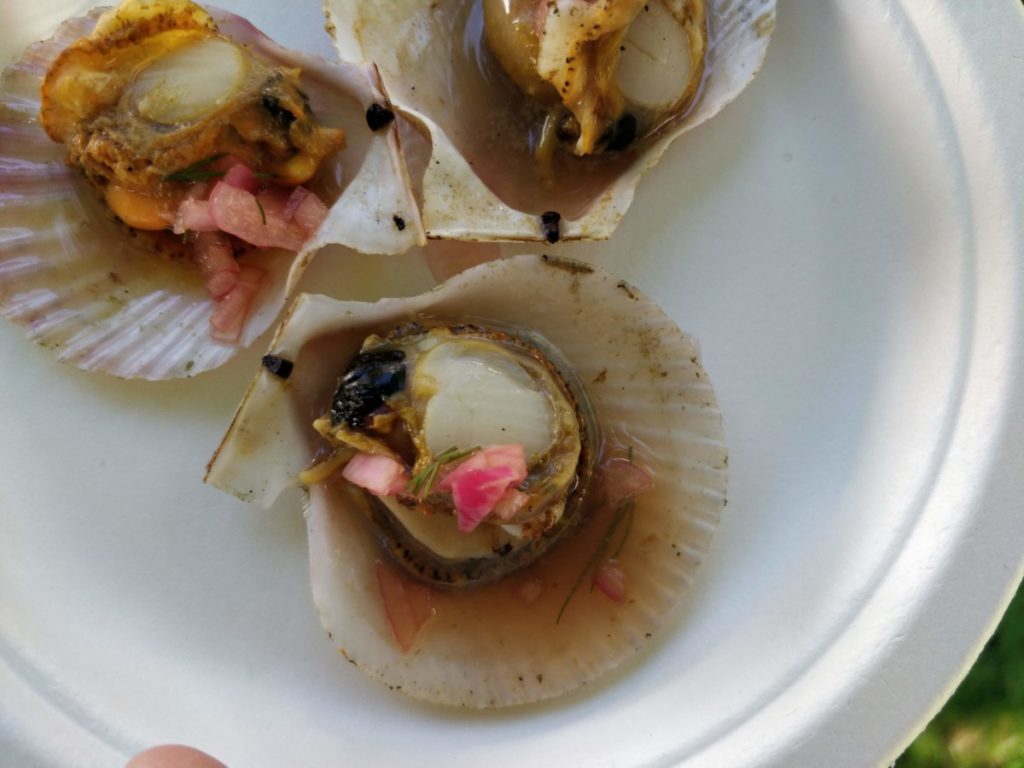 One serving had 3 scallops and this is the BBQ scallops with maple shallot mignonette. 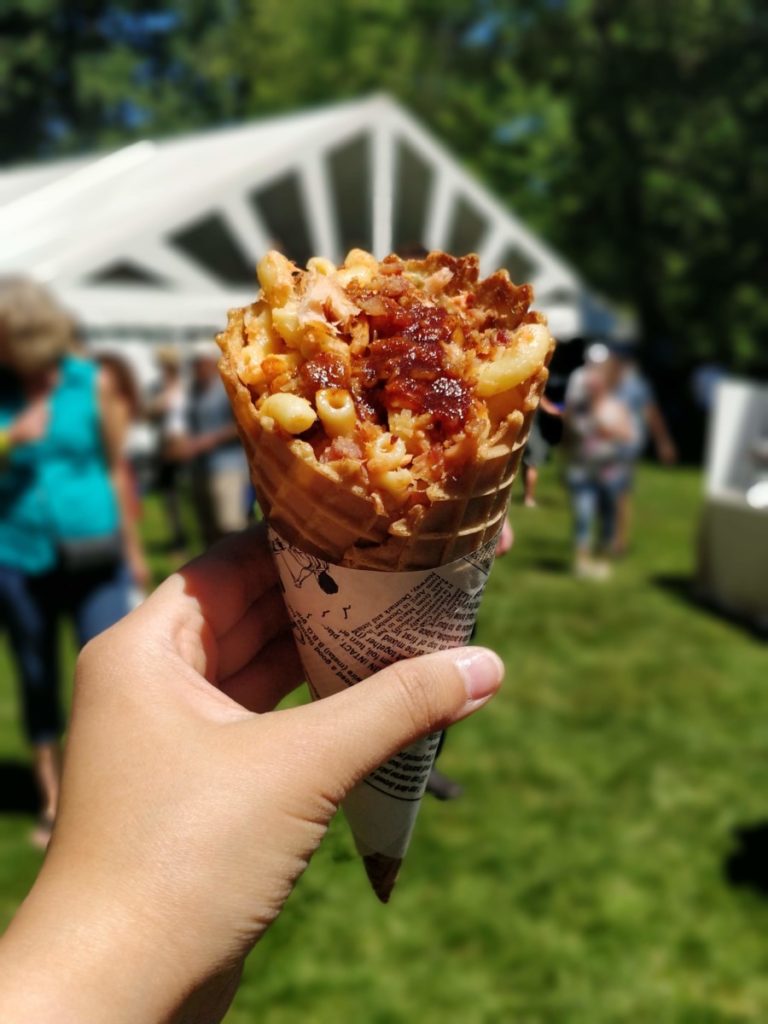 The High Tide Public House was offering a $4 Sockeye Macaroni Waffle Cone so I just had to get it! As weird as it seems, the flavour combination actually worked out really well. The smokiness of the BBQ sauce on top really contrasted nicely with the sweet waffle cone. 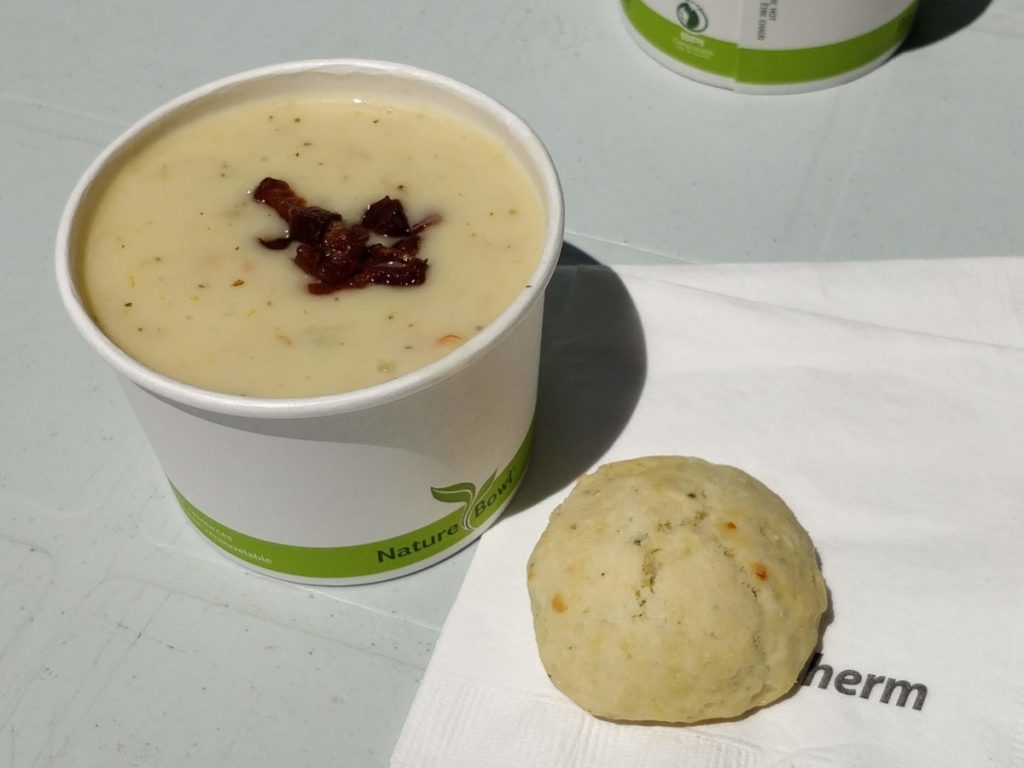 The Culinary Team BC offered a thick creamy seafood chowder with a homemade scone. 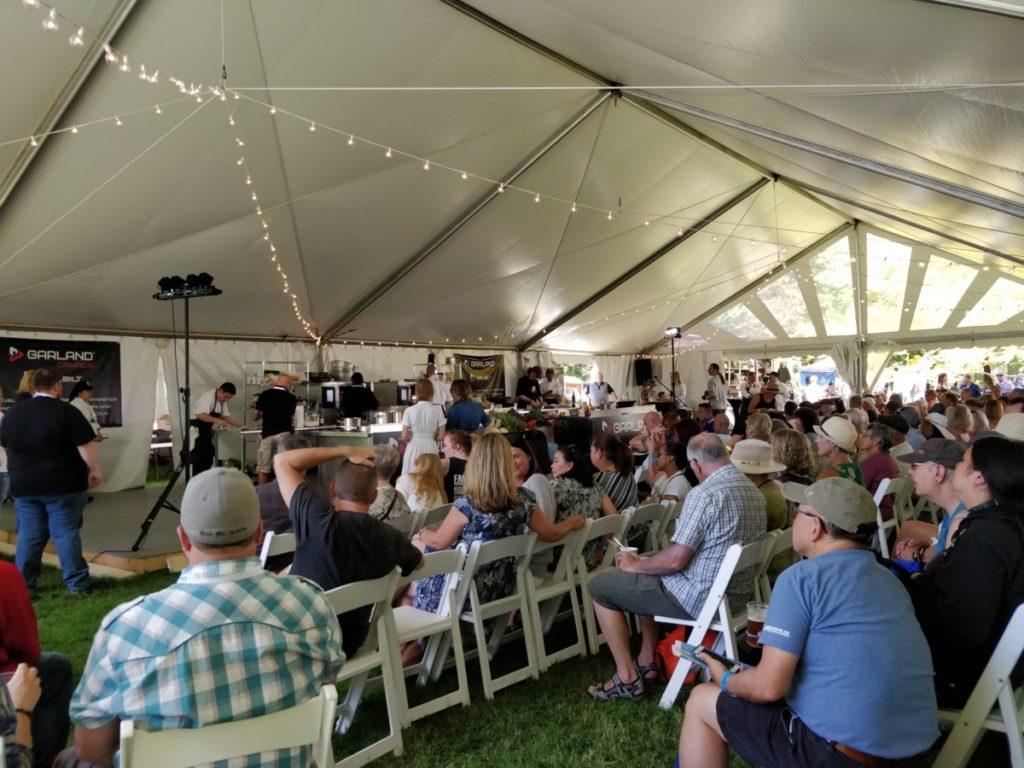 There were intense chef competitions and informative demonstrations hosted in the main tent throughout the Festival Signature Weekend so if you need to cool off and lie down, this is the place to be. 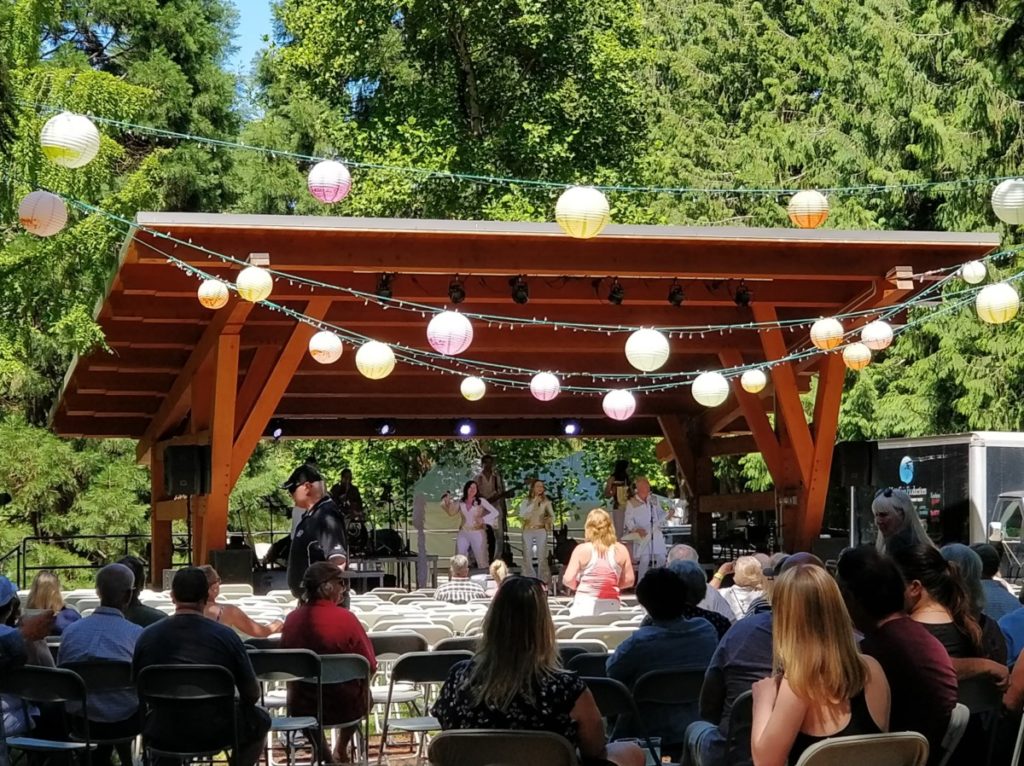 My friend Roanna (foodiegramca) was in love with this band called ABRA Cadabra and for good reason! They sang the entire collection of ABBA songs and got the crowd dancing and grooving like no other! 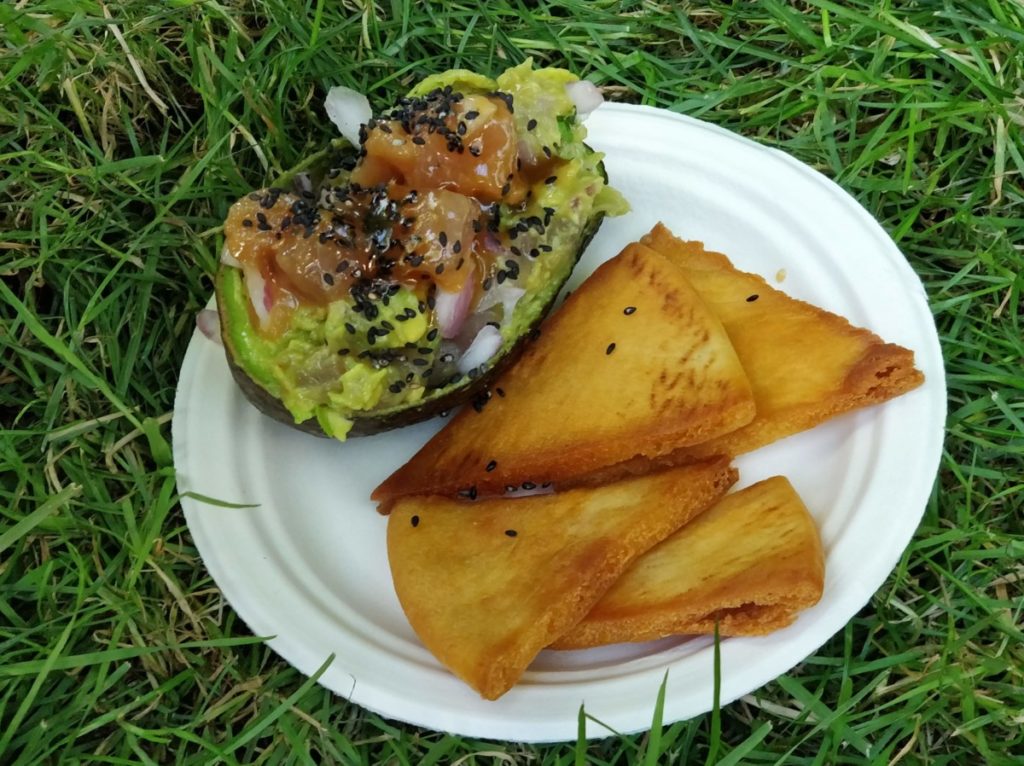 My favourite item from the Signature Weekend was this Guacamole with Fried Pita by Thrifty Foods. YES, I said Thrifty Foods! Their food truck had a never ending lineup and I even saw someone buy 10 of them to bring home! This guacamole was topped with Tuna Poke and it was just so amazingly fresh and refreshing. If they return next year, you MUST give their food truck a try! 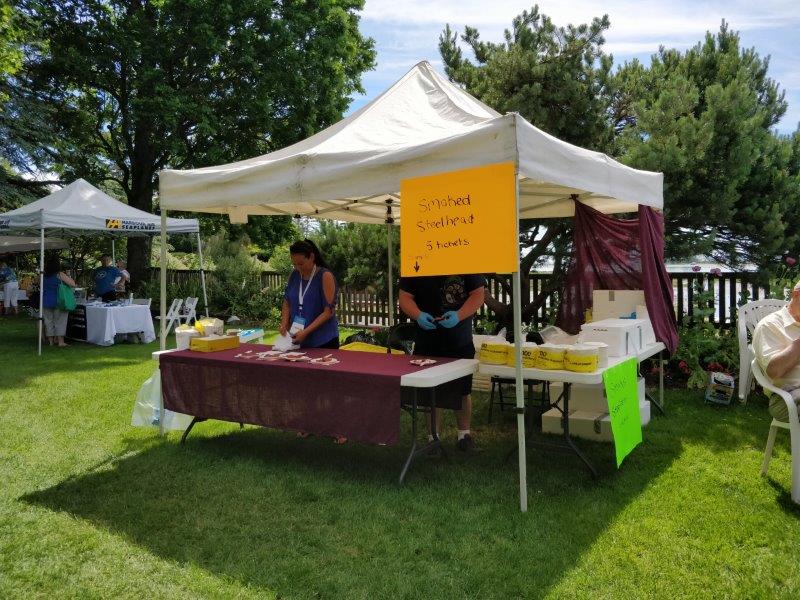 Unbelievably, this couple (or family) sold the best smoked steelhead I’ve ever tasted in my life. I asked what company they’re from but they don’t have one. While that is unbelievable to me, I hope they know how amazing their product is and hopefully consider turning this into an actual business one day! 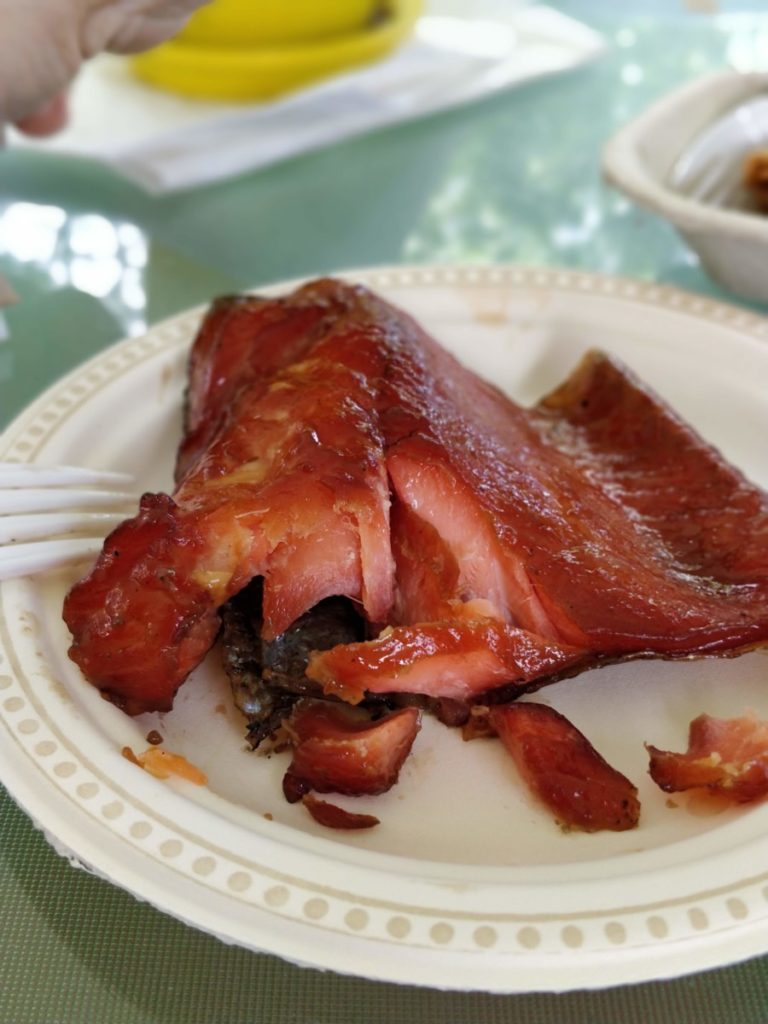 Look at the flake on this fish! It was caramelized to perfection, lightly salted, and so tender you could eat it with no teeth. 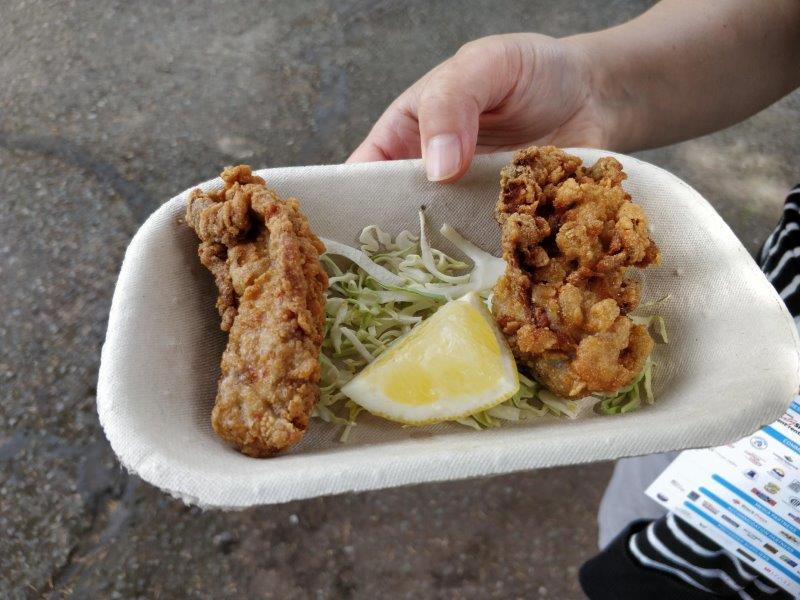 Mac’s Oysters had their own booth and they were serving up some scrumptious deep fried oysters with lemon and tartare sauce. The batter was thick, but not overwhelming, and the oysters were obviously as fresh as can be. Highly recommended.

The Picked Carrot Catering Company had two delicious offerings that I’m glad I got to try. 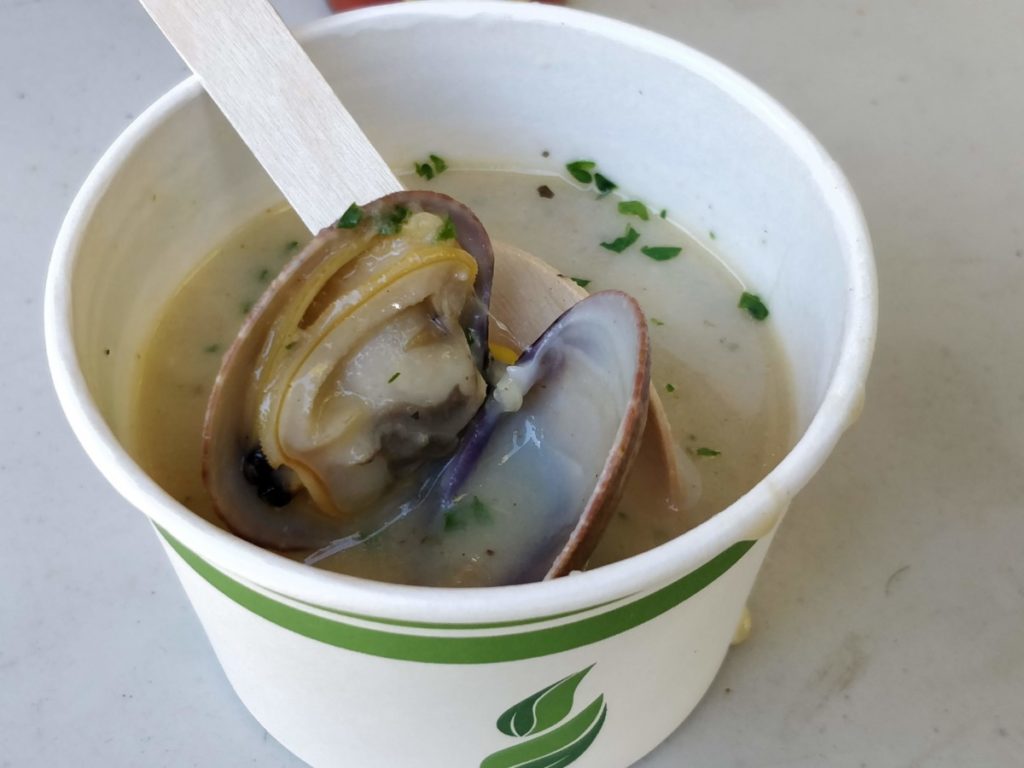 First up was the Smoked Clam Corn Chowder ($4). I loved the richness of the corn, combined with the brininess of the clams. I just wish I got more chowder for the price! 😀 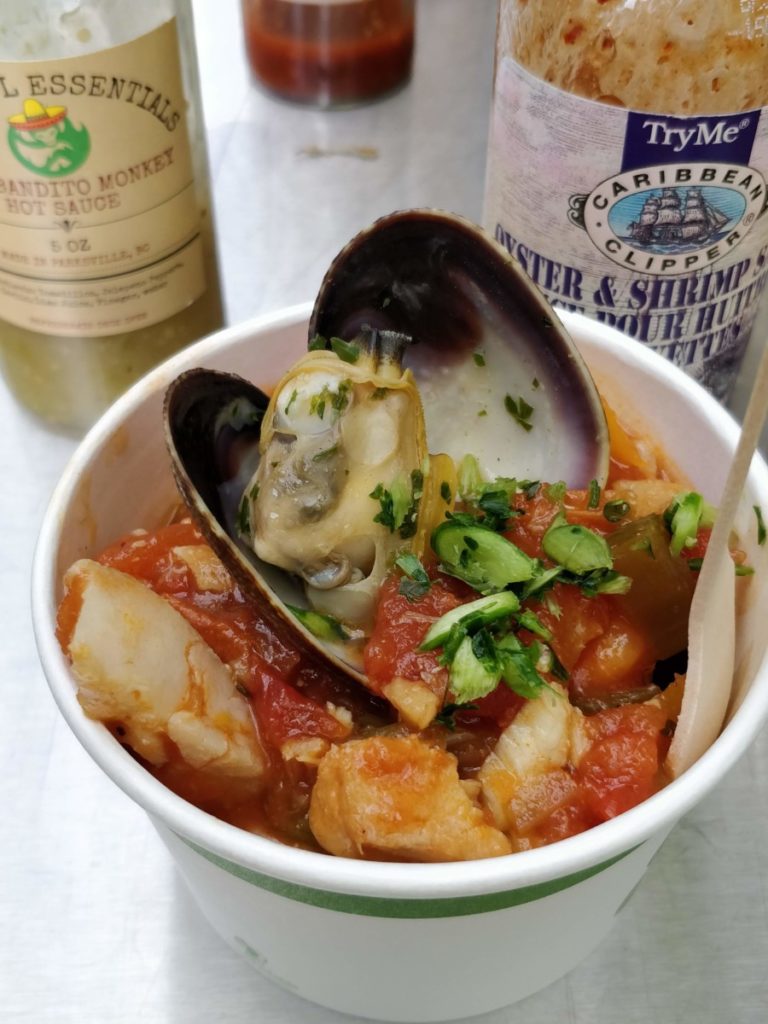 This is the Louisana Seafood Creole and its Mac’s Oysters (lightly smoked), steamed Manila clams, Pacific cod and snapper, in a mild Creole sauce served over Jasmine rice. 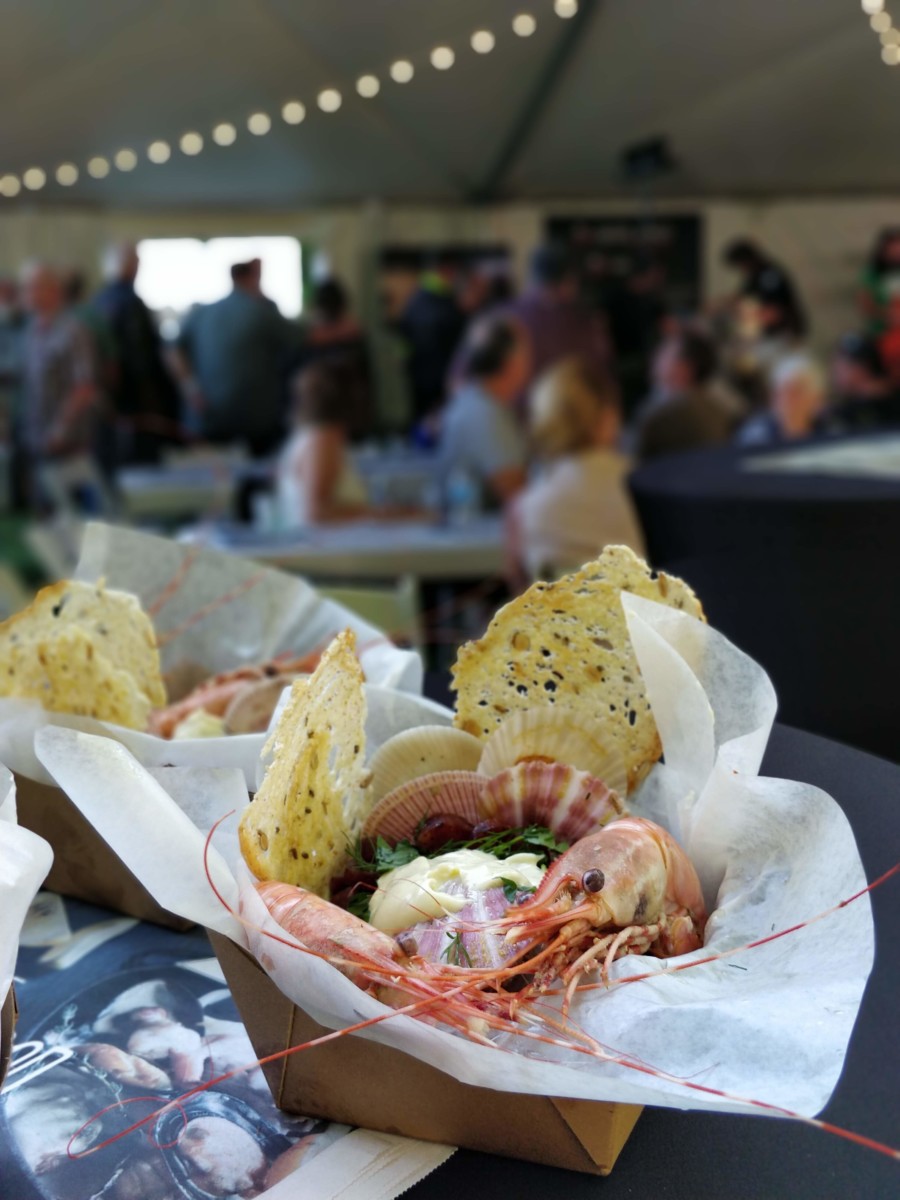 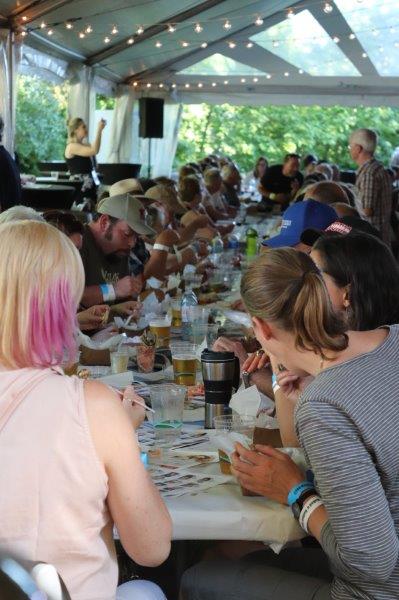 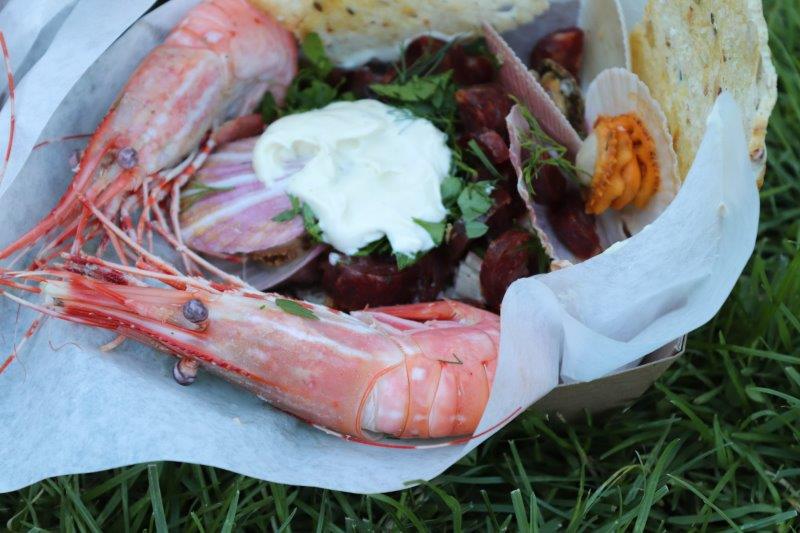 And guys, I have to be honest, the seafood was so incredibly fresh and delicious. It wasn’t full of overwhelming spices like some other seafood boils so it was very easy to eat a lot of it. Tickets were $85 and it included the Enter the Haggis Concert. 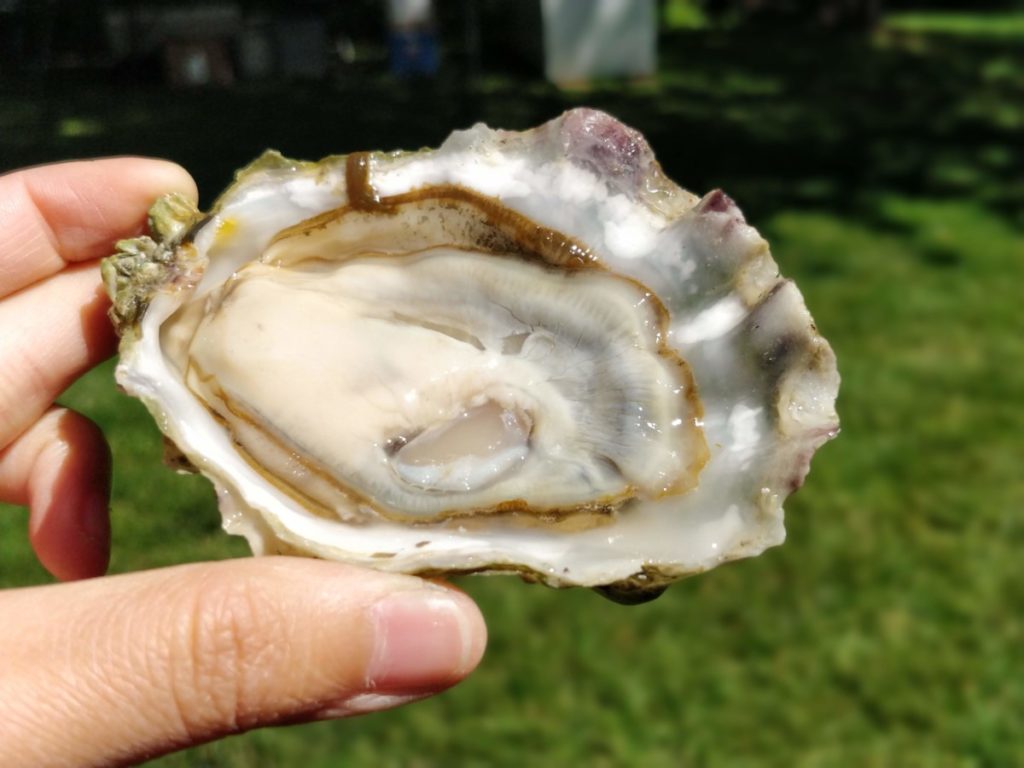 This year, they had an all-you-can-eat oyster happy hour called Shucked! and it showcased an extensive line-up of British Columbia oyster producing families and businesses. 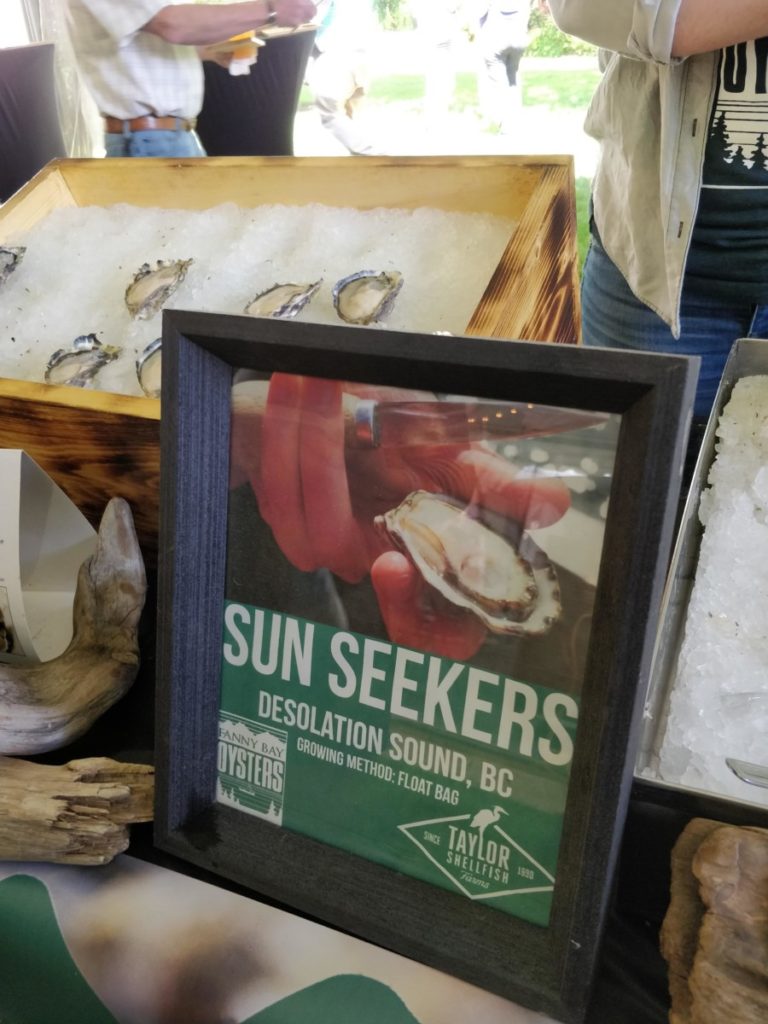 Fanny Bay Oysters was among the lineup and they brought their new Sun Seekers oysters grown on the Sunshine Coast in the Desolation Sound. 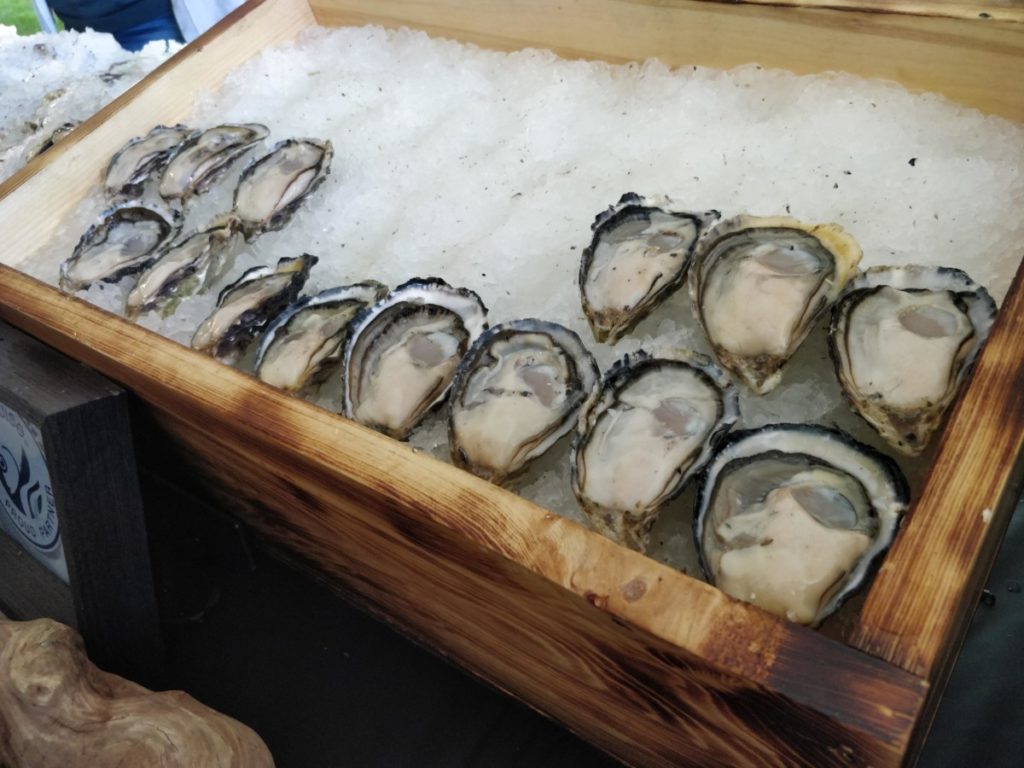 These plump babies are full of meat and it is due to how they’re grown. Fanny Bay uses a specific cage that doesn’t allow the the oysters to cling, thus, allowing them to use their muscles when getting shuffled in the waves. That in turn builds more meat and muscle while keeping the shell density the same. 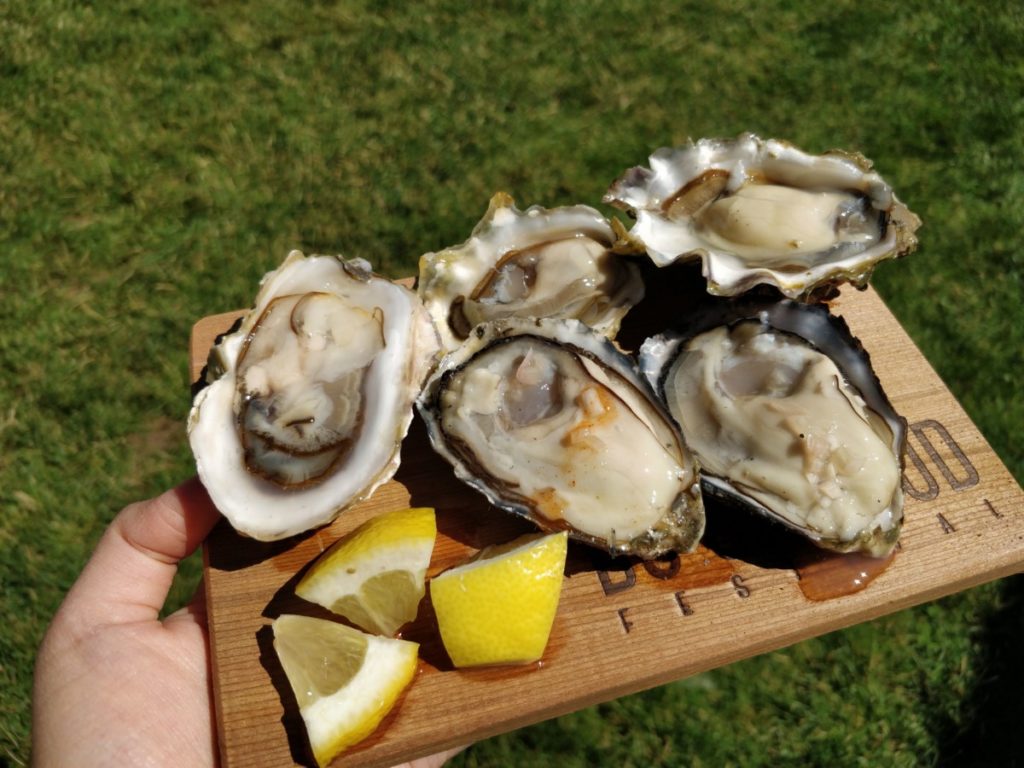 I don’t know how many oysters you can eat but if you’re able to eat more than 10-15 oysters in one sitting, you’ll get enough value out of this event. Tickets were $35 and the event took place from 3-6pm. 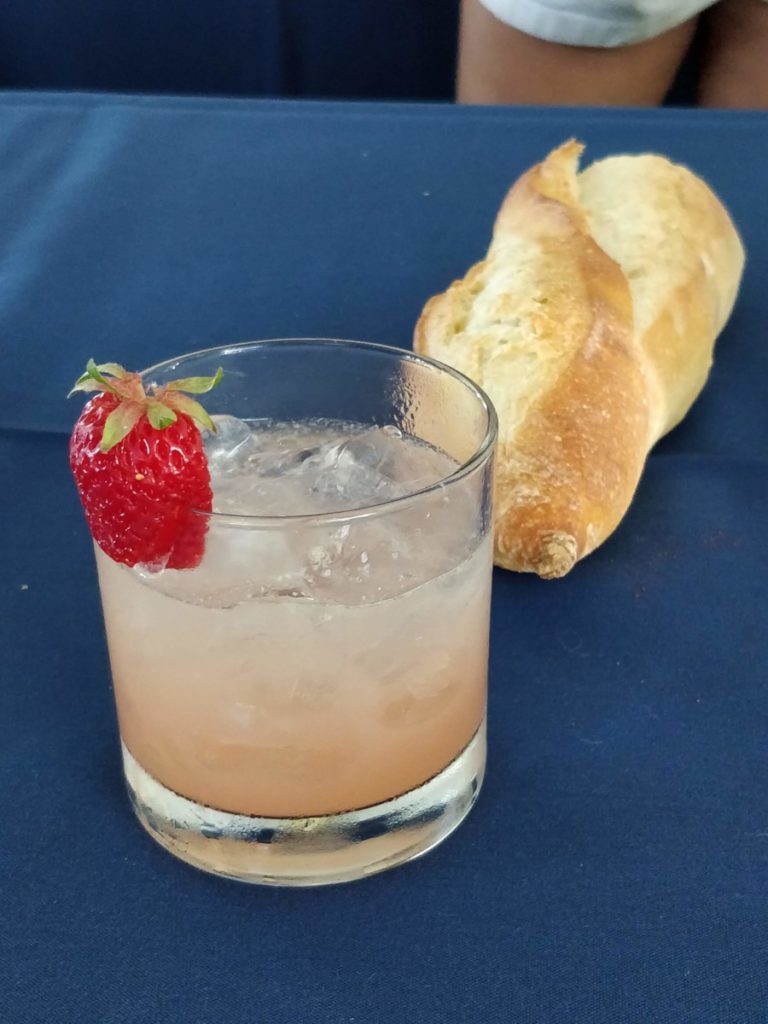 On Sunday, BC Seafood Festival hosted a VIP morning brunch fit for the greatest of foodies! The event was a surprise cooking experience/class with two award-winning Mixologists, Sabrine Dhaliwal from UVA Wine & Cocktail Bar, and Amber Bruce from the Keefer Bar, as well as four international and domestic seafood chefs (Abby Ferrer of Star Noodle in Hawaii, Scott Schneider of The Langham Hotel in NYC, Quang Dang of Araxi Restaurant in Whistler, and Tim Ho from The Langham Hotel in Hong Kong). 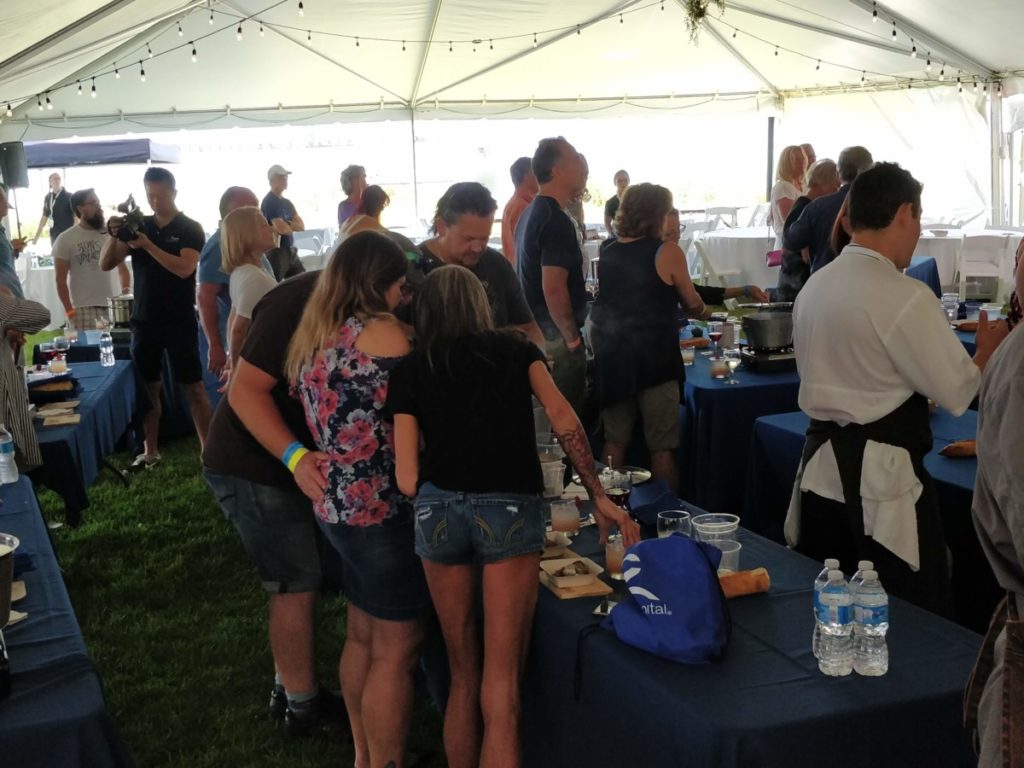 Each table had their own set of ingredients and we followed along with the chef on the stage. 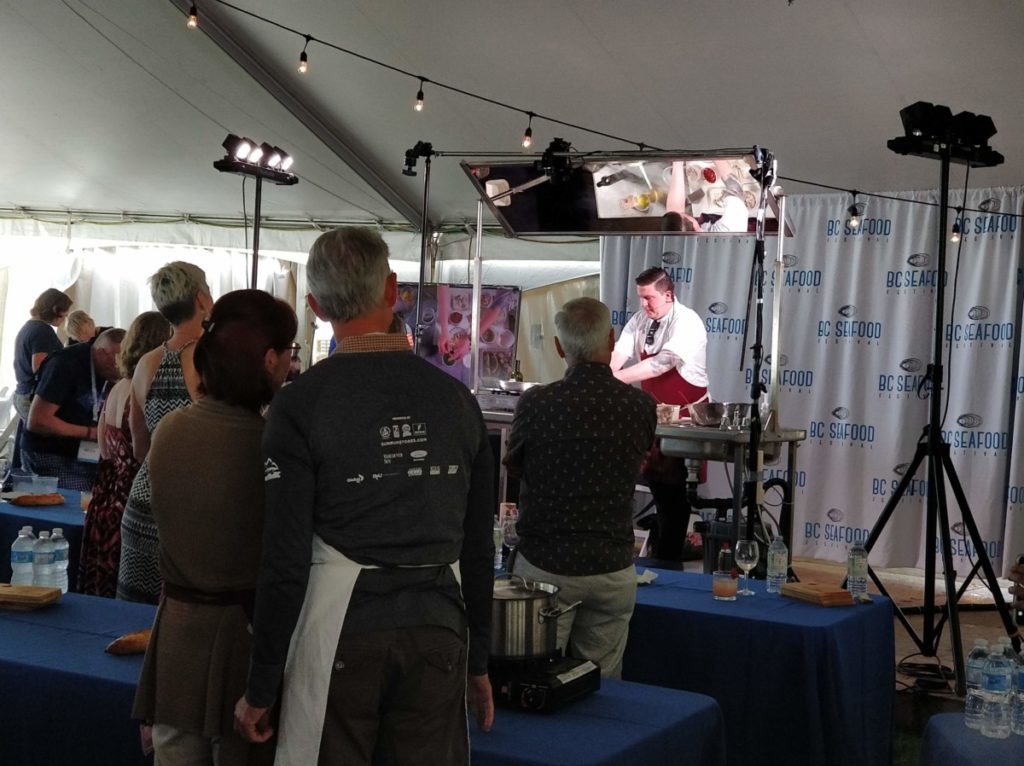 This reminded me of the cooking classes I took in highschool, but obviously way more elevated. The fact that these were executive chefs from world renown hotels around the world teaching us, it was mind blowing.

Chef Scott taught us how to make this amazing tomato and wine seafood stew with crusty bread. It was hearty and comforting all in one. Also, it was very easy to make! You just need to make sure the timing of the seafood is accurate because one min under or over can change the texture of the seafood quite dramatically. 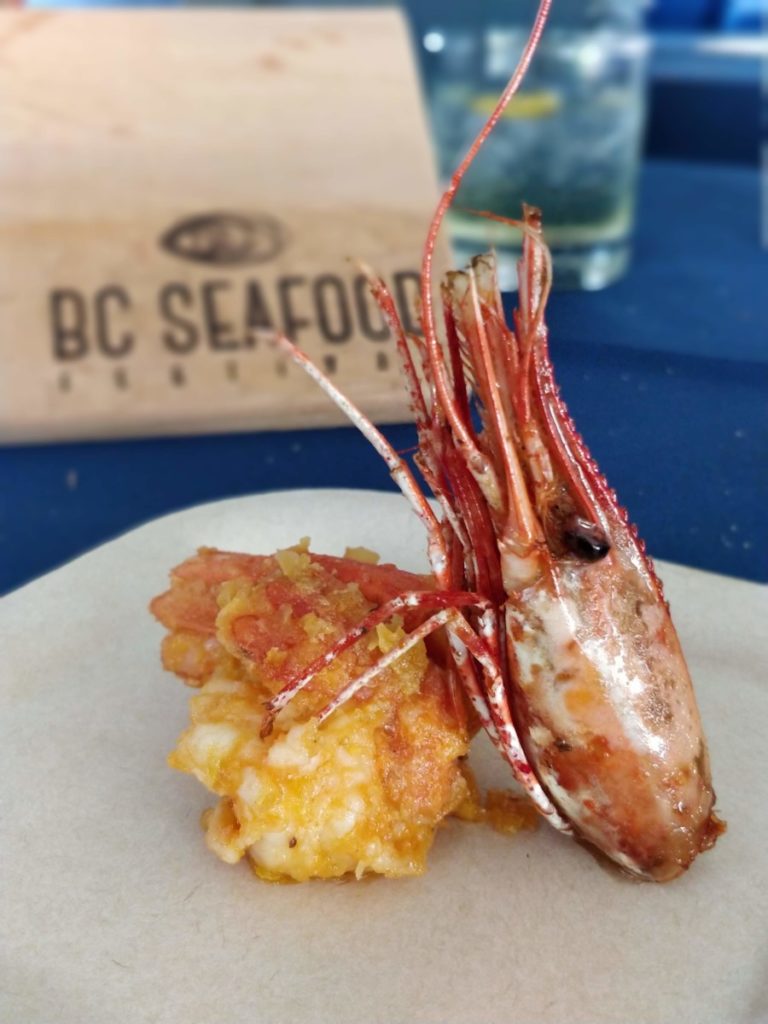 One of my favourite dishes was Chef Tim Ho’s salted egg yolk spot prawn. In the Asian food culture, one does not waste any part of the animal so I’m glad he stuck with his values and deep fried the heads so it could be edible. If you’ve never tried prawn heads before, I’d highly recommend being adventurous and giving them a chance! They just taste like crunchy prawn chips. 🙂

All in all, every BC Seafood Festival event was fabulous. My favourite was the Baked n’ Boiled Kitchen Party just because the BC Culinary Team did such a wonderful job executing on the seafood boil. Until next year Comox!

Disclaimer: My trip to BC Seafood Festival was complimentary including drinks, food, and tickets. All opinions are my own. 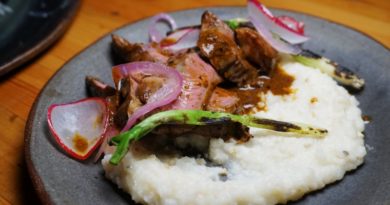 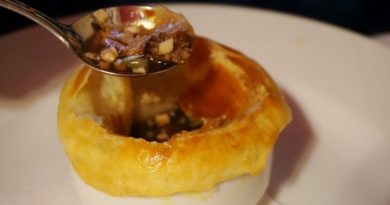 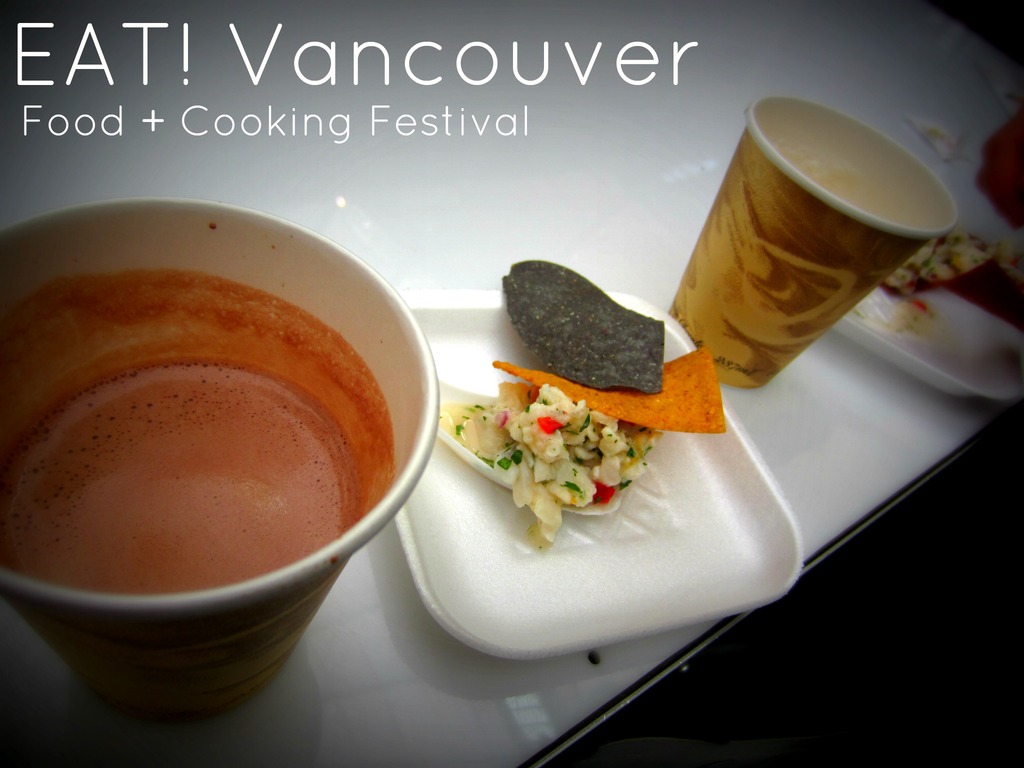