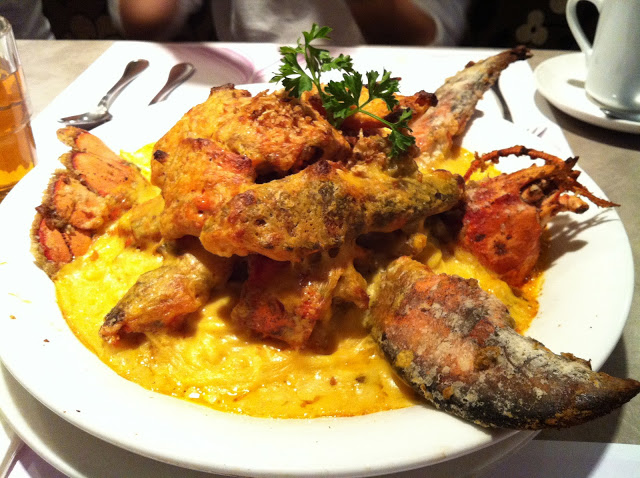 Hong Kong Style Richmond
October 3, 2011March 2, 2016 admin 0 Comments
As I mentioned in my birthday freebie post, my family and I came to Bauhina Restaurant for dinner to celebrate my birthday! 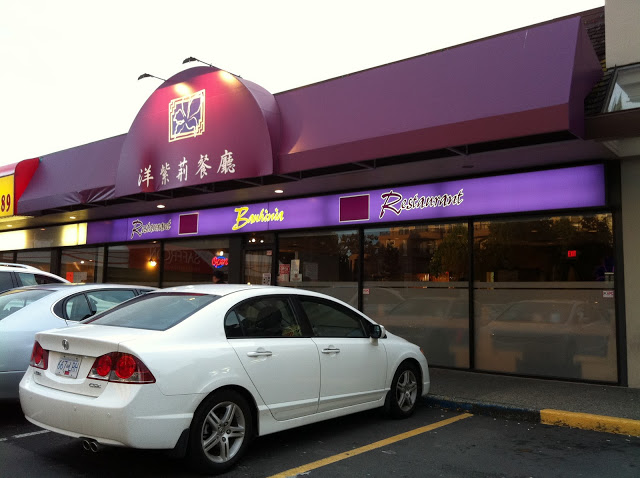 I noticed that they don’t have many customers, even during peak lunch/ dinner hours because when we arrived at 7:00pm (prime dinner time), there were only 3-4 occupied tables. 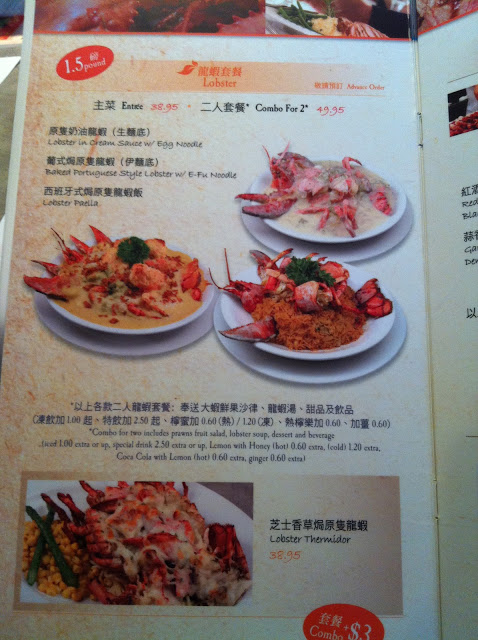 I saw the Lobster section of the menu before on my previous visit with Meta Knight (post below) and I’ve always wanted to come back to try it. So without hesitation, I chose to share this with Kirbro (my bro) as our entree. We chose the Combo for 2 ($49.95) and the “Baked Portuguese Style Lobster w/ E-Fu Noodle“. The combo also comes with a Prawn Fruit Salad, Lobster Soup, dessert, and a beverage. 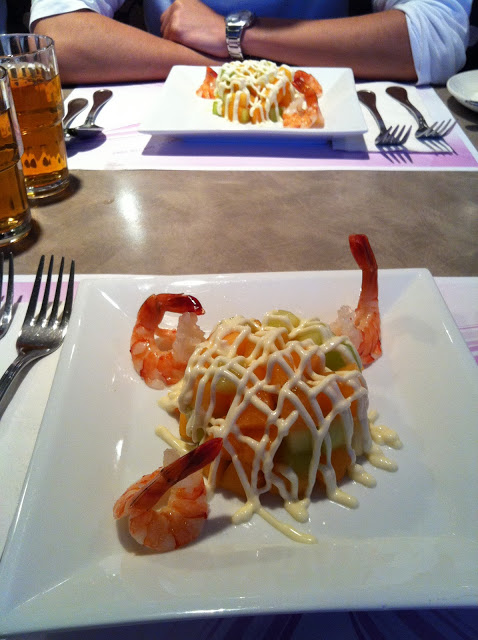 The prawn salad came first and both Kirbro and I received a plate. The salad essentially consists of three prawns, cubes of honeydew and cantaloupe, and Japanese mayo. The combination of ingredients may seem odd if you have never tried it, but it actually tastes pretty good together. 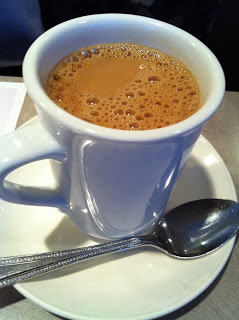 I ordered hot chocolate (right) and Kirbro ordered the hk style coffee. Both were good and nothing special. 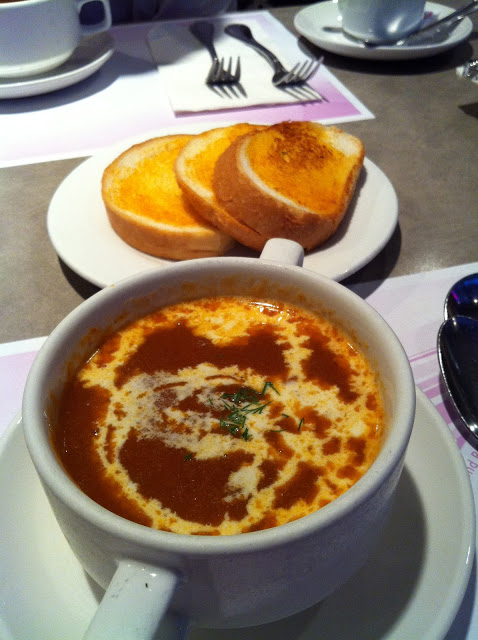 The lobster soup came with three pieces of garlic bread for the two of us (weird number as we can’t split that) and it was a bit disappointing. It was too salty for my liking and it was missing the real lobster taste. I really hope they didn’t use msg or lobster flavoured powder to make the soup. 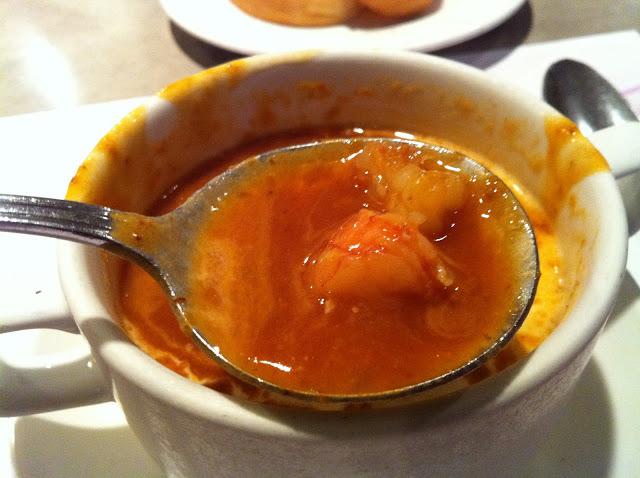 On the other hand, they did have a few pieces of shrimp in the soup. But… eh, this soup was still not very good overall.

When our main course arrived, all of us just stared. It had such a cool presentation! The lobster itself was not very large (probably 1.5lbs) but it was more than enough for the both of us due to all the previous courses.

Heh heh… does it freak you out to stare the lobster in the face? 😀

Anyways, the E-fu noodles that it came with were too soft (past al dente) but the Portuguese sauce that accompanied it was great. It had a mild curry flavour with a hint of coconut. 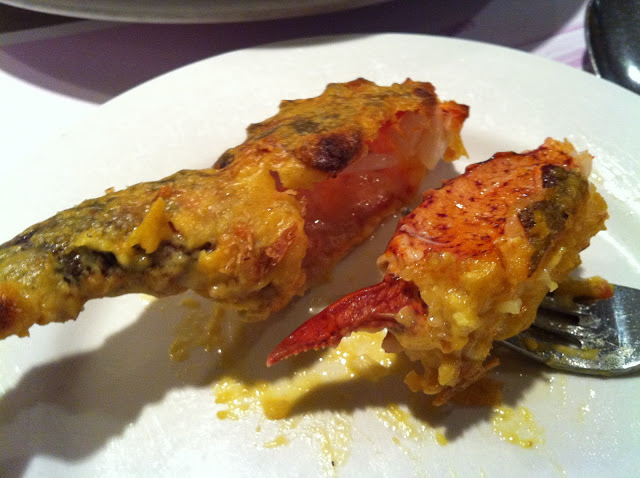 The lobster was first flash fried (don’t know if that’s a real term) and then baked. They were plump, quite juicy, and not overcooked so it’s a thumbs up for me. 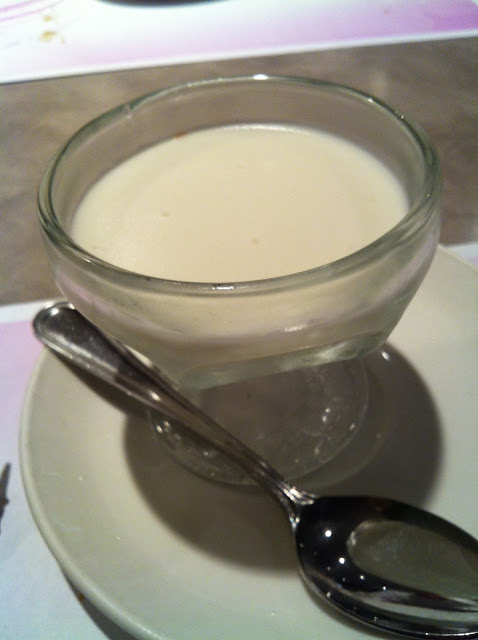 At the end of our meal, we got our “dessert” which was coconut mousse. I personally disliked it but the rest of my family who had a bite thought it was good. 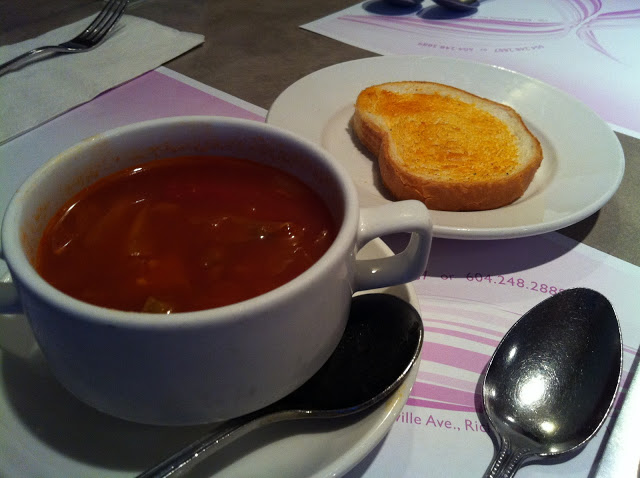 Kirpa ordered the Roasted Pork Knuckle with Sauerkraut with Combo Set ($19.95). The dish itself is $16.95 but if you add $3.00, you get a bowl of soup (Kirpa chose the Russian Borsch), garlic toast, dessert, and a beverage. 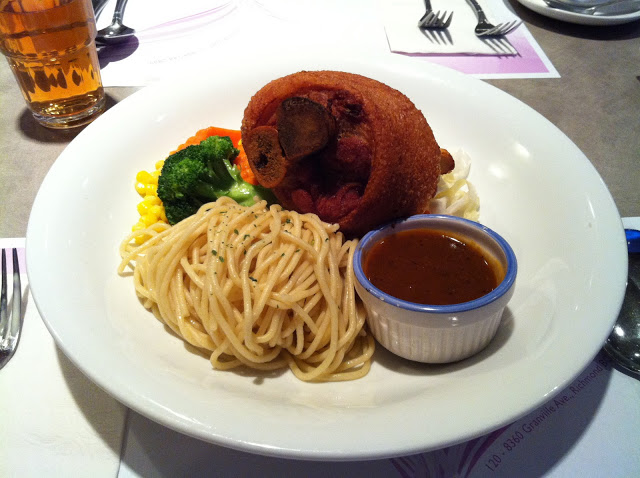 The pork knuckle is huge! I don’t know why they call it roasted pork knuckle because it is clearly fried…unless I’m wrong? 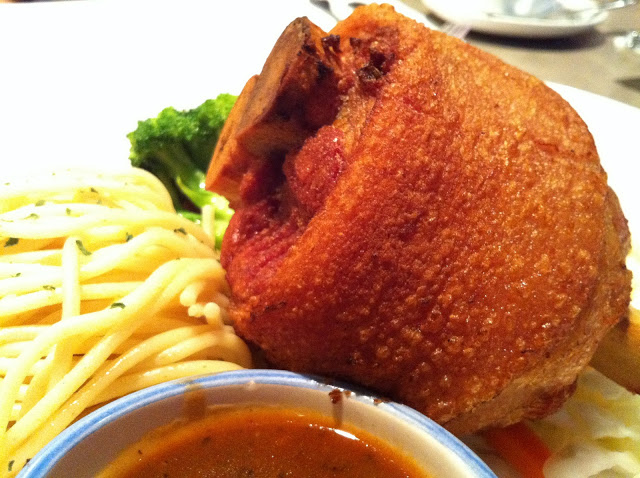 He loved the crackling skin but the meat was a bit too salty. He could only eat about 1/3 of it and we packed the rest. 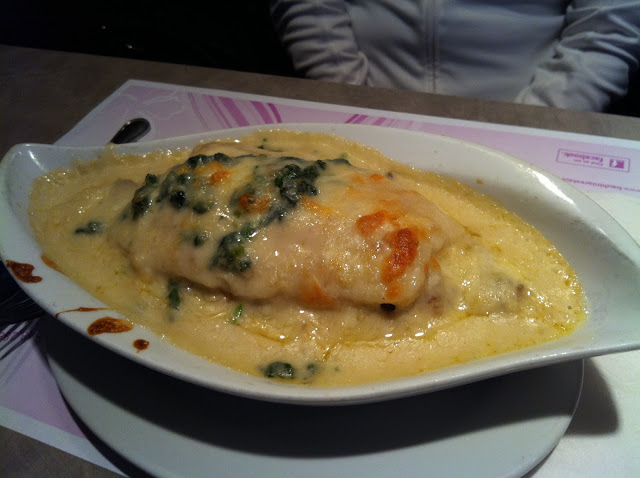 Kirma ordered the Baked Basa Fillet and Spinach Alfredo on Fried Rice ($12.95). Her dish did not have a lot of spinach and she said the overall quality was mediocre. 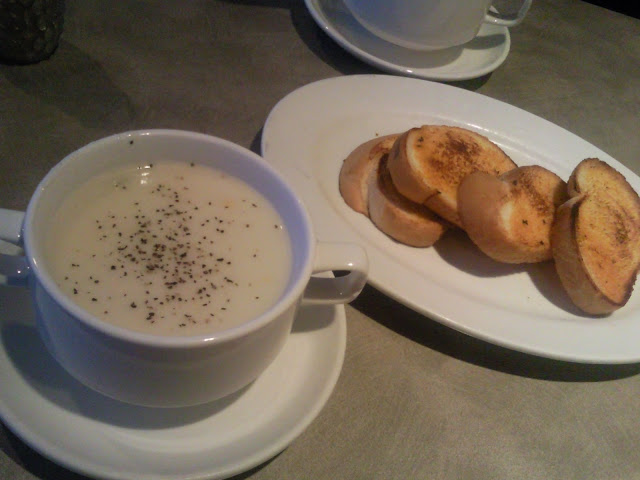 On my previous visit with Meta Knight after a canucks game last season, we both ordered a Charboiled New York Steak (5 oz.) with Lobster Tail ($14.48) because it was on special. The special was $28.95 for two which is the same as buying one at regular price ($28.95) and getting the other half off.
First, it came with soup (we both got cream of corn) and garlic toast. I am normally used to really bad cream soup from HK style cafes, but this one was pretty legit! Tasty, and lots of ingredients. 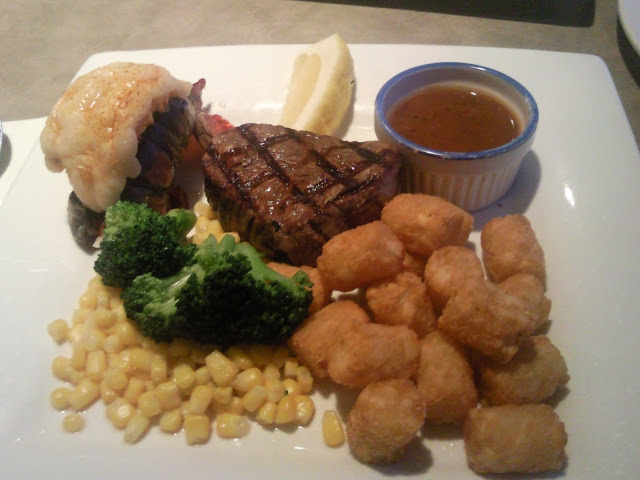 This was Meta Knight’s entree. He chose tater tots for his side LOL funny boy. 😀 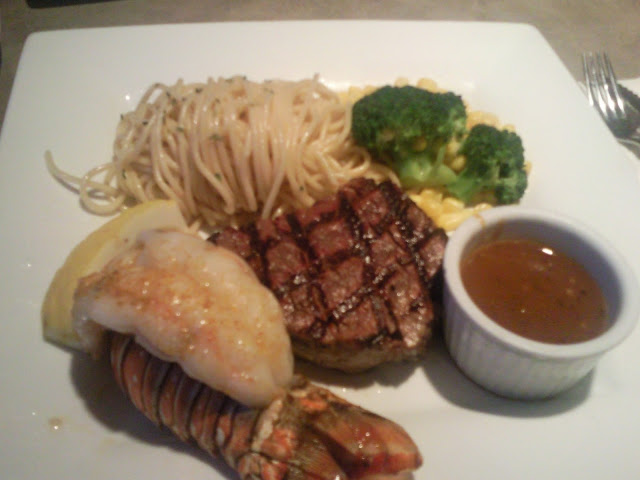 Sorry for the poor quality picture! But it’s basically the same as Meta Knight’s except I chose spaghetti as my side. The lobster tail (likely frozen) was very plump and succulent while the steak was alright. Obviously, it’s not “The Keg” quality, but it sure was a good deal for around 14 dollars and I was happily satisfied.
I remember they gave us some lychee jello for dessert after the meal and it was super bland. All their desserts are pretty fail but I was okay with it since the entree was good.
Based on these reasons: 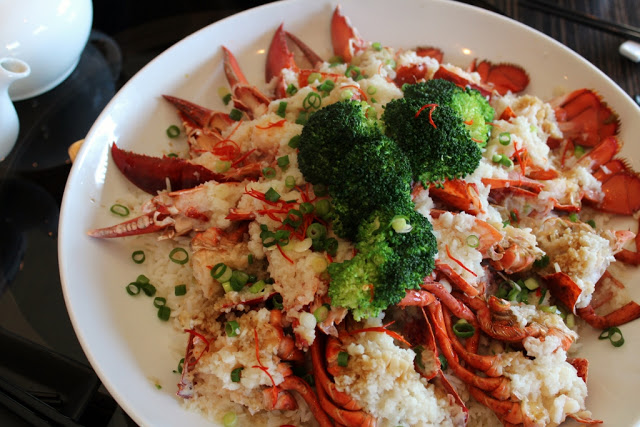